Posted in: No Huddle by Brent Lorentson on June 9th, 2016 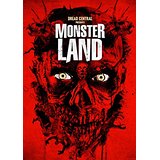 For the horror fans out there, I’m sure you’ve noticed that there have been a lot of horror anthologies being pumped out.  It’s a concept that I can appreciate, but even as a fan, enough is enough already.  It’s great to see talented people coming together to film a handful of short films, all with a collective theme, and seeing how the filmmakers use the platform to tell the story.  For me the VHS series is my favorite of the bunch; not every story will be everyone’s cup of tea, but there are at least one or two stories per DVD that people can enjoy.  When it comes to Monsterland, I feel this is a film that somewhat cheats the rules of a true anthology, because it’s really just a collection of short films made independently of one another that seem to have been purchased for this one release.  The problem isn’t with putting a bunch of short films together to release for one DVD release; instead what bothers me is that of all the short films that are out there, these are the ones that were picked.  Not all of them are bad, but for the amount of talented upcoming filmmakers out there, it’s hard for me to believe that this is the best that could be found for this release.

We are brought into the story as we see a movie theater that is under attack by monsters. Bodies and blood are everywhere, but one guy armed with only a baseball bat decides to stay and watch the movie that is playing; the movie just happens to be Monsterland.

As I mentioned, each of the stories are independently made and were never intended to be part of an anthology.  The best of the bunch for me are Grey Matter and Hag. While the others were mostly shrug-worthy entries, there was one story that I don’t wish to throw under the bus but for me personally was so bad I simply could not even finish it.  We all have our own tastes, and I’m sure there are people that will enjoy it for one reason or another, but personally I had to skip past it (I’ll let you all guess which one this happened to be).

Grey Matter follows Simon (Ebon Moss-Bachrach), an office worker who randomly wakes up in the middle of the road and covered in blood.  The blood is from a hole in Simon’s head that holds a talking parasite. Yes, you read that right.  It’s the oddball nature of the story that grabbed my interest, and it helps that it was a well-produced short. The problem is, beyond the gimmick of the talking parasite, there isn’t much to the story beyond Simon trying to date a coworker.

Hag follows Scott and Marie Somers, who are going through counseling together. Marie (Megan Duffy) is a sleepwalker, and it has become a more serious problem for her husband, Scott (Drew Wicks), who suffers from sleep paralysis. The trouble comes when Scott starts to see an evil old woman in their bedroom who seems to have some bad intentions in regards to Scott.  This was the most effective story of the bunch.

The biggest problem I had with the other shorts had to do with how they tried to juggle both horror and humor. Whether it’s giant jellyfish or a story about a father doing a gender swap with raising his unique child, all the films relied too much on humor. Is it too much to ask for a film that just goes for the jugular and aims to do nothing more than scare an audience?  I’m watching these shorts and just feeling just a lack of originality or even a grasp on what horror is. I’m disappointed with this release; this could have been something special to help find an audience for some up-and-coming filmmakers in the horror genre, but none of these titles wowed me, none of them had me curious about what they’d have in store for us next. For those considering taking a trip to Monsterland, I think you’re better off searching for horror shorts on YouTube rather than sitting down with this.

Brent Lorentson is a horror writer and film critic based out of Tampa, Florida. With a BA in Digital Film, he co-wrote and co-directed Scavenger Hunt. His short stories have appeared in various horror anthologies. In 2019 his short script Fertile Blood will be a part of the anthology horror film Slumber Party. He is currently working on his first novel A Dark and Secret Place set to be released in late 2019. Favorite Films: Taxi Driver, Fight Club, I Saw the Devil, The Wild Bunch, Dawn of the Dead, A Clockwork Orange, Pulp Fiction, Heathers, The Monster Squad, and High Fidelity.
Roots: The Complete Original Series (Blu-ray) The Confirmation (Blu-ray)