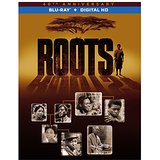 “Roots: The Saga of an American Family literally blazed across this nation’s screens.”

In 1977 the entire country became Africans for eight consecutive nights. The name Kunta Kinte would become a household name. It was unprecedented on so many levels that even the ABC executives that made the decision to air it believed it was going to be a ratings disaster. The decision to run it on so many consecutive nights was made to avoid the ratings collapse from lasting more than a week. But by the time the final episode aired, Roots had become the most-watched television mini-series of all time. The final episode was the most-watched episode of television of all time. The mini-series record stands 40 years later. The episode record has been broken only twice since then. First it was the “Who shot JR” cliffhanger on Dallas, and eventually the final episode of M*A*S*H would take and continue to retain the record. If only those executives had known,  it would have been a sweeps event instead of the usually dead January slot in which it aired. It was one of the first examples of event television. Businesses closed early. Vegas shows were cancelled because everyone was in their hotel room watching Roots. Before it was over 130 million people saw at least part of the mini-series. At the time there were just under 200 million people alive in the country. The only question I have is what were the other 70 million people doing?

Alex Haley was a beat writer for Playboy Magazine. Little did Hef know that he was polishing his craft so that he could engage in a writing project that would take him 12 years. He was always fascinated by stories his grandmother and aunts would tell of an ancestor named Kunta Kinte. He decided to trace that oral history and put it down in writing. The result was Roots.

The mini-series went into production before the book was even finished. Haley served as a consultant and insisted that the script be written by whites. He thought it would add some power to the message that way. It turns out he had nothing to worry about. The mini-series sported some of the top names in television at the time. We’re talking names like Ed Asner, Lloyd Bridges, John Amos, Robert Reed, Olivia Cole, Vic Morrow, Ben Vereen, Louis Gossett, Jr., Carolyn Jones, Sandy Duncan, Chuck Connors, Ralph Waite, Lorne Green, George Hamilton, Scatman Crothers, Richard Roundtree, Georg Stanford Brown, Gary Collins, Beverly Todd, John Shuck, Cicely Tyson, and Doug McClure, and it introduced us to a future blind starship engineer named LeVar Burton.  It was produced by William Blinn, an old hand at television drama who gave us shows like Starsky & Hutch. The result is a television project that literally changed the historic dialog in America.

The story begins with young Kunta (Burton) as he has just become a man in his African village. He is searching for a log to make his brother a drum when slavers capture him and bring him to America in the days before the Revolution. Here he’s sold and given the slave name Toby. But Kunta never gave up his free spirit. Eventually they had to chop off half of a foot to keep him from running away. But he made it a point to pass on to his daughter who he really was and where he came from. That oral tradition carried through four generations until the Civil War and an end to slavery. The series doesn’t pull any punches, and it’s a hard film to watch at times. It’s likely the most accurate portrayal of American slavery up to that time. The network managed to get away with an unusual amount of violence for 1970’s network television and the very first allowance of female nudity in the form of members of the African village.

But it’s really the performances that make the most impact here. You just had never seen that powerful a lineup. There are too many to really focus on any single character or performance. Certainly both Burton and John Amos set themselves apart as Kunta at various ages. Louis Gossett, Jr. as Fiddler was also one of the most compelling characters. Ben Vereen certainly stood out as Kunta descendant Chicken George, who would actually earn his freedom through his skill at training fighting cocks. In a bit of irony, Vereen is playing a descendant of Burton’s. In Star Trek: The Next Generation he would go on to play Burton’s father. It really is impossible to find a flawed performance in the entire 12 hours. Top it off with music by Quincy Jones. If you haven’t seen it, you should.

Roots is presented in its original full frame broadcast aspect ratio. The material is 40 years old and isn’t going to be a high-definition showpiece. Still, the material looks pretty good. The grain of the source material has been retained, and there is certainly more detail to be found here than anyone could get in 1977. In fact, the aging makeup looks rather bad in high definition. Someone in the makeup department equated old age with bags under one’s eyes. It’s a testament to the material that even the silly makeup seen with all of its flaws in high definition won’t take away from the impact of the production. Black levels are fair, and colors are pretty much solid reference to 1970’s film stock.

The DTS-HD Master Audio 2.0 track is not there to call attention to itself. The dialog is fine. The music sometimes sounds a bit distorted. I suspect there was little one could do without drastically changing the original sound.

You get eight episodes on three discs. The extras are all on the third disc.

Roots – The American Story Continues: (27:06) Celebrities like James Earl Jones and Blair Underwood talk about the impact of the show on their own lives and families.

Roots – The Cast Looks Back: (29:01) Cast and crew talk about the impact both the series and their part in it had on their lives. Two of the actors claim that there were moments they blacked out and believe the spirit of their ancestors took over their performance.

Crossing Over – How Roots Captured An Entire Nation: (20:33) Former network executives along with cast and crew talk about how the show got made and the serious concerns they had going in. They also talk about the violence level and the first time a network was permitted to show female nudity.

Connecting With The Past: (13:21) Cast and crew talk about their own family lines.

The Struggle To Make Roots: (22:58) This one also talks about the challenges and concerns going into the production. The cast talk about the sacrifices they made to bring out the strong emotions and themes.

David Frost Interview With Alex Haley: (36:42) An episode of David Frost where he talks to Haley before the mini-series. He talks about the ongoing work he’s doing.

Now a new version of Roots is airing on television. I have not seen it, so I won’t try to compare them here. I have quite mixed feelings about the idea. This production was so close to perfection in the impact it made. There had already been a sequel that continued the story to Alex Haley himself. I’m not sure what a remake might have to offer. These performances would be so hard to match, let alone beat. The film teaches a lesson about the difference between blacks and whites. “‘Course there ain’t all that much difference when you gets right down to it.”

Gino Sassani is a member of the Southeastern Film Critic's Association (SEFCA). He is a film and television critic based in Tampa, Florida. He's also the Senior Editor here at Upcomingdiscs. Gino started reviewing films in the early 1990's as a segment of his local television show Focus. He's an award-winning recording artist for Omega Records. Gino is currently working on his 8th album Merchants & Mercenaries. Gino took over Upcomingdiscs Dec 1, 2008. He works out of a home theater he calls The Reel World. Favorite films: The Godfather, The Godfather Part II, The Body Snatcher (Val Lewton film with Karloff and Lugosi, not the pod people film), Unforgiven, Gladiator, The Lion King, Jaws, Son Of Frankenstein, The Good, The Bad And The Ugly, and Monsters, Inc.
Ghostbusters (UHD Blu-ray) (4K) Monsterland