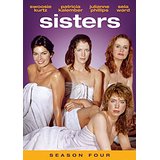 I previously reviewed Season 3 of Sisters in May of this year, so Sisters lovers, you can go back and review. In dealing with this season, I am going to focus on character, because as much as any show can, this show focuses on the differences between people who are very close with ties of family and love. Sisters is well known to be a women’s show, and I wouldn’t disagree, nor would I intimate that it is a bad thing to be labeled as such. So many shows have been focused on an assumed male dominance in society, but Sisters was a show that brought the power of women to the forefront. It was also one of the first shows to show a female audience had an important demographical significance. But I don’t want to make this an ideological dissertation. I am simply going to look at the purity and relevance of the show, even today. The show originally ran for six seasons from 1991 to 1996, but it still resonates as a special and unique show. It was far from perfect, but its positive qualities cannot be denied. It may have been little more than a nighttime soap opera with undertones of comic absurdity. It also was in the forefront of issues at the time including dealing with rape, AIDS, and parental rights.

The characters were the focus, and each character had a unique perspective. Alex (Swoozie Kurtz) is the eldest sister who is well off, self-centered, and superficial but constantly deals with adversity with unknown reserves of strength. Teddy (Sela Ward) is impulsive, free-spirited, and strong-willed. She often takes a combative and argumentative stance but is always there for anyone who needs her. Georgie (Patricia Kalember) is stable, centered, and family-oriented but has been given to bouts of severe depression. Frankie (Julianne Phillips) is a workaholic businesswoman and youngest sister who has hidden insecurities and is hypercritical of all her failures. The husbands were somewhat secondary figures, but Georgie’s husband, John (Garret M. Brown) was the most consistent presence over the life of the show. John was stable and reliable and loving, but his marriage did have ups and downs nonetheless. The second most consistent male presence on the show was Mitch (Ed Marinaro), who was originally married to Teddy and then switched over to Frankie. Mitch was best known for being a little pigheaded and emotionally stunted but ultimately striving to be the best person he could be.

This season heavily featured George Clooney as Detective James Falconer, who was introduced as central to the investigation of the rape ofTeddy’s and Mitch’s daughter, Cat (Heather McAdams). Simon Bolt (Mark Frankel) returns to stir friction. Big Al Barker (Robert Klein) is actively involved with Alex this season. Ashley Judd and Paul return (including an appearance by Naomi Judd, who is Ashley’s real life mother). Norma Lear (Nora Dunn) also has a strong storyline as a confident and strong lesbian character.

Over all the corny humor and soap opera tropes can be a bit cloying, but ultimately it is an important and unique show that deserves a significant place in television history.