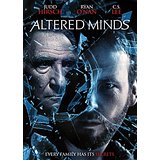 “I heard that if you don’t give him a name, he’ll turn the children into icicles.”

It has been a long time since I have seen a decent psychological thriller, and Altered Minds is a great film to bring me back to this type of film. To give readers a frame of reference, films like Identity or Session 9: they are most certainly part of the “psychological thriller” genre, but you are led to believe there are supernatural forces at work during the film. Then, just when you think the film will have a supernatural climax, you are offered a twist ending that is not supernatural and actually makes sense to the plot. I won’t say that Altered Minds is better than Session 9, but it is definitely on par with Identity in terms of how much I enjoyed myself while watching the film.

The film tells the story of horror novelist Tommy Shellner (Ryan O’Nan), the estranged son of Dr. Nathaniel Shellner (Judd Hirsch), finally visiting his father for his birthday. When he arrives at the house, his mother and his brothers and sister greet him. We learn very quickly that this is a rather somber occasion, as it is heavily implied that this might be the doctor’s last birthday. As the story progresses, you begin to realize that Tommy is not attending this party to celebrate, rather, to confront his father about many skeletons that are hiding in the family closet, including a mysterious urn that Dr. Shellner swears does not exist.

The quote I used to introduce this article is in reference to children building a snowman in the movie. With just that context, that line of dialog is creepy enough as it is. Not to mention the fact that it is repeated in the film a number of times by different characters in different contexts, which creates a strangely ominous tone throughout the film. I love it when a film can creep me out just by using a few words. The most amount of praise I have for this movie is attributed directly to the writing: it is smart, cohesive, and creative. That line of dialog stuck with me, and it is original, and it fits within the back-stories of each of the characters so well. As I said before, it has been a while since I have seen a decent psychological thriller. It is really hard to talk about how great the writing is without spoiling the entire film, so a good take away is that writer/director Michael Z. Wechsler wrote every line carefully and deliberately, and that shows twofold.

On the other hand, the visuals of the film work both for and against the whole. More often than not, Wechsler is able to achieve this really creepy feeling through slow camera movements and dimly lit sets, and that is fantastic. Just like his script, his camera movement is very careful and deliberate and he achieves many moments where my hair stood up on end. However, at any point in the film when characters go outside into the snow, we see very obvious CG breath emanating from characters’ mouths, just to “prove” it is cold outside. While the production team might believe this adds to the realism of the movie (I’d assume that the outdoor scenes were shot on a set), if anything it was the one thing that distracted me the most. I saw snow, I get that it is cold; I will not be confused if there is a lack of foggy breath for my viewing pleasure.

Overall the film is a fun viewing experience. A lot of great acting and a really engaging story involving a lot of strange bird imagery. If you are looking for a film to tell you a great, dark story, then look no further. Aside from the hand-holding CG effects, this film is absolutely satisfying.