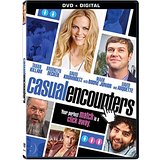 I laughed more than I expected to. That best summarizes my experience with Casual Encounters, a modern day depiction of what the dating world has essentially become these days. Trust me, I have witnessed it firsthand, and the days of positive connection are nearly gone. Tragic but true; however, there remains hope that people can find true love in some of the most low-tech ways, which is another good addition to the B movie.

Justin is devastated after a humiliating breakup with his longtime girlfriend. Stuck in a dead-end job at a call center, his life has not gone in the direction that he had hoped it would. As he begins to enter a spiral of despair, his buddy Sammy talks him into trying online dating using a dating site called Casual Encounters. Doubtful of the possibility of finding a match, Justin merely goes along until a surprisingly albeit successful night ends in a hookup.

Afterwards, Justin embraces the lifestyle of casual sex with no real attachments. At the same time, his relationship with his coworker Laura goes from workplace banter to flirtation and begins blossoming into something more. Can Justin give up the newly-embraced lifestyle for a chance at a relationship with his possible dream girl, or will he find out that there is no such thing as no-consequence sex?

As stated earlier, this is one of the most culturally relevant comedies that I’ve seen in a while. Think about it, what is the big thing nowadays…social media dating. Mobile apps such as Tinder or Plenty of Fish (Christian Mingle, if that is your thing) have made it possible for us to meet new and exciting people, whether it is merely for a hookup or a long-standing affair that concludes at the altar, by simply swiping left or right. New and exciting is the only way to sum up the dating pool that our main character finds himself in. Right out of the gate, the film does an excellent job capturing the fears that people have regarding blind dating (can you say Catfish). Hilarity ensues from that very first date that will have you in the audience asking what just happened as you clutch your stomach with laughter. The momentum doesn’t slow down with that first experience, either, as each encounter becomes more and more depraved (but in a funny way) until you find yourself questioning whether you should delete your own social media footprint. I know I did.

Another homerun is the cast, most notably our male lead, Taran Killam, who before this I only knew as a staple on Saturday Night Live. He makes some progress as he distances himself from  a typecast sketch comedian with his performance which is both equally socially awkward and unintentionally charming. Another good character is David Arquette playing Larry, a bleached blonde who delivers a couple nuggets of sage-like wisdom, if you can look beyond that terrible dye job. Brooklyn Decker tries to tone down her model perfection with a bubbly personality and no form-fitting clothing. Despite this I did find myself on more than one occasion remembering the scene from Just Go With It, where it emerged from the water. Last but not least is David Krumholtz as the slightly obnoxious best friend. It was fun to see Krumholtz as a mildly self-absorbed character, but even here that heart of gold managed to shine at times.

This film definitely goes down as one of the top comedies that I’ve seen in recent months. Definitely worth a watch, if you are looking for a laugh and have a bit of a strong constitution for good-humored depravity.

Jeremy Butler is a film school graduate of the International Academy of Design and Technology. He is been writing for Upcomingdiscs since 2012; however, movies have played a big part of his life for much longer. Favorite genres include horror, science fiction/fantasy, and comedy. Favorite movies are V for Vendetta, Boondocks Saints, Kiss Kiss Bang Bang, and The Godfather.
Tuesday Round Up: June 21, 2016 The Wave (Blu-ray)