Posted in: Disc Reviews by Brent Lorentson on June 22nd, 2016 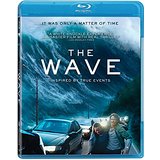 Disaster films are something that for me screams American cinema of the 90’s.  I know there were films before that had come out, but a good portion of my teen years of the 90’s were of the mega-blockbuster variety like Twister, Dante’s Peak, The Perfect Storm, and so forth.  Now we have The Wave, the first disaster film to come out of Norway, and from the looks of the trailers they were going for something BIG.  This is a film that comes out with so much potential and is a film that could even possibly find an American audience that could look past the fact that subtitles may be involved.  With the way technology has come along over the years, smaller countries have been able to produce films as big as anything released in our cinemas here in the states.  Now here’s the question: is it any good, though?

Welcome to the small mountain town of Geiranger, Norway.  It’s a quaint little town that attracts tourists with its isolation and beautiful landscape.  But having this little slice of vacation paradise comes at a price.  Geiranger sits in an area that has a lot of activity with the rocks moving beneath the surface, this movement geologists believe will one day cause a collapse of a mountain spilling into the fjord below which will create a massive Tsunami. Basically Geiranger is a town simply waiting to be wiped out by this massive wave.  This is where we meet Kristian (Kristoffer Joner), a geologist that has been studying Geiranger for years but is now moving away to the city for a “better job”.  It comes as no surprise that as he and his family are packing and ready to move that Kristian is troubled by recent recordings from around the area and has a feeling something bad is going to happen.  (One thing I’ve learned from disaster films, always listen to the nut job that believes the end is coming.)

What makes Kristian’s theory scary is if there is a major rockslide, the town will have approximately ten minutes to either flee the town or at least get 85 meters above the waterline, because that’s about high the oncoming Tsunami will be.

There is a good 45 minutes of character and plot buildup before the action kicks in.  What helps the film is that it keeps the focus around Kristian and his family, his wife Idun (ane Dahl Torp) and their kids Sondre (the son) and Julia (the daughter). The heavy drama comes when we know the inevitable disaster is going to occur and the family is separated; Kristian is with his daughter and Idun is working at the hotel while her son stays in a room.  I understand it’s a formula for these films that someone seems to always do something stupid that jeopardizes the safety of many people around them. In this case a character is simply so frustratingly aloof that I wish they were pushed into the oncoming wave.

As we get to see the oncoming wave and the destruction that follows in its wake, there are some pretty nice special effects on display.  But it’s nothing we haven’t seen before.  I feel kudos still need to be given to Norway on this film, because the execution of this sequence is pretty intense, but there have been so many American disaster films that have done this over and over to the point that a casual moviegoer would simply shrug at this sequence. Even with the family dynamic and wanting to see the family manage to reunite, it’s not enough to really separate this film from the numerous disaster films from before.

The Wave is presented in a 2.39:1 aspect ratio.  The 1080p image is arrived at with an AVC MPEG-4 codec at an average of 28 MBPS.  There is a lot of blue in this film. Usually this is a color we see for nighttime shots, but it seems a bit overpowering in the film.  We still get enough contrast and a decent amount of detail in the night shots, but the hue of blue was still a bit much.  In the hotel sequences things are a bit warmer, but everyone seems to have more natural hues.  Over all this is a good-looking film without artifacts or any compression issues.  Even the disaster sequence seemed to look OK, with a small amount of  halo around the characters in a hallway sequence, but it’s nothing too distracting.

The Dolby TrueHD Master Audio 5.1 track is pretty impressive despite having to use the English dubbing track.  The master track is in Norwegian, but you are given the options for subtitles and dubbing.  Going with the dubbed track, there are moments where you do seem to lose the emotional weight of the scene because the narration actors are pretty bad, but I have heard worse.  But the sound for the disaster sequence and everything following is well mixed and executed well.  There is a sequence with the characters banging on a pipe that delivers a good depth of sound.

Behind the Scenes of The Wave: (5:29) A brief behind the scenes look at the film with a limited mix of behind-the-scenes footage and discussion about the film.  Nothing really notable here.

The Wave Visual Breakdown: (9:29)  A three-part feature that shows how they layered in the digital effects of the destruction sequence.  This feature is a waste, to be honest. It’s broken up into three parts, and half of it is showing the same footage.

Interview with Director Roar Uthaug: (4:29) A very brief interview with the director about how important this film is to him and about the real-life implications of what could possibly happen.

If you don’t mind dubbing or are fine with watching the film with subtitles, this is a fun little popcorn film that does seem a bit too familiar at times.  What’s kind of cool is that the director of this film is going to be helming the new Tomb Raider series, and after seeing this, I feel he’s a confident choice in helming a tent-pole film for a studio.  But to sum it up, I like The Wave; it shows that it’s not some simple SyFy channel movie It does have a big budget put into it.  Sadly just not enough originality.

Brent Lorentson is a horror writer and film critic based out of Tampa, Florida. With a BA in Digital Film, he co-wrote and co-directed Scavenger Hunt. His short stories have appeared in various horror anthologies. In 2019 his short script Fertile Blood will be a part of the anthology horror film Slumber Party. He is currently working on his first novel A Dark and Secret Place set to be released in late 2019. Favorite Films: Taxi Driver, Fight Club, I Saw the Devil, The Wild Bunch, Dawn of the Dead, A Clockwork Orange, Pulp Fiction, Heathers, The Monster Squad, and High Fidelity.
Casual Encounters Star Trek (2009) (UHD Blu-ray) (4K)