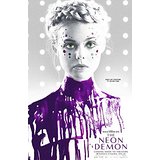 When it comes to director Nicolas Winding Refn, he’s a director I’m never all too sure what to expect from.  For me, Drive is one of my favorite films in the past ten years, while Only God Forgives simply bored me; despite the stunning imagery, it had nothing else going for it. His films going even further back are just as much of a mixed bag, so coming into The Neon Demon I knew better than to get my hopes up, and that I should just go ahead and let the film stand on its own, as it should. Even reading about its debut at Cannes, it was met with a mix of boos as well as applause, which was all I really needed to get interested in this film after seeing the visually impressive trailer.  At a glance it appears to be nothing more than the story of Black Swan (2010), only instead of following dancers, this is a film that thrusts the viewer into the world of modeling. Just where do I stand on this film? Well, it’s stuck with me since our screening days ago, and I’m still processing everything.

Jesse (Elle Fanning) has travelled out to Hollywood to pursue the dream that many others do on a daily basis, to leave their small town to try to become a star.  She doesn’t have a family, so she believes her looks are all she has going for her, so she may as well take a chance; after all, what all does she have to lose?  She’s not in Hollywood long before she has some photos made and she welcomed into a modeling firm; it would seem as though things could actually work out for Jesse.  Guiding Jesse along the way is a makeup artist, Ruby (Jena Malone) who sees something special in Jesse and wants to do what she can to help her along the way.  And it’s a good thing she has Ruby looking out for her, because it would seem that there are predators everywhere Jesse turns, and all of them seem to want Jesse.

It’s easy to see that the theme of the film revolves around how Hollywood seems to be the town that devours the beautiful and innocent.  The Neon Demon doesn’t just wish to show us this through visual metaphors but also in very graphic detail. The most obvious pair that wants Jesse out of town are models Gigi (Bella Heathcote) and Sarah (Abbey Lee).  The interactions between these girls range from humorous to downright cringe-worthy as they look upon Jesse as the girl who could easily snatch away their jobs; after all, a model’s shelf life in Hollywood is only a few years at best.  Not even the motel that Jesse calls home is safe, with unexpected visitors showing up in her room or prowling outside her door at night.  Keanu Reeves puts in a creepy performance as the manager of the motel where several odd and illegal things seem to be happening in all the rooms.

Jesse slowly comes to realize her beauty gives her power, and it’s with this knowledge we see her transition from the innocent wholesome girl we first met. Though everyone continues to fawn over her, it seems with this transition it made it harder to see the “it” factor everyone seemed to find in Jesse and was so jealous of.  Was it just her youth, or her simple innocence?  It’s frustrating, because it seems everyone in the film seems to be able to see this, but it never becomes clear to the audience just what makes her so special.

I should note that as the film played there seemed to be a surprising number of people trickling out of the theater.  The front half of this film leans heavily on very artistically crafted shots, an array of beautiful visuals that for some may seem to be going nowhere. If you were hoping for a broad, audience-friendly film, then you’d better turn around, because this is not that film.

This is a film that relishes the notion of making its audience feel uncomfortable; for instance there is a sequence where a photographer, played by Desmond Harrington, requests a closed set and asks the 16-year-old Jesse to strip down.  The tension built with this scene is incredible but very uncomfortable to watch.

For those of you wondering what makes this a horror film, is a creepy photographer really enough to label this a horror film?  It’s better to be left till you actually see the film, but for those wondering how long it takes for it to kick into horror film mode, I’d say about two-thirds in you start to slip into full horror film territory.

Refn seems to enjoy toying with his audience, only he doesn’t seem to care whether they are enjoying the experience or not.  As the film reaches its third act, I have to warn you this may be the point that doesn’t just nudge the audience over the edge, but full-on tackles them across the edge of decency. Seeing the people continue to trickle out shocked, yet impressed me, because I can’t think of the last time I’ve seen a film affect an audience to such an extent.  I find Refn to be courageous for doing this scene; in fact the entire final act is basically a middle finger to the traditional Hollywood film, and whether you like it or not is up to you to decide.

What anchors the film’s nightmarish visuals is the score by Cliff Martinez (Drive and Traffic).  How the music blends with many of the slow tracking shots in the film at times reminded me of A Clockwork Orange mashed up with Black Swan, but even that isn’t a fair comparison, because this really is a film that stands alone.  Some will pose questions about all the triangles, and others will simply be aghast and wonder why this film was ever made. Personally I feel this is a film that it going to have cult status, but that doesn’t necessarily mean it’s great, either.  While I did enjoy this film, every negative response I’ve heard about the film I do see their point on, and that’s what separates this film from the typical summer movie fodder.  Love it or hate it, The Neon Demon is the perfect example of why films get hit with the label Art House.  Art is all about perspective and how the viewer interprets the images before them.  I had hopes for Refn to be the next Michael Mann but instead he seems set in his way to be his own brand of cinematic visionary, and I look forward to see what he assaults us with next.

Brent Lorentson is a horror writer and film critic based out of Tampa, Florida. With a BA in Digital Film, he co-wrote and co-directed Scavenger Hunt. His short stories have appeared in various horror anthologies. In 2019 his short script Fertile Blood will be a part of the anthology horror film Slumber Party. He is currently working on his first novel A Dark and Secret Place set to be released in late 2019. Favorite Films: Taxi Driver, Fight Club, I Saw the Devil, The Wild Bunch, Dawn of the Dead, A Clockwork Orange, Pulp Fiction, Heathers, The Monster Squad, and High Fidelity.
Star Trek: The Original Series: The Complete Series (Blu-ray) Exclusive Interview With Ashley Park From All American Bikini Car Wash