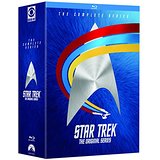 “Space…The Final Frontier. These are the voyages of the starship Enterprise. Its five-year mission: to explore strange new worlds, to seek out new life and new civilizations, to boldly go where no man has gone before!”

Paramount was bold indeed when they undertook the remaster project of the original series. Not only did they clean up the prints, but they took the decidedly risky option of redoing most of the f/x shots from the original prints. We all know just how cheesy the old work looked when compared to today’s computer abilities. You could see a box around spacecraft that allowed the obvious cutout to maneuver through a cardboard star field. There were often mix-ups where phaser shots would be used for photon torpedo commands and the opposite. The planets often utilized matte paintings that look somewhat ridiculous now. We forgave these flaws with a complete understanding of the limitations the crew had at the time. While Star Trek showed us computers that were remarkably similar to the PC’s we use today, down to the floppy drives of our own yesteryear, the use of computers to create f/x was still many years away. So Paramount decided to “fix” these “flaws” and make much of the show look like it might have had it been produced today. It was a serious risk because of the extreme possessiveness fans have for these kinds of shows. Just ask George Lucas how much fans like their sci-fi tinkered with. The project encompassed a few years, and the results are quite attractive. But how do they stand up for the fans?

I have heard very little complaint about these efforts. Most of the shots appear to be identical in scope to the originals, and with a few exceptions don’t appear to detract from the rest of the show. It helps that the restoration process itself has made even the original material look quite fresh, but more about that in the video portion of this review. I have to say I was about as skeptical as anyone when I first heard of this enormous undertaking. I knew that if they didn’t get the right people, there would be too much of a temptation to show off. I’m glad to report that every shot is respectful and not as overpowering as it could have been. There is a lot of respect paid to the source material, and the f/x appear to blend in almost seamlessly. You might even find yourself unsure if a shot is new or old, particularly planet-side additions. There was more than one occasion I had to dust off my old laserdisc collection and make some side-by-side comparisons. To me, those moments of uncertainty said more about the project than anything else. Imagine if we had gotten some George Lucas wannabe on this project. There would have been so much effort spent to dazzle us that the simplicity, and yet genius of these episodes would have been lost. I’m happy to report the results are something I think Roddenberry himself would have approved of. And now you can have your cake and eat it too with the toggle option I described earlier. So what’s not to love?

You can check out more from each season and a list of my favorite and least favorite episodes here:

Each episode of the series is presented in its original broadcast full-frame format. You do get yourself a full 1080p image here. I was disappointed to see that the codec was VC-1, which I find vastly inferior to AVC?MPEG-4. The bit rate seldom rises above 16 mbps. Certainly it’s better than anything we’ve seen, but is it the best we can see? I’m not sure.  Don’t let that keep you from buying this set. It might not be the best it can be, but it is VERY good. Anyway, the restoration is a pretty sweet piece of work. Colors jump out like they never have before. I noticed details that I’ve been missing for over 40 years. I’ve seen these episodes hundreds of times, and I couldn’t help feeling like I was actually seeing them for the first time. Reds were particularly blazing for the first time ever. The new f/x shots blended in perfectly and exhibited an appropriate picture quality. The f/x were clear and clean, but yet made to look like the original film stock. Gone are some of the print flaws from earlier releases. The transfers are very clean. If for no other reason, you need to see Star Trek in a form that was never possible before even in first run broadcast. These episodes leap at you at warp speed.

The DTS-HD 7.1 Master Audio track is an awesome upgrade here. Again the key is that it does not impose itself as a distraction. The surround mix is negligible enough to fit in with what we remember while adding more on the dynamic side rather than any kind of aggressive mix. When the ship appears for the menu screen, you’ll hear sub response that I just never connected with the original show. The dialog has been obviously enhanced by the new mix with good results. The iconic incidental music is better than ever before. You get everything you’re used to, but better, in this audio presentation.

All of the features from the individual sets are here.

Just in time for the third new Trek film we get all 79 episodes plus the original pilot in one huge collection of Star Trek on Blu-ray. It makes a great gift or just a nudge for those fans who haven’t made the plunge yet. It’s a must-own. “To deny the facts would be illogical.”

Gino Sassani is a member of the Southeastern Film Critic's Association (SEFCA). He is a film and television critic based in Tampa, Florida. He's also the Senior Editor here at Upcomingdiscs. Gino started reviewing films in the early 1990's as a segment of his local television show Focus. He's an award-winning recording artist for Omega Records. Gino is currently working on his 8th album Merchants & Mercenaries. Gino took over Upcomingdiscs Dec 1, 2008. He works out of a home theater he calls The Reel World. Favorite films: The Godfather, The Godfather Part II, The Body Snatcher (Val Lewton film with Karloff and Lugosi, not the pod people film), Unforgiven, Gladiator, The Lion King, Jaws, Son Of Frankenstein, The Good, The Bad And The Ugly, and Monsters, Inc.
X-Files: The Event Series (Blu-ray) The Neon Demon