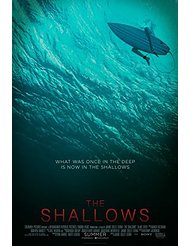 You’d have to go all the way back to 1975 when Jaws was released that a film has come out that has given us a reason to be afraid to go into the water. There have been several attempts to capture the magic that we saw in Stephen Spielberg’s classic film about a large great white shark that preyed upon the swimmers in the town of Amity.  Now that summer is upon us and the heat has us flocking to our A/C units or to the beaches, it couldn’t be a better time to unleash another killer shark film upon the masses.  I have to admit when the trailers came out for this, all I expected from it was to be a campy film that just happened to be well shot.  Instead director Jaume Collet-Serra (Run All Night & Orphan) delivers an enjoyable thriller.

Nancy (Blake Lively) is a med-student who has just about finished all her schooling but is struggling with the death of her mother from cancer.  She leaves her home and school in Texas to take a trip to Mexico to find a secluded beach her mother used to speak so fondly of.  It doesn’t take much to make a connection with Nancy and respect her choice to come to terms with the loss of her mom.  Her father, played by Brett Cullen, wants her to come back home and finish school, but Nancy is conflicted with her faith in medicine, so who can blame her for wanting to grab her bikini and do some surfing to battle her grief?

The film wastes no time as Nancy is first attacked by a great white shark while she investigates a whale carcass that is floating in the bay she is surfing in. With the blood in the water from both the whale and Nancy, anyone who has seen Jaws or watched Shark Week knows this is only going to send the shark into a frenzy.  Looking for a safer spot to get away from the shark, Nancy swims out to a small collection of rocks where she takes cover and attempts to mend her wounds while hoping for the miracle of a beachgoer spotting her.

While the shark circles Nancy upon her nest of rocks, time is ticking till the high tide rolls in and she loses the security that she has. Perched on the rocks with her is an injured seagull that somewhat works as someone for her to speak and vent to.  Usually it’s this bit of storytelling that is the most dangerous, because very rarely does it ever come off on screen.  The bird is simply a device for us to know what Nancy is thinking, but also shows us more about whom she really is and the nurse/doctor she could be. Surprisingly this relationship works and only leaves us rooting for Nancy even more as the two wait pathetically for the tide to roll in.

The degree of physical punishment we see Nancy withstand does seem to be a bit much. A shark bite is one thing, but once you go down the list of injuries Nancy manages to have inflicted upon her, you have to wonder can she even survive swimming to safety, much less having to outswim a shark hell-bent on making her a meal.  She encounters coral, jellyfish, exposure, and that’s only a brief rundown of what Nancy is up against.

Just about every second of this film is dependent upon Blake Lively and her performance, and considering this is a story that treads on all too familiar ground, there was a high probability for this film to fail.   Instead this film manages to engage the audience with some beautiful cinematography and a plot that keeps our heroine in constant peril.   I’m not saying the film’s great, but it is definitely a film that shines brighter than I would have expected.  The CGI shark has moments where it is a menacing force to be faced with, and at times the film does get a bit absurd with its reluctance to just settle on eating the dead whale.

I went in thinking this would just be a film that would depend on the visuals of Blake Lively in a bikini and a shark ripping through swimmers but instead got something better, something with (forgive the pun) a little more bite.  This is a summer movie just about everyone can enjoy and clocks in just under 90 minutes.  It doesn’t match up with Jaws by any stretch of the imagination, but this is finally a shark film that doesn’t feel like it’s talking down to its audience. Personally I hated the ending, to the point it lost all the momentum it had going for it, but I understand there will be plenty of people in their seats that will be satisfied with this.  The nicest aspect of this film is seeing a character that young women in the audience can relate to as well as a strong female character young girls can root for.  This has potential to be the sleeper hit of the summer and is a good reason to take a break from the sun and escape from the heat and the real world for 90 minutes.  The Shallows may not be perfect, but it’s popcorn fun with plenty of character depth and bloody mayhem to keep you entertained.

Brent Lorentson is a horror writer and film critic based out of Tampa, Florida. With a BA in Digital Film, he co-wrote and co-directed Scavenger Hunt. His short stories have appeared in various horror anthologies. In 2019 his short script Fertile Blood will be a part of the anthology horror film Slumber Party. He is currently working on his first novel A Dark and Secret Place set to be released in late 2019. Favorite Films: Taxi Driver, Fight Club, I Saw the Devil, The Wild Bunch, Dawn of the Dead, A Clockwork Orange, Pulp Fiction, Heathers, The Monster Squad, and High Fidelity.
Exclusive Interview With Ashley Park From All American Bikini Car Wash The Funhouse Massacre