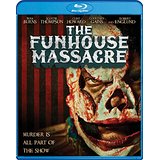 It is with a rather heavy heart that I give this film a low rating, because it really has so much going for it. The concept of having several psychopaths escape from an asylum, only to slaughter the patrons of a horror-themed amusement park has a lot of potential when you think about it. During the times when horror attractions such as Halloween Horror Nights have become so popular, it’s hard to believe that a film like this hasn’t already been made. (Perhaps one has, but I have not heard of one yet.) Regardless, the film is pitched as a horror comedy, which is a genre that can easily lose control of itself. Predictably, I would have been much more satisfied without the comedic elements put into the film.

The plot of the film is introduced by Robert Englund, who plays a warden of an asylum that harbors five dangerous psychopaths, including Mental Manny (Jere Burns) and the Taxidermist (Clint Howard). The criminals escape and find their way to a horror-themed carnival on opening night, and they begin killing people. A group of teenagers/young adults leave work to attend this attraction, but realize that things are not as they seem. As always, it is up to the virgin to save the bullies (her friends) and herself from the impending slaughter.

Aside from the bait-and-switch by listing Robert Englund prominently on the cover (Englund does not appear outside of the prologue), the casting and the characters are this film’s strongest suit. Burns plays the role of Mental Manny, a charismatic cult leader, very well; Howard is an excellent, creepy Taxidermist, and there is even a nod to the oft-forgotten The Dentist, though I think it would have been a pretty awesome pull to get Corbin Bernsen to reprise that role for this film. Outside of those characters, you have the ex-pro wrestler turned clown killer, and Dollface, the semi-silent daughter of Mental Manny. Each killer has their own quirks that are very fun to watch, except for the cannibalistic chef, whose purpose is to contribute to the comedic elements of the film, which is its biggest problem.

Horror comedies are very hard to pull off properly, because more often than not, there is just way too much forced comedy. I like horror films with comedic elements, and I like comedy films with horrific elements. However, when you have a horror film that you put too much focus into the comedy, the result is always the same: the film feels like a terrible comedy with blood and gore. I didn’t laugh at a single joke in the film, not only because I didn’t find them funny, but they were rather distracting from the well-composed, horrific atmosphere that was already established. If you stripped this film of comedy, it would be a legitimately scary film with one of the most insane body counts I have ever seen. My feelings might be symptomatic of having watched way too many horror films, but I feel like watching a group of young people be slaughtered never used to be as empty as it is in this film. I’m not saying the horror films of old were not as bad when it comes to flimsy plots, but I do recall caring a lot more about Laurie Strode’s fate in Halloween than the girl who dressed like a bumble bee in The Funhouse Massacre. Laurie Strode was genuine and organic, whereas bumble bee girl just told way too many flat jokes.

Overall, the atmosphere and the killers just worked so well in this film. I liked it all, and I thought it was a great idea. With the addition of excellent camera work, decent special effects, and pretty great scares, this film has so much going for it. You can absolutely tell that making a horror film was this team’s top priority. I just can’t help but wonder why they insisted on so many one-liners in the dialog, or just silly comedic scenarios with the characters who will most likely end up dying (it is a horror film after all). The bottom line is, if you like cheesy humor in your horror film, then you will be treated to excellently produced, horrific imagery. If you really like horror films the way I do, you will be rather annoyed at the number of intentional silly moments that are trying too hard to score a laugh.