How to Get Away with Murder: Season 2 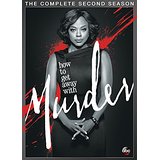 “What does sex have to do with criminal law?”

Shonda Rhimes pretty much has an answer for that. It doesn’t matter if it’s a hospital or a law firm, Rhimes knows how to interject the musical-beds routine about as well as anyone can. Of course, it’s really Peter Nowalk who is the creator and showrunner for How To Get Away With Murder, but while Nowalk might be driving the bus, Rhimes’ touch can be found in every corner of the sophomore ABC series. It’s a formula that appears to work for both Rhimes and the ABC network which finds her first hit, Grey’s Anatomy, just finishing its 11th season. I guess you can’t argue with success. Let’s see if I can argue with How To Get Away With Murder Season 2.

Viola Davis stars as Annalise Keating. Keating is a lawyer who also does double duty teaching criminal law at a local Philadelphia university. She calls her class How To Get Away With Murder, but what it really should be called is How To Cash In On Law Students. Her lessons amount to her asking crucial legal questions that coincidentally coincide with whatever current case she happens to be working on at the moment. She puts the question to the students and challenges them to come up with the best solution, which she will conveniently use in the case. Annalise is also not a very likable human being. Not only is she using her law students, but she wouldn’t know the truth if it were wearing a name tag and sitting next to her on the bus. You know you’re in trouble when Annalise starts a conversation with something like “I’m tired of lying” or “You deserve to know the truth”. That’s when she’ll serve out more whoppers than Burger King on a Friday night. She’s manipulative to the point of murder. Unfortunately, it’s hard to feel bad for the people she manipulates and lies to, because they’re all just as unlikable.

Keating has two associates who have worked for her long-term. Both have been manipulated into a really sick kind of co-dependence upon her. Charlie Weber is Frank Delfino. He’s the guy she goes to to plant evidence or make someone disappear before they’re supposed to testify for the other side. He acts out by sleeping with the students. There’s also Lisa Weil as Bonnie Winterbottom. Bonnie’s been messed up since her dad sexually abused her as a child. Annalise takes full advantage of her timid and easily controllable nature. She’s outright cruel to the woman, all the while taunting that everything she does is to help her “family” In the first season she was married but was sleeping with police officer Nate Lahey (Brown), all the while digging at her husband for having an affair. Nate doesn’t get off too easy; she frames him for murder, then justifies it by trying to help his case. Her kind of help Nate doesn’t need. Each class Annalise picks four students to join the firm and, I hope, actually get paid. Season 1 she picked five, and they’ve all been up to their belly buttons in murder ever since.

The students are collectively known as The Keating Five. If it sounds like a bad rock group or a police lineup, it fits. All are pretty flawed, and all end up involved in murder or cover-up by the time we get to season 2. You have Wes Gibbins (Enoch), who sleeps with a witness/murder suspect who ends up dead by the time season 1 ends. This is all after he murders Annalise’s husband for said suspect. Of course, he doesn’t know that as the season unfolds. Annalise has an older connection with him that gets revealed as this season progresses. Laurel Castillo (Souza) is a troubled rich girl who falls for Frank, that is until she found out that he killed someone. She’ll do a turn with a couple of the characters by the time season two ends. All of this murder and jeopardy shouldn’t get in the way of a young girl’s sex life, right? Same applies to overachiever Michaela Pratt (King). She hoped to marry into a rich family until she found out he was gay, or at least bi. So it’s “let’s test each bed to find out which one is juuuuust right”. Conner Walsh (Falahee) is the resident gay character who often uses sex to get other guys to talk. He’s the one jumping from guy to guy, but it’s his partner Oliver (Ricamora) who ends up paying the price. Finally, there is Asher Millstone (McGorry) who is the son of a corrupt judge with a nasty event hiding in his own past. He overcompensates for his issues with bravado and silly catch phrases. He’s limited to sleeping with Bonnie… or is he? The funny thing is that up until this season while he was absolutely annoying, he was the innocent likable guy. Don’t expect that to last beyond season 2.

The second season is more of a disappointment than the first. There aren’t any real court cases going on as there were in the first. That means less time as a courtroom drama and less time in the classroom. There’s really just one big case that involves two adopted siblings accused of killing their parents. It all leads to yet another dead body and the team working to cover it all up. Just as in the first season, the climax is revealed a little bit over each episode as a flash-forward. Between these overused scenes and the contemplative flashbacks the show must save a serious amount of production cost by reusing the same footage many times over. Saves them money, but gets tedious for us. To make matters worse, the flash-forwards use a terrible element of CG blood that looks absolutely horrible. You’d think with the saved production costs they could have put more into the big climax. You would have thought wrong.

This season is really split into two parts. After the big reveal we end up with six more episodes dealing with the aftermath and a ton of flashbacks that connect Annalise and Wes.

The saving grace of the second season can be found in two very extraordinary recurring roles. Famke Janssen recurs as an old college associate who helps get Nate out of the jam Annalise put him into. It turns out they share the connection with Nate. The brightest moments of the season have to be reserved for Cicely Tyson, who plays Annalise’s mother. What can I say about this phenomenal actress? She’s over 90 years old, and she has such strong presence that she steals every moment she’s on screen. There’s something magical and delightful about the actress that comes across here in scores. Unfortunately, the material around her could never measure up. It was an oasis in the desert for me.

You get 15 episodes on four discs. The only extras are deleted scenes and bloopers. The video quality is high for a DVD, and thankfully ABC only put four episodes per disc. I wish more studios would follow their lead. While I might not really be much of a fan of the show, it’s obvious ABC attempts to give them what quality they can. “Now go home and don’t kill anyone.”

Gino Sassani is a member of the Southeastern Film Critic's Association (SEFCA). He is a film and television critic based in Tampa, Florida. He's also the Senior Editor here at Upcomingdiscs. Gino started reviewing films in the early 1990's as a segment of his local television show Focus. He's an award-winning recording artist for Omega Records. Gino is currently working on his 8th album Merchants & Mercenaries. Gino took over Upcomingdiscs Dec 1, 2008. He works out of a home theater he calls The Reel World. Favorite films: The Godfather, The Godfather Part II, The Body Snatcher (Val Lewton film with Karloff and Lugosi, not the pod people film), Unforgiven, Gladiator, The Lion King, Jaws, Son Of Frankenstein, The Good, The Bad And The Ugly, and Monsters, Inc.
All American Bikini Car Wash The Other Side Of The Door (Blu-ray)