The Other Side Of The Door (Blu-ray)

Posted in: Disc Reviews by Brent Lorentson on July 5th, 2016 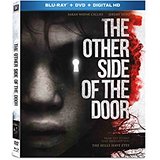 We’ve all heard and seen the story before; a family loses a loved one and consumed with grief they meddle with unknown forces to see their loved ones again.  The Monkey’s Paw is one of my favorite stories that cover the topic. I’m sure everyone at some point had to read this short story in school.  Having read the story and seen the numerous films that have covered the topic, you’d think by now people would have learned to not mess with forces they don’t understand.  The Other Side of the Door is the new paranormal horror film to cover the subject, and it seems people still just haven’t learned. Is the film worth taking a look to see what lies beyond the door, or is this one better left alone?

After taking a trip to India, Maria (Sarah Wayne Callies) and Michael (Jeremy Sisto) love the country so much that they decide to move and raise a family there.  The family seems to be doing well; they eventually have a son, Oliver (Logan Creran) and a daughter Lucy (Sofia Rosinsky).  Everything seems to be great till there is a tragic car accident where Maria is faced with losing Oliver after being unable to free him from the car as it becomes submerged in a river.  Of course grief and guilt overwhelm her, and with good intentions a maid at their home refers Maria to a temple where she can perform a ritual and say a proper goodbye to her son.  Only there is a rule: don’t open the door no matter what you hear.  Well, we wouldn’t have much of a movie if she’d followed the rules. Besides, in these films the characters do nothing but make terrible decisions while we look on from the comfort of our seat shaking our heads about their foolish choices.

It’s not long before creepy things begin to occur in the family home, as it seems Oliver has come home and is content with simply getting back to being who he was before he died.  But he’s a demanding little spirit, wanting his mom to read him stories and constantly wanting to have her complete attention.  For some reason Maria decides it’s best to not let her husband know her son is back from the dead and causing mischief.  Then there are the Aghori, these primitive-looking figures that look menacing and are the guardians to the door between the world of life and death.  It’s their job to be creepy, and they play the part well, but it doesn’t take much to figure out that they are really the good guys here.  If only there was a translator, so much confusion could have been avoided here.  But they also have a nasty habit of just popping up out of nowhere. These guys need a bell to alert people they are approaching, at least if they want to prevent people from screaming and running every time they appear.

Joking aside, I can’t help but feel this stuff was silly, because we’ve seen this all before.  I love that the story takes us to a new location we haven’t seen before in this genre, at least in American cinemas. The sequence with Maria at the temple to speak to her son is really the only moment in the film where I felt we were seeing anything unique being brought to the genre.  I wish so much more was done with the culture and their beliefs to try to give us something new, but instead the moment Oliver gets to the home we get the standard haunted-house tropes we’ve seen enough of as it is.

Callies manages to deliver a well balanced performance you can empathize with, considering in The Walking Dead she played a role that simply had me hating the character.  It was nice getting to see her play a range of emotions here and be someone we can root for.  As for the rest of the cast, they do what they can, but the roles simply don’t do much to be memorable.  Now the family dog, ugh, this poor fella did all it could to warn and protect the family, but no one bothered to listen to it.

The film has some nice cinematography and some jump scares, but it’s nothing we haven’t seen before.  When you have films like Insidious and The Conjuring, filmmakers need to step up their game if they want to compete.  Depending on a loud music cue to startle your audience isn’t great filmmaking, but instead a cheap scare, and that’s really all we got here. It could have been something more if they dared to give us a story we haven’t seen before.

The Other Side of the Door is presented in the aspect ratio 2.39:1.  The 1080p image is arrived at with an AVC MPEG-4 codec at an average of 30 mbps.  I really enjoyed the look of this film.  There were a lot of shades of browns and greens that seemed appropriate for the setting.  The design of the house is rich with these muted colors and is filled with textures that come through in this presentation.  At the temple we get more shadow definition and the look of the Aghori is very sharp, and we get enough detail to see the ash and paint along with all the cracks in it.  The skin tones are all natural, and there are no artifacts or compression issues.  This is a nice-looking film.

The DTS-HD Master Audio 5.1 track is just about the standard for what you’d expect from these paranormal films, plenty of loud noises that rattle the bass to get you to jump when there is nothing to scream about.  The music cues and dialog all come through clearly.  Just about the moment I felt sound really made an impact there was a scene with the ghost of Oliver playing on the piano, very creepy moment.  There’s moments where we hear the pitter-patter of feet from the side speakers and the surround is utilized; I just expected a little more from this.

Deleted Scenes: (7:41) A small collection of scenes removed from the film, nothing really great to be found here.

Behind The Door: (1:55) A trailer for the film with snippets of an interview where producer Alexandre Aja explains the influences of the film.

Gallery: A series of photos from the making of the film.

While the film is far from perfect and it does seem to use many of the same clichés we’ve seen before, the new location and the introduction to the Indian mythology with speaking to the dead was a welcome addition to the story.  While there are better horror films out there, this is still a fun choice for a late night in with all the lights turned out.

Brent Lorentson is a horror writer and film critic based out of Tampa, Florida. With a BA in Digital Film, he co-wrote and co-directed Scavenger Hunt. His short stories have appeared in various horror anthologies. In 2019 his short script Fertile Blood will be a part of the anthology horror film Slumber Party. He is currently working on his first novel A Dark and Secret Place set to be released in late 2019. Favorite Films: Taxi Driver, Fight Club, I Saw the Devil, The Wild Bunch, Dawn of the Dead, A Clockwork Orange, Pulp Fiction, Heathers, The Monster Squad, and High Fidelity.
How to Get Away with Murder: Season 2 Tuesday Round Up: July 5, 2016