Posted in: No Huddle by Archive Authors on July 9th, 2016 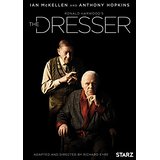 In 1983, The Dresser was nominated for five Oscars for Best Actor for Tom Courtney and Albert Finney as well as Best Adapted Screenplay, Best Director, and Best Picture. In 1980, it was also nominated for Best Play in both Britain’s West End and on Broadway in New York. It is a showpiece for the best actors in the world. It revolves around two characters: a great Shakespearean actor who is struggling with the fear of oncoming mortality and his close personal servant who tries to hold his master together. It is a brilliant vehicle for any great actor. Since it first came to prominence, there have been talks about a new attempt to reinterpret the material. It has now been done for the Starz and BBC channels and is out on video. And as brilliant as the first two actors were, I was surprise how much richer this new version has made the material seem.

Sir Anthony Hopkins is Sir. Sir Ian McKellan is Norman. The person who especially impressed me was Hopkins. He has spent a number of years coasting in various roles, but in this case all sorts of reserves of shading and character emerge. He is absolutely stunning, in maybe one of the best performances of his life. That being said, McKellan shines as well in a part that is much showier in many respects.

Norman is trying to make sure a performance of King Lear goes on. Everyone else is doubtful. Sir is in the hospital after having a mental breakdown wandering the streets. Norman is the one person who cajoles and charms Sir before every performance. He has been his dresser for countless years. Her Ladyship (Emily Watson), his wife and co-star, is pretty sure he won’t go on. Madge (Sarah Lancashire) is the stage manager and is also certain the performance must be canceled. Both these woman know more things than we know at first and will each have major scenes later on. Thornton (Edward Fox) plays the Fool but also has a wonderfully touching scene later on. Fox, by the way, is part of a  famous trio of acting brothers and is well known in parts of playing the stiffest of stiff-upper-lip Brits. Fox also appeared in the original film in a different role as the impertinent younger actor Oxenby, who has no patience for the over-the-hill and arrogant Sir.

But the true pleasure and excitement is to see Sir appear. He starts appearing as a naughty boy but collapses into confused vagrant. At times Sir is imperious and stern and other times full of bluster. He tries to hide his confusion and dementia at times, but never from Norman. Norman is always there to prop up his master. Norman is always full of brio and confidence except when he has a brief moment to hide and can knock down a slug of whisky from his pocket.

I did like the original film very much, but both actors, in this case, realized that this was one of the great acting opportunities of their lives. They rose to the occasion and showed why they are both knighted by the Queen. They showed themselves to be masters of the realm of acting.