Posted in: Disc Reviews by Gino Sassani on July 9th, 2016 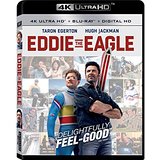 When I was a kid in the 1970’s there was a weekend sports show on ABC called The Wide World Of Sports. It was a catch-all for those sports that don’t have the kind of national branding of football or baseball. It was the kind of show for boxing, gymnastics, or skiing. I don’t remember a single episode that I saw. What I do remember along with anyone who has ever watched it is the opening sequence. We were promised the thrill of victory… and the agony of defeat. With that last line we saw the image of a ski jumper taking a horrible wreck as he comes off the jump. In the 40 years since I still often wonder about the guy whose legacy will always be the very definition of unmitigated failure, and painful failure at that. Who in their right mind would want to be a ski jumper, I would think. Who would want to be that guy? Apparently, his name was Eddie “The Eagle” Edwards, and now he has himself a “true story” film, and it’s out in 4K. Of all the things I could have been thinking as I approached this film, I’m afraid to say it was: “Is Eddie “that guy”? Will I see it in 4K? Eddie isn’t “that guy”, and unfortunately, Eddie The Eagle isn’t even close to being “that movie”.

Kingsman: The Secret Service star Taron Egerton plays Eddie Edwards. Ever since he was a young child, he dreamed of being an Olympic athlete. During the games he would stage “runaway from home’s” to get to the games wherever they might be. He was a sickly child with leg issues that kept him in the hospital for a year. Still the dream lived on. It didn’t matter what event, he just wanted to get there. So he takes up skiing and amasses a few ribbons and trophies but falls short of his Olympic dream when the British selection committee doesn’t find he represents the right “class” of competitor. He finds a loophole in the fact that Britain hasn’t had a ski-jump entry in over 40 years. Britain isn’t exactly the best place to polish your ski skills. If you’re thinking Jamaican bobsled here, you’re not far off the mark.

Eddie journeys to Germany to learn the sport. A few bruises later he takes up with disgraced champion Bronson Perry. Perry was once the great American hope, but he was too full of himself and took to the bottle. It disappointed his coach and mentor Warren Sharp, played in an extended cameo by Christopher Walken. He eventually, though reluctantly, agrees to teach Eddie the jump skills he needs to at least get him one good jump. Apparently that’s all he needs to get in. Of course we get the requisite training montage. Remember paint the fence? Here it’s Up. Back. Forward. Down. Eddie makes his jump only to have the selection committee move the bar after the fact. You know what’s going to happen, right?

The movie isn’t really about skiing at all, as it turns out. The sooner you jump to that point, the better the movie will play out. It’s not just your typical underdog film, either. We actually have two souls that need redemption here, and I’m not sure the redemption of Perry, played by Hugh Jackman, isn’t the compelling story here. Of course the focus is on Eddie, and Egerton shows us quite a range here. Eddie isn’t anything like his Kingsman role, and he’s quite honestly almost unrecognizable in both look and performance. There’s the saving grace of the entire film. It’s the performances of the two leads and the pretty solid offbeat chemistry that develops rather naturally between them. I found that relationship far more compelling than Eddie’s Olympic story. Without that you just have a cheap imitation of Rocky, and you’re not going to beat Rocky for that particular story. The film struggles in its pacing, which makes Eddie’s progress a bit beyond belief. Director Dexter Fletcher spends too much time on the trivial things and doesn’t take advantage of the heart his two leads are handing him on a silver platter. This could have been an outstanding film. Instead it ends as just another underdog-makes-good, and Eddie ends up not as likable as he should/could be.

The supporting cast includes more solid performances. Keith Allen is pretty good as the father who wants him to follow in his footsteps as a plaster man, while Jo Hartley plays the proud Mum who pushes him to follow his dream. There’s another nice dynamic here that Fletcher again misses the chance to take good advantage of. Iris Berben plays an important part in Eddie’s life when he makes his way to Germany, but Fletcher uses her for a scene of sexual discomfort for Eddie and pretty much throws her away for the rest of the film. Fletcher wanted to focus entirely on Eddie and obviously considers everyone else window dressing. In spite of that attitude, there are good performances and relationships that cried out to be great.

Eddie The Eagle is presented in an aspect ratio of 2.35:1. The Ultra high-definition  image is arrived at by an HEVC codec. This isn’t a movie that cries out to be seen in 4K. When I compared the two image presentations, I found the only differences were found in the pop of the Olympic uniforms where color has a rare chance to really come through on this film. The other was that the snow was not nearly so harsh in 4K. This is the second time I noticed that the improved resolution and color reproduction manages to help not so much in the black levels, but in the white. The detail and texture goes a long way to reduce washed-out glare of the plentiful snow here. There are a few scenes with wonderful mountain views that look quite extraordinary. Often long shots lose this detail. Close-ups are where the dynamic difference can be found.

The Dolby Atmos 7.1 audio is not really the kind of presentation that lends itself to aggressive surrounds. The mix here is subtle, to be sure. During the jumps there’s the slight bit of complementary sounds coming from the surrounds, but it’s only the score that punches through with any frequency. It’s safe to say that the audio supports the image without calling any extra attention to itself. That might not be the kind of thing you want to use to impress your friends with your system. It is sometimes exactly what’s required in a situation like this. Dialog is always up front and clean.

The only extras are found on the Blu-ray copy, which is the same as the original Blu-ray release.

I found this to be an odd choice for 4K at first. I soon realized that if this new format is going to work, it has to offer something for every kind of film, from romantic comedies to talking heads. It can’t just be the explosive sound and images of a superhero, sci-fi, or action film. These kinds of films need to have something to offer. And while it may not be as eye-popping and dramatic as some films will be, there’s a place for it all in the world of 4K. It’s a new world of home entertainment. “Let the games begin.”

Gino Sassani is a member of the Southeastern Film Critic's Association (SEFCA). He is a film and television critic based in Tampa, Florida. He's also the Senior Editor here at Upcomingdiscs. Gino started reviewing films in the early 1990's as a segment of his local television show Focus. He's an award-winning recording artist for Omega Records. Gino is currently working on his 8th album Merchants & Mercenaries. Gino took over Upcomingdiscs Dec 1, 2008. He works out of a home theater he calls The Reel World. Favorite films: The Godfather, The Godfather Part II, The Body Snatcher (Val Lewton film with Karloff and Lugosi, not the pod people film), Unforgiven, Gladiator, The Lion King, Jaws, Son Of Frankenstein, The Good, The Bad And The Ugly, and Monsters, Inc.
The Dresser The Secret Life of Pets