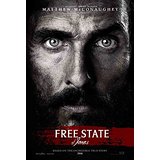 I am somewhat angry right now. I am increasingly stunned at what is being praised in this culture. We are trapped in an era that is supposed to be enlightened but is ladled on top with layers of rotting organic material (which is a euphemism for a rather rude word). There seem to be no interest in certain things that are very important and increasingly relevant to us. There are subtleties and complexities about ourselves that we don’t understand and that is why the world is still enmeshed in violence and madness. I am talking about people who should know better. People who pontificate and tell us what we are supposed to think. Critics. Pundits. Prognosticators. I am one and I try to stand apart and formulate my own thoughts but it is difficult when you feel alone sometimes. The Free State of Jones has been called boring. It is not. It is one of the best historical films I have seen for a while. It is the best film of the year so far. 12 Years a Slave was a magnificent film and I would say The Free State of Jones is better. All sorts of modern entertainment is paraded before us, and it is all somewhat repetitive and pointless. It is mindless entertainment. I will try not to get too specific because I don’t really object to mindless entertainment. What I do object to is that when all this mindless, jaded and scattered opinion then turns its back on anything academic and well researched. Many historical films are somewhat staid and a little boring. The Free State of Jones is not one of those films. It is a war film and a film of constant conflict and battle that takes many forms. It is complex and unexpected in its story telling. It is brilliantly acted by everyone from the smallest part to the man who plays Newton Knight (Matthew McConaughy).

Knight is the central character of the film. His story is true and part of forgotten history. Forgotten history is all that history that they deliberately don’t tell us. It is an amazing, vital and important story. Knight was a fearsome fighter and a man of unbreakable will and keen intellect. He was also a poor farmer in Mississippi during the Civil War. His journey was to organize a rebellion against the confederacy. Years before Communism he created a pocket in the South that existed to band all the poor and disenfranchised together to share in a common goal. The story takes remarkable turns and I was honestly surprised how much depth, complexity and relevance was brought to the story. I will not even try to summarize it. If you like history, I cannot recommend the film highly enough. If history bores you, then you are likely a boring person. True history is full of guideposts to learn from. Our world is in turmoil because too many leaders have not learned the lessons of history.

The Free State of Jones makes one thing clear. Skin color has never been important. It is the divisions between the rich and poor that matter. That seems like an obvious message but it has always been clouded by subterfuge. I never give more than 4 and ½ stars and The Free State of Jones gets it, partly to as a slap in the face of idiots who don’t see its brilliance. Kudos to everyone involved with special mention to director Gary Ross (The Hunger Games, Seabiscuit, Pleasantville).

The Secret Life of Pets The Levenger Tapes