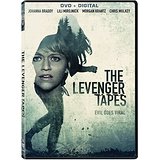 Those sound like famous last words if I ever heard them. The Levenger Tapes is without a doubt one of the more intriguing thriller films that I have seen this season, featuring not only a found-footage technique but a subplot involving the authorities investigating a kidnapping case simultaneously. The thing that ties it all the together, the discovered footage, is the only tangible link to solving the other crime.

Detectives Rooney and Finch (John Rosenfeld and Camden Singer respectively) are brought in late at night to investigate a crime which recently transpired: a young university student was found in a hysterical state in the woods. Semi-catatonic, the student is not revealing what took place in the woods, but the discovery of two additional murdered students has the detectives grasping for answers. Unaware whether their detainee is the culprit or just a traumatized survivor of the events, the only means to discover the truth the police have is a recovered video camera which has the potential to solve another mystery.

The footage tells the story of Amanda (Joanna Brady), Kim (Lili Mirojnick), and Chase (Morgan Krantz), three college students on spring break on their way to Chase’s family cottage for relaxation and fun. During a pit stop for alcohol, Chase steals a bottle, forcing the group to make a run for it, hitting another car before making their getaway.  Through that accident, the authorities receive their first clue in an unrelated kidnapping that occurred days earlier.

Determining it to be the only way to solve both crimes, the police continue to watch the recordings. It becomes immediately clear that both crimes are not what they seem, and sinister forces are at work in the seemingly unconnected crimes.

A decent thriller, though it does lose some steam towards the ending, but we’ll get to that. I really thought the way the two mysteries were tied to together was very unique and relatable. Very clever, using the found-footage technique (which based on my previous reviews, you know that I am not fond of) as a means of keeping both events occurring simultaneously in the minds of the viewer. The setup ran a bit on the long side and could have been cut down and refocused on the procedural side, which was somewhat lacking, or been utilized to go deeper into the kidnapping subplot. That said, as it stands, I do believe a “job well done” is still owed to the creators as well as cast. The story stays on point, moving forward to the conclusion. The intercutting of the police observing the tapes provides the necessary continuity to ensure the audience keeps focus to the overall purpose, what happened to Katie Levenger? When it comes to our three college kids, the credit belongs more on the side of the cast, as their story does appear to waver from time to time. Joanna Brady remains the voice of reason for the group as she pushes the other two to do the right thing. Furthermore, the three really fit their roles. Chase is more of the bad influence, but he does have a few (I stress a few) redeeming attributes, and Kim’s deadpan demeanor does provide a few possibly inappropriate chuckles. I can’t help it, that’s just how my sense of humor operates.

There is a bit of a supernatural vibe to the film, and there are a few aspects that were underdeveloped, such as the entity that appears to be stalking our campers. All and all, I would call the thriller a successful and a worthwhile experience that I encourage others to participate in. You aren’t likely to be frightened, but you will be intrigued.

Jeremy Butler is a film school graduate of the International Academy of Design and Technology. He is been writing for Upcomingdiscs since 2012; however, movies have played a big part of his life for much longer. Favorite genres include horror, science fiction/fantasy, and comedy. Favorite movies are V for Vendetta, Boondocks Saints, Kiss Kiss Bang Bang, and The Godfather.
Free State Of Jones Contest: Win The 100: Season 3 On DVD From Warner Brothers