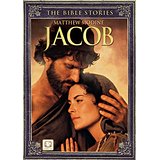 I have previously reviewed movies from the Bible Stories collection including Samson and Delilah and David. I also reviewed Abraham, which was one of the earliest stories in the Bible but not as early as Noah or, of course, Adam and Eve. The Bible Stories: Jacob (or The Bible Collection: Jacob) follows up on the story of Abraham, since Jacob is his grandson. I have also just watched The Bible Stories: Joseph which I will review later, but I mention it because Joseph is Jacob’s son.

Isaac (Joss Ackland) had two sons who were very different, Esau (Sean Bean) and Jacob (Matthew Modine). Esau is the first born and seems a natural leader. Esau is a great hunter and fighter who is pursued by many women in the area. Jacob is a shepherd who is gentle and somewhat unsure of things. Jacob is favored his mother, Rebekah (the famous Greek actress Irene Pappas, The Guns of Navarone, Zorba the Greek). Esau is the natural choice of his father, Isaac. Rebekah says that she had a vision when she was pregnant that the elder will serve the younger. Jacob is uncertain and hesitant about many things but at times seems to covet the role of heir. Esau makes a deal to give his inheritance away for porridge that Jacob is making. Time passes and Isaac grows old and blind, and it is time to pass on leadership of the tribe. He is to give his blessing to Esau. Rebekah conspires to deceive Issac and have him give the blessing to Jacob. Jacob reluctantly agrees. The plan succeeds but infuriates Esau who vows to kill Jacob when Isaac dies. Rebekah persuades Jacob to take provisions and a dowry for marriage to the land of her brother, Laban (Giancarlo Giannini, Casino Royale, Hannibal). During his journey, Jacob is robbed by one his brother’s warriors. Jacob arrives in Harran penniless. Before he arrives, though, he has a vision in which God speaks to him and tells Jacob that Jacob will always be safe and prosperous. Laban welcomes his nephew but is disappointed that he has arrived empty-handed. Jacob has already been smitten by the younger daughter of Laban, Rachel (Lara Flynn Boyle, Twin Peaks, Red Rock West, Men in Black II). Laban proposes that Jacob be an indentured servant for seven years to earn Rachel. Jacob agrees. After the seven years are over, Laban ingeniously deceives Jacob by secretly consummating a marriage in the dark to the older daughter, Leah. Jacob is furious. He has brought great prosperity to Laban’s house, and Laban proposes that Jacob can have both his daughters, but he must work another seven years to earn Rachel yet again.

I will not conclude the story of the hour-and-a-half movie. You will know the ending if you know your Bible. The story is well told, but a somewhat unsettling story which leads very naturally to a totally separate movie that I will review shortly. In this case, I’m going to suggest that the sequel, Joseph, will be the better story and the better movie, but they definitely benefit from being watched together.

Tuesday Round Up: July 12, 2016 iZombie: The Complete Second Season