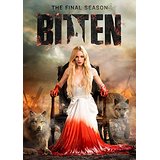 From the very beginning one can see there was great potential here. The show was based on a collection of books that appear to be quite popular. They’re called The Outworld series, written by Canadian author Kelley Armstrong. The show avoided most of the standard clichés. No full moon reference at all here. The werewolves “change” at will or when emotionally charged (“you won’t like me when I’m angry”). There are no silver bullets. These guys might be stronger and harder to kill than a human, but severe body trauma or blood loss kills them just like anyone else. No pentagrams or wolfbane to be found in the show. Such potential. After three years, the ride comes to an end with all of that potential unfulfilled. The werewolves might have been hard to kill. Alas, the show was not.

Bitten told the story of Elena, played by Smallville’s standout actress Laura Vandervoort. Elena is a werewolf. Any aspect of her normal life is long gone. The show long ago ceased in any attempts to have the character try to balance the two lives. The show was at its best when it told the story from the point of view of Elena. She’s a unique character in this world. She’s the only female werewolf known to ever exist. The idea is that women are not physically strong enough to survive the “change”, and only boys carry the trait genetically. That puts Elena in a rather unique and clever place for both the show and werewolf mythology. Some might find it a bit sexist, but we won’t go there.  Vandervoort is also a good enough actress to be interesting, and even at times compelling, in the role. There wasn’t any help here from the writers, cast, or crew. The plot moved at an annoyingly slow pace, and after 10 episodes you look back and see just how little story was actually told. Now after three years the show ends, and I don’t feel like the journey took me very far. Vandervoort is also getting frighteningly thin. Her face bones are protruding from her skin these days. She makes Calista Flockhart look like Orson Welles. I kept screaming at the screen, “Eat a burger, for crying out loud.” Maybe it’s just the Italian in me.

It doesn’t help that the cast is particularly weak, even though the action element was cranked up quite a bit this season. Greg Bryk as the alpha Jeremy literally puts me to sleep. I’ve never encountered such an uninspiring leader before. The other “cousins” are little better. Greyston Holt plays Clay. He’s the one who bit Elena and was a former lover. They’ve been trying to pick up where they left off. I guess you could call them kissing cousins. (Yes, I know it’s just a cover story.) He’s got that look down stone cold. But there’s no chemistry between Vandervoort and either of these two actors. Again, that ends up making it harder to suspend belief.

The werewolves themselves are actually not bad. They do have an obvious CG look to them, necessitated by budget on a small television production. But I rather like the design, and there are some pretty solid facial moments where I saw more emotion than I did with some of these actors. You’ll also notice much more gore and blood this season. They definitely pulled out the horror trends in the story. Most of it looked pretty good. Production values were never an issue with me on this show.

The final season dealt with an American vs. Russian pack ideal that carries with it shades of the Cold War. But that’s an old story and not very well told here. The Russian Alpha has a blood-feud with a guy named Roman Sasha Antonov (Ralston). Elena ends up wanting to protect Sasha and his children when she learns he is her father. Is it me, or has it been impossible to hear a character utter “I’m your father” without laughing a little since The Empire Strikes Back? So we end up with a three-way conflict that always teases a big climax, but it never comes. Jeremy is preparing for some kind of war that we never see. The “mutts” from last year have been completely abandoned for this season. It looks like costs were an issue, and there are far less cast members appearing this season. It’s a bottle season that is in its death throes just minutes into the first episode.

You get 10 episodes on three discs. There’s a 5-minute feature on the season with no real closure. You get some deleted scenes, and before you know it, it’s all over. We finally do have an answer to the question I asked after the first season: “When will it stop?”

Gino Sassani is a member of the Southeastern Film Critic's Association (SEFCA). He is a film and television critic based in Tampa, Florida. He's also the Senior Editor here at Upcomingdiscs. Gino started reviewing films in the early 1990's as a segment of his local television show Focus. He's an award-winning recording artist for Omega Records. Gino is currently working on his 8th album Merchants & Mercenaries. Gino took over Upcomingdiscs Dec 1, 2008. He works out of a home theater he calls The Reel World. Favorite films: The Godfather, The Godfather Part II, The Body Snatcher (Val Lewton film with Karloff and Lugosi, not the pod people film), Unforgiven, Gladiator, The Lion King, Jaws, Son Of Frankenstein, The Good, The Bad And The Ugly, and Monsters, Inc.
The Bible Stories: Joseph Tuesday Round Up: July 19, 2016