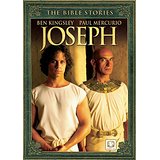 I have just reviewed The Bible Stories: Jacob in which I may have left people hanging, because I teased the end of the story. Of course that only applies to people who have never read the Bible. The Bible Stories: Joseph will give you some of those answers if you never got to the Good Book. Jacob indeed survives and thrives, so God was good on his word. Jacob had many sons, but in this film he is older and played by Martin Landau, not Matthew Modine. Jacob had 12 sons with two wives and two handmaids who were all involved with the births. Jacob (also known as Israel) entered into a covenant with God to create a new nation of plenty and prosperity.

The Bible Stories: Joseph is the best of this series that I have reviewed. The story is very well told and extremely compelling, moving, and inspirational in real ways. The story starts in the middle by introducing Potiphar (Sir Ben Kingsley), the Pharaoh’s most trusted advisor, as he is looking over a potential new slave. The slave is Joseph (Paul Mercurio) who Potiphar buys in a fairly apathetic fashion, but this new slave becomes enormously profitable in short order. Everything that Joseph becomes involved with generates fantastic bounty and success. This is noticed first and foremost by Potiphar’s wife, Zuleika (Lesley Ann Warren) who gets Joseph more responsibilities, but what Zuleika really wants is more access to Joseph. When Joseph repeatedly refuses her advances, she accuses him of rape. By this time, Potiphar knows Joseph so well and values him so highly that he finds a way to avoid giving the death sentence that Zuleika demands. He sends Joseph to the prison, where his services become even more productive and beneficial. The story then weaves the earlier story of Joseph into the telling, the story of Joseph’s brother’s and their jealousy.

Over time all of Jacob’s older sons disappoint him and make it impossible to trust their judgements. Of all his sons, Jacob favors Joseph because he is the closest to the words of God that Jacob lives by. This fact is not lost on all the brothers, who are consumed by jealousy and are filled with emotions ranging from anger to hate. Some of the brothers want to kill Joseph. Joseph is thrown into a pit while they decide what to do. One of the brothers convinces the others that they should sell Joseph into slavery rather than kill him. This is how Joseph winds up a slave in the court of the Pharaoh.

The cast includes great actresses like Monica Bellucci (Spectre, Matrix Reloaded, Matrix Revolution, The Passion of the Christ), Alice Krige (Sleepwalksers, Star Trek: Voyager, Star Trek: First Contact), and Dominique Sanda (The Garden of the Finzi-Continis, 1900, The Conformist) which add greatly to the overall quality, but it is the strength and complexity of the story that is the real compelling factor here. It also has the great contributions of composer Ennio Morricone who has guided the musical themes throughout the series. The production values are also among the best I have seen in the series. I can safely recommend this movie for its story and execution alone, and you do not need to be religious to become totally involved in this classic story.

The Infiltrator Bitten: The Final Season