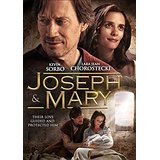 For a film called Joseph and Mary, the titular characters are little more than a footnote in the overall film in my opinion. Jesus has an even smaller role, which is a notable first for film when it comes to films that reference the character. I give it points for it focusing on less notable people rather than the big three. However, that said, execution of the project was a failure to launch due to predictable storyline and lackluster performances.

The first half of the film is underwhelming, merely the setup for the bigger aspect of the story, which is forgiveness. The film does a good job showing the evils that man is capable of, although a bit more gore would have improved getting that point across; however, I understand that is a family-friendly story and understand the necessity to keep matters PG. That said, the largest theme of the movie is the decision between choosing forgiveness or acting on vengeance. That is the dilemma that Elijah finds himself in. Having that as a theme served as more of a crutch for the film than asset if you ask me, especially given that it is a family-friendly story. I’m sure without much provocation you can figure out how things turned out, and that preconceived knowledge and the fact that matters didn’t deviate in the slightest is what diminishes much of the mystery of setup.

Truthfully, I know that this was meant to be a family-friendly experience, and I am not in the intended target audience for this picture, I feel that the story needed to be more intense with more of a struggle regarding the decision to exact revenge need to be taken. Elijah’s position as a rabbi provides a decent internal struggle, but still, there need to be more built upon the rage and anger he felt and an all-consuming desire to right a perceived wrong. Majority of the threat, the subject of taking a life was discussed in a calm rational manner, and it made the idea unrelatable to me. With more intensity and anger, I could have gotten behind it, a stronger commitment as to who among us has not felt the desire to get payback at one level or another.

Accompanied by generic performances, I’d say that any hope that Joseph and Mary had when the credits began, was lost by middle of the movie.  The cast is made up of a couple household names such as Kevin Sorbo and Lean Jean Chorostecki as the titular characters but provides little movement for the project. As I mentioned before, they are little more than footnotes, and when they are featured the words feel unauthentic and phoned-in. Even the guy portraying the main character Elijah was underwhelming in his duties. And without a strong lead, the story doesn’t even make it off the ground.

In conclusion, the target audience may accept the story, but probably only barely, and anyone outside the targeted sphere is likely to be dissatisfied with the film and will likely forgot the entire experience within an hour of watching it.

Jeremy Butler is a film school graduate of the International Academy of Design and Technology. He is been writing for Upcomingdiscs since 2012; however, movies have played a big part of his life for much longer. Favorite genres include horror, science fiction/fantasy, and comedy. Favorite movies are V for Vendetta, Boondocks Saints, Kiss Kiss Bang Bang, and The Godfather.
Tuesday Round Up: July 19, 2016 My Golden Days