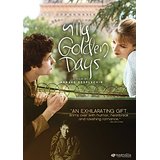 On the surface, there’s nothing particularly remarkable about Paul Dedalus, the French anthropologist at the center of My Golden Days. As he prepares to return to France after an extended work stint in Tajikstan, Paul reflects on a trio of key moments from his childhood and young adulthood. Much of what Paul recalls — the death of a parent, his first love, and the aching of a long-distance relationship — is completely relatable. Yet filmmaker Arnaud Desplechin aims to present Paul’s life as the most romantic, tragic story ever told.

“I seek shards of memories within me. I recall nothing. Everything is erased…except three or four snippets.”

After a brief prologue establishing Paul (Mathieu Amalric) in the present day, the film dives into the main character’s memories. My Golden Days/Trois Souvenirs de ma Jeunesse is divided into three chapters: “Childhood” gives us a glimpse into Paul’s early home life, which included an emotionally-troubled mom and a dad who was frequently absent. Eventually, Paul moves in with his kindly great aunt. “Russia” shows us an adolescent Paul (Quentin Dolmaire) during a high school trip to Minsk, where he and a friend agree to smuggle documents and money to Russian Jews. Finally, there’s “Esther”, which is by far the longest segment in the film. Paul (still played by Dolmaire) returns home to Roubaix from university to visit younger siblings Delphine (Lily Taeib) and Ivan (Raphael Cohen), but he ends up meeting and kicking off a rocky relationship with the love of his life, Esther (Lou Roy-Lecollinet).

Fans of Desplechin’s work are probably familiar with the movie’s hero. Amalric previously played Paul Dedalus in the filmmaker’s 1996 effort My Sex Life…or How I Got Into an Argument. I haven’t seen that earlier movie, but I had no problem following or getting invested in Paul’s story in My Golden Days. (Though I suspect the newer film connects to My Sex Life…in interesting ways.)

Except for his work in the prologue and a mournful, melancholy monologue towards the end, Amalric mostly cedes the spotlight to his younger, more inexperienced co-stars. The talented French actor — who is familiar to American audiences thanks to his work in movies like Quantum of Solace, Munich, and The Diving Bell and the Butterfly — still manages to give the movie a subtle jolt whenever he does appear on screen. (I enjoyed the understated battle of wits between present-day Paul and the government official who suspects him of being a spy, which leads into the “Russia” chapter.)

But it’s Dolmaire and Roy-Lecollinet — two performers making their big-screen debuts — who capably carry the action in My Golden Days. The two display a nice spark during their initial meeting, which includes easy, witty, mildly-crass banter. The pair embark on a tumultuous relationship that never seems to find solid footing since Paul is constantly bouncing back and forth from studying in Paris to visiting his home (and Esther) in Roubaix. It’s no spoiler to say both Paul and Esther find emotional (and physical) solace in other people to stave off loneliness, which leads to some hurt feelings. Desplechin alternately presents these other dalliances as routine for a pair of French youth and as a shattering betrayal.

I just wish the filmmaker had displayed as much interest in the other parts of Paul’s life. “Childhood” gets the shortest shrift here, which is a shame because that chapter has a truly startling beginning. The chapter starts with a very young Paul using a knife to fend off his disturbed mom; it’s like something out of a psychological horror movie. Desplechin then impressively shifts gears and frames “Russia” like a spy thriller. I still would’ve loved to have seen much more than 10 minutes of the movie’s 124-minute run time devoted to “Childhood.” And while I’m ok with the extraordinary jaunt in “Russia” to be a little abbreviated, Paul giving up a piece of his identity during this segment feels a little glossed over with so much emphasis on his romantic life in the movie’s latter half.

Throughout My Golden Days, Desplechin uses a variety of French New Wave techniques, like telescoping to transition between time periods, sporadic split screens, and characters breaking the fourth wall. But except for the telescoping, they mostly seem tossed-in and don’t totally feel like a vital element in telling Paul’s life story.

Then again, maybe the idea is that anyone’s life can seem like a movie…if it’s framed the right way.