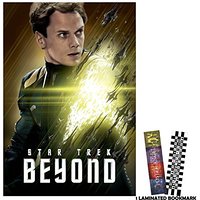 Every Star Trek fan knows the words by heart. For 50 years they’ve heralded the promise of something special. From the television show that couldn’t but did anyway to 12 feature films. Would #13 be the lucky one? The trailers left many of us worried that it would more than likely be unlucky. And we needed so much for this one to be great. Since the last film we lost Leonard Nimoy, who was most certainly the heart of the franchise on the screen. He was also the gateway between the two incarnations. That loss was eventually expected. Then we tragically lost Anton Yelchin, who was one of the industry’s rising stars. It’s the 50th anniversary, and with all this we really needed something good. Trailers said we were out of luck. They say you shouldn’t judge a book by its cover. I’m here to tell you that you can’t judge a film by its trailers. Star Trek Beyond turns out to be not only what the fans wanted… but what we desperately needed.

“This time the frontier pushes back.”

We’re 966 days into the five-year mission of the starship Enterprise. For Kirk (Pine) and his crew, exploration of deep space has become a little mundane. It’s also Kirk’s birthday, something he hopes to keep quiet. It’s a private celebration in Kirk’s quarters with McCoy (Urban) that is more than a little reminiscent of the scene in Wrath of Kahn. Kirk is also considering a promotion to Vice-Admiral. Meanwhile Spock (Quinto) is also considering a change in his life. He has received some touching news that makes him rethink his own life course. He has split with Uhura (Saldana). Sulu (Cho) is looking forward to spending shore leave with his family as they approach a distant new starbase. The routine of deep space travel is about to be change for everyone.

An alien mix-up near the starbase has the Enterprise crew cut their vacation short. What they believe is a simple assistance mission turns into a tragic confrontation that leaves the beloved ship (once again) ripped to shreds. The surviving crew find themselves at various places on the planet and at the hands of Krall, played by actor extraordinaire Idris Elba. Krall wants to prove to the Federation that their concept of unity has made them weak. He has discovered an ancient weapon that could destroy the entire Federation. Of course, it’s up to the stranded crew to stop him before he can complete his mission.

If that sounds familiar, it’s because that’s been the plot of almost every one of the Star Trek films so far. It doesn’t matter if it’s Khan (twice), a mad Klingon, Soran trying to get back to the Nexus, or even a Federation official who has found the Fountain of Youth and wants to destroy a planet. In fact, there is much in common here with Star Trek: Insurrection. There’s another potential Fountain of Youth and an area of space with much the same conditions as the Briar Patch of that film.

Justin Lin brings the action we expected from the Fast And Furious franchise director. There’s the already-mentioned tearing apart of the Enterprise and plenty of fisticuffs. Of course, there has to be a vehicle stunt ride, and this time it’s Kirk on a classic motorcycle. These big tent-pole moments might well be an obligatory part of the economic reality of a franchise film, but they aren’t the heart of this one. Lin accomplishes so much more when there is less. It’s the character moments that made this film such a pleasure for me to watch. That’s what’s going to bring me back for more, and I wish that Simon Pegg and Doug Jung, the writers of the film, understood that. I get the sense they fell into these moments. It’s the actors who made them the wonderful pieces they turned out to be. These guys understand these roles now. There’s a comfort level here that wormed its way into my heart no matter how hard I might have resisted. The triumvirate of Kirk, Spock, and McCoy almost feels like it did with the original actors. There’s magic in these moments, and it’s worth the price of admission.

One of the smartest elements of the script is the way it deals with those character moments. The crew are separated into small groups where the interactions can be more intimate. McCoy and Spock pair up while Scotty is helped by a stranded member of another crew. Her name is Jaylah, and she’s played by Sofia Boutella under a lot of prosthetics and tattoos. She’s an innocent character who represents us in the film. She’s been on her own for some time, and her integration with the bridge crew offers her a growing experience. Like us, she ends up wanting to be a part of this group of extraordinary people.

I have to admit that I found myself more distracted than I should have been. Of course, I’m talking about Anton Yelchin. You should stick around for the dedication. It’s only a small mention, but I really felt like I had to see it. Our screening included the first two films. I missed the first but I couldn’t quite stop looking at Chekov differently. I noticed the subtle things in the performance I missed before. In Into Darkness there’s a wonderful reaction I totally missed the several times I watched the film before, even my recent 4K foray. When Scotty quits, Kirk turns to Chekov and tells him to put on a red shirt. Did you ever notice the look of doom and dread Yelchin gives just then? Yes, it was an homage to the traditional fate of a Star Trek crewman wearing the scarlet garb. The thing is…I missed it every screening before. Anton was truly a young talent with one heck of a career in front of him. This series of films will never quite be the same without him. We miss you, Anton.

Fans won’t have trouble finding plenty of Easter eggs and tributes in the film. Some are overt, such as a wonderful photograph moment that Spock enjoys as the film ends to subtle little things like the number of days into the five-year mission. You see, Star Trek first aired 9/66. There’s a pretty good riff on Shatner’s tear-away shirts in the original series. The film contains a lot of moments that pay homage to Leonard Nimoy. To his credit, Quinto does one hell of an emotional shout-out to the man who first wore the pointy ears. It’s that connection to the original material that makes this a pretty special film in spots. Fans of the final Trek series Enterprise will get a treat with a pre-NX ship and the overall-styled uniforms from that era. There’s more here than you could possibly discover in one viewing. I suspect the film will score a lot of repeats at the box office.

It’s not a flawless movie, and it again borrows perhaps too much from previous incarnations. I’m talking about the attempt to reproduce iconic scenes, not the character moments and emotions. I’m not sure I’m hip to the idea of punk music saving the galaxy, but perhaps here I’m just showing my age. Idris Elba isn’t quite used as dynamically as I hoped. He’s a great actor with the potential to be an awesome big bad, but he doesn’t quite ever catch his stride here. Much of the film finds him under heavy makeup, and he’s certainly delivering every minute he’s on the screen. He just never had that presence I expected to experience. Instead Krall is a typical bad guy with a unique motivation, but little more. He won’t be remembered as one of the franchise’s iconic villains. It’s in the writing, not the performance.

Flaws aside, it’s a good film that fits rather snugly into the franchise. “Well, that’s just typical.”

Gino Sassani is a member of the Southeastern Film Critic's Association (SEFCA). He is a film and television critic based in Tampa, Florida. He's also the Senior Editor here at Upcomingdiscs. Gino started reviewing films in the early 1990's as a segment of his local television show Focus. He's an award-winning recording artist for Omega Records. Gino is currently working on his 8th album Merchants & Mercenaries. Gino took over Upcomingdiscs Dec 1, 2008. He works out of a home theater he calls The Reel World. Favorite films: The Godfather, The Godfather Part II, The Body Snatcher (Val Lewton film with Karloff and Lugosi, not the pod people film), Unforgiven, Gladiator, The Lion King, Jaws, Son Of Frankenstein, The Good, The Bad And The Ugly, and Monsters, Inc.
Captain Fantastic Lights Out