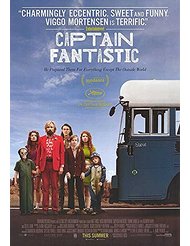 Captain Fantastic has nothing to do with Elton John. (It turns out that’s not entirely true, because director/writer/actor Matt Ross (Big Love, Silicon Valley) found out his mother played Captain Fantastic and the Brown Dirt Cowboy all the time, and it must have imbedded itself in his subconscious). The story in the movie starts in a very Lord of the Flies way, with camouflaged faces hidden amongst the leaves of the woods. They are children, and one of them leaps from the bush with a knife and cuts a deer’s neck. There are seven children and they all belong to Ben (Viggo Mortensen, Lord of the Rings). The oldest boy has killed the deer, and Ben baptizes him in blood and says he is now a man. This would lead one to think this is some kind of radical cult. Anything dangerous and deranged is soon dispelled. It is simply a father teaching his children survival skills. It is a father holding his family together and bonding with them and loving them and passing on knowledge. Ben’s form of home schooling is extremely rigorous and intellectual. This has been a lifestyle for a very long time. His wife has recently gotten very ill and is not with them anymore, living in the woods. Then she dies. Her father, Jack (Frank Langella, The Americans) hates Ben and says he will have Ben arrested if he comes to the funeral, but Jack’s wife, Abigail (Ann Dowd, The Leftovers, The Masters of Sex), hopes a compromise can be formed. Ben decides he won’t go to the funeral, but the children are furious and sad about this. Eventually Ben relents, and they take an old converted bus and hit the road.

The movie is absolutely beautiful. It is a celebration of both nature and a way of life that has almost disappeared. The family is like no family you are likely to know. This becomes especially apparent when they visit family members on the way. Harper (Kathryn Hahn, Transparent, Parks and Recreation), Dave (Steve Zahn, Treme, Modern Family) and their two boys are a typical American family, and they couldn’t be more different than Ben’s brood. In fact, Ben’s philosophies and methods might be considered controversial, so I won’t reveal much about them and let you discover for yourself. If you go see this film, you can decide if it’s a good family or not. Ben is mostly a very reasonable and civilized person, but it is not to say he compromises his principles in any way.

Ben and Frank have an ultimate confrontation over the fate of the children. It is moving primarily because there is a sense of compromise finally discovered. I have to say the family in this film is truly amazing to an almost unbelievable degree. I’m not sure the results that Ben achieved are actually possible.

Captain Fantastic is a unique American film. You won’t see anything quite like it. It is well written and directed by Matt Ross, who is primarily known as an actor. It is a very confident feature film debut. It really is a must-see in this film season, but I am sure most people will come out conflicted and challenged.