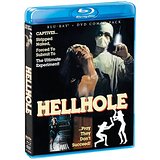 They really don’t make horror films like they used to. I understand that each decade graces us with new, unique genre mechanics, but there is just something to be said about the horror elements found in 1980’s cinema. While Hellhole does not have any supernatural or modern science fiction qualities, it does carry the classic “mad scientist” narrative quite well. The film also boasts one of the silliest, yet terrifying, villains I have seen to date. Hellhole is a film that gracefully slips below the radar, but for the cult cinema connoisseur, the strong writing is really what makes this film a great find.

The film opens with Susan (Judy Landers) escaping from a home invasion: Her mother has stolen implicating bank statements from the doctor she works for, and a goon is attempting to get them back. The goon is none other than “Silk” (Ray Sharkey), a rather flamboyant hitman, clad in a studded leather suit, a long red scarf, and a silly hairdo. Susan knocks herself out and finds herself in an all-woman insane asylum, suffering from amnesia. Silk attains an orderly position at the hospital to wait for her memory to return. To my pleasant surprise, the plot did not end here. In fact, the film includes a parallel storyline to Silk: the board of medicine has hired a private investigator (Richard Cox) to take a position as an orderly in an effort to find incriminating evidence against the mad psychiatrist, Dr. Fletcher (Mary Woronov).

The more I think about the basic outline of the plot, the more complex it becomes. It is incredible that so much effort was put into a schlocky film that was just forgotten. Realistically, it does make sense, because the acting is terrible and there is enough nudity and sex to classify it as sexploitation. So much so that crucial information and plot devices are inserted into scenes with rampant sexual activity. It really is a shame, because if that is not your cup of tea, you definitely will not see the value in the brilliant writing. Aaron Butler really expresses a great complex argument regarding negative dualism within the medical field. In other words, sometimes the “mad scientists” aren’t just the ones doing the actual experimenting. However, that message gets undermined by copious amounts of breasts, drugs, and promiscuity.

In addition to the complex plot structure, the characters are also written very well. For example, it is implicitly revealed that Silk is most likely a serial killer, as he has established a very unique modus operandi that makes his silly appearance pretty damn scary. Dr. Fletcher is a mad scientist, yes, but it is also implicitly revealed that her motives aren’t just for science, which is an interesting homage to Woronov’s status as an ex-Warhol superstar (specifically one from Chelsea Girls). Also, there is a completely unexpected appearance from Robert Z’Dar, who plays a beefy, sadistic security officer, or Dr. Fletcher’s brawn. While he doesn’t get much development, the actions he takes within the film are creatively horrifying, making him seem as if he has his own unique brand of insanity.

Overall, if you are into schlock, this film is most certainly for you. However, if you do watch it after reading this review, really look for the dualism I have noted. It has a very strong presence throughout the film, and that is what makes it very interesting. That is also why it is hard to rate it any lower than a three: it really is that impressive.