Person of Interest: The Complete Fifth and Final Season (Blu-ray)

Posted in: Disc Reviews by Brent Lorentson on July 27th, 2016 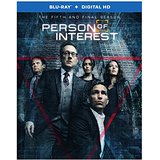 If there was a show I could recommend to someone who is looking for a smart thriller that doesn’t talk down to its audience, I couldn’t point to Person of Interest fast enough.  It’s a show that may be labeled sci-fi for some, yet its science and technology may not be so far off.  The idea of our government or private agencies using security cameras or our phones to monitor us is no longer just a rumor muttered around in circles of conspiracy theorists, but is quickly becoming a reality of day-to-day life. I kind of saw the show as a riff on the Batman story, subtract the cape and cowl and exchange it for a suit, then throw in a dash of George Orwell’s 1984, and you can see where the show got its start.  For those who have never seen the show, you are doing yourself a great disservice by not watching the show, and to step in during its fifth and final season, I believe it’s safe to say you’d be more than a little lost.  So what does creator Jonathan Nolan have to offer us in these final 13 episodes?  To get straight to the point, this might be one of the best final seasons for a show (at least since Justified) that I can recall seeing.

When we last saw John Reese (Jim Caviezel) and Harold Finch (Michael Emerson), they were struggling to compress and protect The Machine that they were able to code into a briefcase and onto several drives.  All this is while Samaritan has become fully functional as an artificially intelligent program that seems to be able to track anyone, anywhere with the aid of a secret government task force.  Not only does our team have to go underground, but now they are constantly in danger with targets on their back; their only protection is their manufactured identities The Machine created for them. (Still with me?)

With the final season shorter by about nine episodes, you may feel like you are missing out, but the positive from this is that every episode manages to count and gives us a payoff.  Yes it’s great seeing The Machine and Samaritan square off head to head in a very underdog-matchup sort of way, but this final season delivers so many other pearls of excitement, it’s hard to go forward without giving too much away.

Team Machine is forced to make their headquarters underground in an old subway terminal.  The unique way Root and Harold manage to bring The Machine back to life is not just clever, but it leads to a few mishaps that are not just entertaining but lead to some rather dangerous complications.  The focus on this last season seems to be about Harold and his faith in The Machine and if it can make the “right” decisions on its own, and prompts the question: is it possible for a machine to care?   There are a lot of moral questions that are not only posed this time around, but are also confronted; the consequences of actions and in other instances inaction weigh heavily on the events of the final season.  It’s the toeing the line of ethical decision-making that elevates the show from being a simple hour-long crime caper.

For those wondering what happened to Shaw (Sarah Shahi), you’ll get your answers, and I’ll drop you a hint: it makes waterboarding seem like a tickling romp.  But for me, the character that simply owns this season is Root (Amy Acker).  There is a lot Root is faced with this season, between how she copes with Shaw and some interesting twists along the way that for me show how perfect the casting turned out to be with Acker.  Then we have Detective Fusco (Kevin Chapman); a lot of his character arc was completed seasons ago, and for the most part he’s just been a convenient character piece for when Team Machine needs something.  As it turns out, we get to see Fusco make an even greater impression on the team as he handles cases that may or may not have deeper connections to Samaritan.  Will Team Machine finally let Fusco behind the curtain to see what he’s been a part of all this time?

There is an introduction of Jeff Blackwell (Joshua Close) that I believe will be the most frustrating character to come on to the show simply because of the havoc he brings to Team Machine. Kudos to Close for not taking this role over the top, but instead keeping him a rather sympathetic character. It’s frightening how easily this average, everyday guy can be quickly molded into a dangerous individual; kind of makes you wonder how often this could be happening in our society, when every week there seems to be some sort of mass shooting.

What I love about this season is how the writers managed to bring the story full-circle as we see figures from the past make “random” appearances.  Oh, and did I mention the great action scenes this season? Whether it’s the hand-to-hand showdowns or the over-the-top shootouts, this season is a blast in the action department.  But the most rewarding element this show offers is that each character is given proper closure, which doesn’t necessarily mean a happy ending, but instead I watched this and for once felt satisfied with the ending.  Sure, they could have squeezed out one more season, but I feel it would have felt forced.

As a show that dared to show the dangers of how the invasion of personal space can affect us on a day to day level, it never felt like it was forcing a political agenda down our throats, but instead was entertaining us while at the same time nudging us to be curious about who all may be looking over our unsuspecting shoulders.  While this had the weekly crime-caper element, it squeezed in enough heart and thought-provoking material that elevated it past the typical hour-long network drama drivel.  Though the series may have come to a close, hopefully it will continue to live on in a world of Netflix and Amazon Prime where a TV show is a few keystrokes away and still feels as fresh as the first day it aired.

Person of Interest Season 5 is presented in the aspect ratio 1.78:1.  The 1080p image is arrived at with an AVC MPEG-4 codec at an average of 16 mbps.  While the show doesn’t rely too heavily on a robust color palette, more attention is placed on the black levels.  While we don’t have any colors that appear crushed, there isn’t much in the way of detail with the exception of the tighter close-up shots, where detail would of course be expected.  Some of the color at times even feels washed out and gives it a very cold look; this is of course the look they are going for. After all, this is supposed to be a digital landscape. While it may not be a created space, it still has the world depicted as one heavily controlled by a technical artificial source.

The DTS-HD Master Audio 5.1 track is a track that has a very solid sound design that is heavy on giving us a dynamic range of sound.  From simple things such as shootouts to an episode where static interference is used as code, the surround speakers are wisely utilized.  While the dialog is clear throughout, the music is also beautifully rendered for an immersive experience.

2015 Comic-Con Panel: (32:59) A Q&A with the cast and writers of the show.  A lot of this has them discussing events that took place in Season 4.  It’s a little depressing hearing the hope they had that there could have been another season depending how many viewers the show could have brought in.

Revelations of Person of Interest: (17:50) A roundtable discussion with the writers and Michael Emerson about the show.  Gets into a lot of heavy spoilers, but is a great look into what the writers were planning for the show from Season 1 to the finale.

Finale for the Fans:  (16:30) Another roundtable discussion about decisions they made with the characters and the story in the hopes of making the fans happy while staying true to the story they were telling.

This is really one of my favorite shows that has been on TV in the past decade.  Even with its science fiction edge, the show manages to always stay grounded in reality.  While it’s sad to see the show come to an end, this is already a series I look forward to binge-watching down the road.

Brent Lorentson is a horror writer and film critic based out of Tampa, Florida. With a BA in Digital Film, he co-wrote and co-directed Scavenger Hunt. His short stories have appeared in various horror anthologies. In 2019 his short script Fertile Blood will be a part of the anthology horror film Slumber Party. He is currently working on his first novel A Dark and Secret Place set to be released in late 2019. Favorite Films: Taxi Driver, Fight Club, I Saw the Devil, The Wild Bunch, Dawn of the Dead, A Clockwork Orange, Pulp Fiction, Heathers, The Monster Squad, and High Fidelity.
Tuesday Round Up: July 26, 2016 Hellhole