Posted in: The Reel World by Brent Lorentson on August 8th, 2016 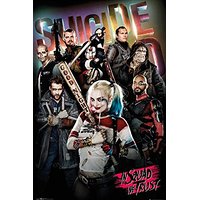 In the days leading up to the release of Suicide Squad, over the internet there has been one of the most vicious attacks on a film before its release that I can remember.  Sure, we had all the negative talk about Ghostbusters,but that was before anyone had ever seen the film, and as screenings came along, opinions seemed to sway.  Now I was lucky enough to attend a screening Monday for Suicide Squad, and there were up to 150 people turned away at the door because the auditorium was filled to capacity. I mean, the buzz for this was high, and we DC fans were giddy, because this film was our hope that WB would be turning things around.  I mention all this because now this has managed to become one of the worst-reviewed films of the year, and I’m just sitting here like WTF happened, did they see some other cut of the film?  I’ve held off on writing this, because I’ve struggled with the direction I wished to write this.  There’s the comic fan in me that has so much to say, then there is the more critical side, and usually I fall somewhere in between. Then I decided the hell with it, I’m just going to come at this full film geek.  My reasoning, it seems 90% of critics out there have forgotten how to have fun at the movies, and it’s a shame, because I know at some point all of them were film lovers, but at some point they decided to turn their noses up at the trashy and the cool popcorn flicks.  So strap yourself in, and let me give you the real rundown on the film.

After the events of Man of Steel and Dawn of Justice, a government official, Amanda Waller, (Viola Davis) has a plan to get a team of the world’s most dangerous villains to fight the battles the government may find too dangerous to openly confront.  Among these villains are “meta-humans” who have special gifts that can be used as weapons against the “Supermans” of the world.  It’s a dangerous prospect, but as she is pitching this idea, you can’t help but agree with where she is coming from.  This leads us to our roll call to our soon-to-be anti-heroes.

Deadshot (Will Smith) is the world’s most deadly assassin with a gun, a man who never misses his mark.  There’s the killer clown princess, Harley Quinn (Margot Robbie), The Joker’s main squeeze, who also happens to be a psychopath. Diablo (Jay Hernandez), a meta-human with the ability to manipulate fire. Boomerang (Jai Courtney), a thief who uses a unique set of boomerangs to assist him on jobs (oh, and he likes pink unicorns). Then we got Killer Croc (Adewale Akinnuoye-Agbaje), who basically is another meta-human who is half man and half crocodile. Then rounding out the core squad is June Moone (Cara Delevingne), who is capable of summoning an ancient witch, Enchantress, who has some pretty incredible powers.

Personally, the intro to these characters is one of my favorite portions of the film, though it is a bit weird that they give us two introductions to Deadshot and Harley Quinn.  I’m not complaining, but it did seem a bit odd.  Deadshot is pretty much the star of this film; we are getting the Will Smith I’ve grown to miss over the years, the funny and smooth guy who just knows how to steal a scene like in the days of Bad Boys and Independence Day.  For such a deadly character, they soften him up by introducing his daughter, the one person in the world who he doesn’t want to view him as a bad guy.  Will Smith injects so much heart into this character that I think he almost does too good a job, and, well, he doesn’t seem like such a bad guy.  He’s a guy who you can’t help but root for and hope he gets to see his daughter again.  So basically if you are an old-school Smith fan, be prepared to remember why you liked him so much.

This brings me to Harley Quinn. OK, I was a bit bummed when I saw that she wouldn’t be in her trademark red & black jester suit, but then I saw what she would be wearing…Let me take a moment and thank the costume department for this one.  As for the performance, this is probably the best performance we’ve seen since the reboot of the DC universe films.  Robbie doesn’t just handle the psychopath portion of the role, but she also nails the sexual side and most importantly her vulnerable side who simply just can’t resist the Joker despite the grotesque horrors he puts her through.  Despite her being a villain, this is one of the best characters we’ve gotten to see, and it makes my geek side wonder how great this character can grow in future films.  Basically what I’m saying without getting my head chewed off: this is a role on par with Heath Ledger’s Joker.

As for The Joker (Jared Leto) and his performance, well, the bright side is that he does bring a unique style to his character. Though he’s a presence throughout the film, this is not his movie, so I think it’s too early to say how Leto will really hold up. What I do love is the chemistry he shares with Harley.  There’s a moment at a club when a character Joker is doing business with says some objectionable things about Harley; his reaction is this mixture of insane and sweet that had me wanting more.  The dynamic of this couple is nailed perfectly here and has me hoping for a Bonnie-and-Clyde-esque film with Harley and The Joker.

A good portion of the film is setting up the squad and trying to get them to work together as a team. Leading them is Rick Flagg (Joel Kinnaman), who also has a side relationship with June Moone.  It’s the way Flagg is written that frustrates me. Not once could I believe he could control or overpower anyone on the squad. This is the guy who should be the ultimate badass, but he’s the one the squad finds themselves having to protect multiple times in the film.

It’s when Enchantress takes a mission into her own hands and releases her brother, well, that’s where things start to sour for the film.  Just as Enchantress was accidently released, she releases her brother’s essence while on a subway platform.  He’s this ashy/ghostlike figure that is able to spawn these weird rocklike creatures that quickly multiply, and soon enough they are running wild all over the city.

Seriously, is this the fall-back route writers come up with when they do these team up mission films, give us a sub-par villain, then toss in hundreds of minion characters for our heroes to kill?  Marvel is just as guilty of this, but for some reason they don’t get as much backlash.

What we end up with is a film that seems like a Dirty Dozen riff on Escape From New York, as Task Force X (government name for the squad) is dropped into the portion of the city that is in ruins.  Yeah, it’s all kinds of fun seeing the team come together and kill these creatures but we never get a sense of them being a real team that is coming together.  What hurts this film the most is the failure to raise the stakes for the team.  Now, I’m very familiar with David Ayers work. He understands the notion of raising stakes where characters can be killed at any time; look at End of Watch or Fury.  He gets that to really engage the audience you need to take risks and kill characters we may like, and not once do you ever feel these characters are in peril. I put this blame on studio interference.  I may not have been in the room when these decisions were made, but I look at Ayers’ work and I feel confident he knows the rules of Guys on a War Mission films.  I understand making Deadshot a more likeable character and having him not wear the mask just so the audience can recognize him, but the third act of the film just let me down.

As a weird side note, I feel bad for the writers of future DC films. The characters in Suicide Squad are so likeable, and they are the villains.  I think the villains may have been humanized so much that down the road we’ll be rooting for them more than Batman or Superman.

But what matters is how much the film worked as a whole, and this is easily the best of the DC film universe (the rebooted one).  It gives me hope for the direction these films will be going.  Right now WB is their own enemy with these films. Stop trying to be Marvel and do your own thing.  More chances should have been taken with this film. I feel this is a really good movie, but there was a chance for this to be great if they only were brave enough to take this further.  Deadpool showed us that an R-rated superhero film can work, but it did so because it took chances.  In the end it’s up to the audience on what will happen with these films.  I hope people flock to this and the studios can put more faith in their riskier films. While this may not be a homerun, it’s still a solid two-base hit.

Brent Lorentson is a horror writer and film critic based out of Tampa, Florida. With a BA in Digital Film, he co-wrote and co-directed Scavenger Hunt. His short stories have appeared in various horror anthologies. In 2019 his short script Fertile Blood will be a part of the anthology horror film Slumber Party. He is currently working on his first novel A Dark and Secret Place set to be released in late 2019. Favorite Films: Taxi Driver, Fight Club, I Saw the Devil, The Wild Bunch, Dawn of the Dead, A Clockwork Orange, Pulp Fiction, Heathers, The Monster Squad, and High Fidelity.
Keanu (Blu-ray) Blindspot: Season 1 (Blu-ray)