Posted in: Disc Reviews by Brent Lorentson on August 8th, 2016 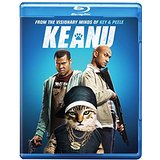 When I first saw the trailer for Keanu I wasn’t sure if what I was watching was a real trailer or simply a sketch from the Key and Peele Show. Thankfully this turned out to their first starring foray in taking their talents to the big screen.  With one look at the trailer, I felt they were attempting to capture the over-the-top stylish action we got in most 90’s action films, Face/Off is the first that comes to mind, but really there are countless examples.  But the real star of the film is little Keanu himself, the ball of feline cuteness that will either have you embracing the film from the start or have you rolling your eyes (yeah, I’m talking about those cat haters out there).  Grab your Glock, and don’t forget the catnip, as we scratch a little deeper into Keanu.

Two ruthless assassins come into town, hired to take down members of a gang.  In the midst of the gunfight, a little kitten manages to make an escape. The kitten finds his way to the doorstep of Rell’s apartment. Rell (Jordan Peele) has hit some rough times after a breakup, and Keanu (adorable kitten) seems to be what has brought Rell out of his rut.  But things turn for the worse when Rell’s home is broken into and he discovers that Keanu has been catnapped.  Rell’s cousin Clarence (Keegan-Michael Key) tags along to help Rell find his lost cat. Unfortunately it takes them deep into the street gang underground where they are mistaken for the two assassins.  To rescue Keanu and to ensure they both don’t get killed, Rell and Clarence go ahead and pretend to play the role of the assassins.

OK, so obviously this is a plot that is pretty far from being grounded in reality, but it’s one of those silly what-if scenarios that asks how far would you go for a loved one. We’d all like to believe we’d be like these two as they bumble from drug deals gone bad and into over the top shootouts. What helps keep the film grounded is how Key and Peele play their roles as your very average middle class figures, who just happen to be really funny.  Considering how we’re in a time of racial sensitivity, it’s amusing seeing the two at the bar trying to couch one another on how to be “black”.  There is a lot of this kind of social commentary that is played for laughs while at the same time covering some real issues, like the true gangster genius that is George Michael.

Despite some foul language, it’s sad this has an R rating, because the film has a lot of family appeal.  One of the things I’ve always appreciated about the humor Key and Peele bring to their projects is that it does have a lot of broad appeal, despite having some bad language.  What’s fun with this film is catching all he pop culture references; some are subtle, while others are simply obvious, like when a character has a drug-induced hallucination that thrusts him into a George Michael video.

With plenty of laughs, silly action sequences, and the most adorable kitten to hit the big screen, Keanu is better than many would expect and actually has plenty of rewatch value, which is not easy to find in comedies.  I’m hopeful that this is a positive start to the film careers of Key and Peele, and fingers crossed that there will be more Keanu down the road.

Keanu is presented in the aspect ratio 2.40:1.  The 1080p image is arrived at with an AVC MPEG-4 codec at an average of 25 mbps.  For the most part this is a clean film, with some saturation and solid black separation.  My only complaint comes with the overuse of the rack focus, basically a camera shot where we see foreground and background alternate focus.  This is used a lot and makes the image seem out of focus at times.  I understand this is a creative choice, and, well, with digital cameras it’s a lot harder to pull this off and make it look as smooth as the old-school movies that were shot on film.  But there were no compression issues or any artifacts to be seen.

The DTS-HD Master Audio 5.1 track is a bit over the top.  It works for the film as it uses stingers a bit louder than usual to riff on the more dramatic scenes in the film.  As the characters go through clubs, we get the hip hop music cranked loud, and the bass has a kick that is almost annoying.  But then we get the scenes with George Michael music where it just blends in oddly.  The dialog is clean, and the action scenes just pop from all sides.

Keanu: My First Movie: (3:05) A little segment with the actors sitting down with Keanu, and they give him some advice for his budding acting career.

Deleted Scenes: A little over fifteen minutes worth of footage that was cut; all of it you can understand why it was removed, but there are some pretty funny scenes here, my favorite being ‘Dungeons and Dragons”.

Gag Reel: (5:39) Surprisingly this isn’t as funny as you would expect from these guys, but still worth a watch.

While it’s not a perfect film, it’s refreshing to see a film that goes for the laughs by being funny and not by simply being shocking.  This is a perfect date-night film, plenty of laughs and action to satisfy everyone.  This one is a keeper.

Brent Lorentson is a horror writer and film critic based out of Tampa, Florida. With a BA in Digital Film, he co-wrote and co-directed Scavenger Hunt. His short stories have appeared in various horror anthologies. In 2019 his short script Fertile Blood will be a part of the anthology horror film Slumber Party. He is currently working on his first novel A Dark and Secret Place set to be released in late 2019. Favorite Films: Taxi Driver, Fight Club, I Saw the Devil, The Wild Bunch, Dawn of the Dead, A Clockwork Orange, Pulp Fiction, Heathers, The Monster Squad, and High Fidelity.
Viral Suicide Squad