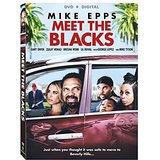 I fear our acceptance of A Haunted House has opened a door that we may never be able to close, as it would cause the disaster that is Meet the Blacks to be born. Parody films have the potential to be extraordinarily funny or incredibly bad. Can you guess what side of the scale this film falls on? Whether it be through overacting or jokes that attempted to play on every stereotype known to man, Meet the Blacks never really manages to get off the ground and make me laugh, which is equally disappointing given the sheer talent pool of comedians in the film: Mike Epps, Charlie Murphy, DeRay Davis, Lavell Crawford, Michael Blackson, Lil Duval, Paul Mooney, and the list goes on. As I said, this was a clear waste of talent.

A clear ripoff of a film which features the allowance of any crime for a predetermined period of time, the overall storyline involves Carl Black (Epps), a father with an on-the-nose name that moves his family out of the south side of Chicago after landing a lucrative contract for his wiring business, or at least that’s what his family believes. In reality, Carl stole the nest egg of a recently incarcerated drug dealer.

The purpose of the move is to provide his family with a better life, away from all the bullets and mayhem of their formal life in Chicago. The irony is that this move comes on the bloodiest night in America, the annual purge. Not taking the threat seriously due to his preconceived notion that “white people don’t purge”, Carl and his family have in store for them a night that is guaranteed to make them miss their old life on the south side.

Unoriginality is the biggest crime in this film. The story relies on every stereotype imaginable in the hope of being relatable to the audience, whether it be the stigma of a black family moving into a gated community or the perception of the kids who view their new stepmom as a gold-digger. I think it is safe to say that people are more likely to be offended by the jokes rather than laugh at them. It truly is a shame, because I sincerely believe it didn’t have to be that way. As I mentioned earlier, with the number of comedians who make appearances, no matter if it is a cameo or a longer engagement, there is no justifiable reason for the lack of originality. I have experienced each of the aforementioned comedians and observed the range of their abilities, and none of them played to their strengths. Their performances are phoned-in, and it doesn’t feel like their hearts are truly in it. I understand this is a parody, but regardless of that fact, the whole point is to laugh, and there wasn’t much of that for me. There was an occasional offhanded comment, but that about sums it up.

Overacting is another thing that brought down the movie’s potential. Again, I recognize that it is a staple for a parody movie. That said, such action must serve a purpose, and I have yet to find it.  I would have hoped for more from Epps. In the past, his outlandish behavior has served him well, but not today. Especially the kitchen scene where he encounters his primary adversary; the exchange is difficult to watch and is likely to have you reaching for the fast-forward button.

The movie makes a last-ditch effort to tug on the heartstrings by focusing on the family element between the cast. But the damage done in the beginning makes even this halfhearted attempt not enough to redeem it. There remains the potential for sequels to follow, but I am confident after watching that the chances of that happening are very low.

Jeremy Butler is a film school graduate of the International Academy of Design and Technology. He is been writing for Upcomingdiscs since 2012; however, movies have played a big part of his life for much longer. Favorite genres include horror, science fiction/fantasy, and comedy. Favorite movies are V for Vendetta, Boondocks Saints, Kiss Kiss Bang Bang, and The Godfather.
Upcomingdiscs Interview With Justin Raleigh: Make-Up F/X Wizard On The Knick Peter – The Redemption