Posted in: No Huddle by Archive Authors on August 11th, 2016 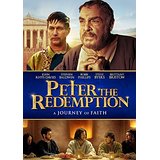 When I think of the Bible, I don’t think of northern Ontario. But there is an appetite for Christian-themed movies, and Canada is one of the most cost-effective places to produce movies. They have studios and sets up there, so it isn’t the worst idea in the world to go there to make any movie, even movies that take place in a very arid, hot, and dusty place. I have reviewed a group of Biblical films that Ted Turner produced for the TNT Network in the 1990’s. They were fairly well made, and, yes, they were made pretty close to the original locations. This new group of Biblical films is not quite up to those standards. I am reviewing The Apostle Peter: Redemption, but the same company has also produced Joseph and Mary, so we can probably expect more.Peter The Redemption follows the story of Peter (John Rhys-Davies, The Lord of the Rings I, II and III, Raiders of the Lost Ark) when he is lying in a Roman prison at the end of his life. He is still plagued by guilt for how he acted when Jesus was taken to the cross to die. The Roman Empire is ruled by the viscious and insane emperor Nero (Stephen Baldwin, The Usual Suspect, Bio-Dome). Two people, Susanna (Brittany Bristow) and Martinian (Steve Byers, The Man in the High Castle) find themselves shuttling back and forth from the court of Nero to the dudgeon of Peter. Susanna is a court servant of the empress Poppaea (Bobbie Phillips, Showgirls, Murder One). I should mention that Bobbie Phillips is playing probably the most complicated character in this film. At times she is sweet and understanding, but she also enables her husband’s numerous infidelities. Eventually she is downright despicable, which probably makes it OK that she was one of the fully nude showgirls from infamous Hollywood debacle, Showgirls. Martinian is a hardworking and honest Roman soldier who slowly falls in loves with Susanna and becomes a follower of Jesus.

I should stop now and say that this not a very good movie. I say that because most of us have a reasonable standard for what we can accept. We already know the standards have been lowered by making a Biblical movie in northern Canada. The acting is OK and mostly professional. I want to single out one person who stands out for chewing up the scenery. That would be Stephen Baldwin (one of the famous Baldwin brothers) who has been good in movies as long as he plays a mouth-breathing thug or near moronic goofball. In this case he plays a famously ruthless monster who killed somewhere between 100,000 and 1,500,000 people during his reign depending how you interpret history. That was a very healthy number back in those days. Baldwin is very central to this story and plays the part like a mafia mob boss. He looks like a bad hairdresser. The reason I say this is that it is a good example of how details of a production can accumulate and make a movie a disaster. The story also is somewhat unfocused and the production values marginal. So overall, I have to give this a low rating even though everyone involved probably had good intentions.