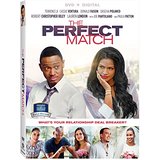 Charlie “Charlie Mac” McIntyre (Terrence “Terrence J” Jenkins) is a modern lothario (not much call for that world nowadays) with a seamless ability to remain romantically unattached to the many women that he meets and sleeps with. Now before you begin to hate him, let me clarify that he is not callous, and he does have scruples. He does not date anyone that shares a connection to any of his circle of friends in order to preserve their friendship. Despite him respecting that relationship, his friends wish for him to reform his ways and settle down, something he has no intention of ever doing. Believing his actions are emotionally unhealthy, his two best friends Rick and Victor (Donald Faison and Robert Christopher) take it upon themselves to propose a bet: he must commit to one person until Victor‘s wedding, in order to prove that a prolonged period of time with one woman will not fundamentally change his perspective on relationships.  Charlie accepts.

Enter Eva (Cassie), a sultry and successful woman that Charlie has a chance encounter with. Now this is where the story takes a turn. She is fully aware of the bet, and at first is not interested in participating but soon changes her mind on one condition: she is not looking for a full-blown commitment, but rather a no-strings-attached relationship. Thinking that is the perfect circumstances for him, Charlie accepts once again. With every encounter their passion and connection grow, leaving one question lingering: are they falling for one another?

Terrence J still has work to do in order to catapult himself as a leading man, but this addition is a nice couple steps forward. He possesses great comedic timing, and there is definitely a charisma about him that shines through with his encounters with his clientele and his family and friends; however, I did find the chemistry between the two leads lacking in some areas. His charm just didn’t really seem to be as prominent as it is in the other scenes. To his defense, that could be because of who he was sharing the screen time with: Cassie. Terrence J truly met his match with this goddess of woman that has been on everyone’s radar since the launching of her first music video. (You all know which one I’m talking about.) It is rare that a musician makes such a smooth transition to film, but I dare say that is what this was. Granted the film does play to her strength, illustrating her exotic beauty and commanding presence, but then again, that is how winners play, right?

Other performances worth mentioning are Faison and Christopher, because without them much of the jokes and camaraderie that make the story work would be missing. These two with Terrence J encompass the title of this film. I know that was intended goal, but at least it is now a fitting title.

This is a sexy story without question. The addition of several passion-inducing and seductive scenes make that fact known quite well. That aside, the film does address some underlying subject as well, such as the importance of morality in the business world in the form of a workplace dilemma which will have our lead having to question his ethics. This is the subject that sets it apart from other films of a similar character and provides it with depth. It is also where we some our best acting from our male lead and helps redeem the character, showing the audience that he is more than a man-hoe (his friend’s words, not mine).

In conclusion, although the comedic portion does outshine the romance section of this romantic comedy, The Perfect Match earns a spot on my list of top movies I’ve reviewed this year. An ideal movie to watch with a special someone. Who knows, you may even get lucky after watching a few of those seduction scenes.

Jeremy Butler is a film school graduate of the International Academy of Design and Technology. He is been writing for Upcomingdiscs since 2012; however, movies have played a big part of his life for much longer. Favorite genres include horror, science fiction/fantasy, and comedy. Favorite movies are V for Vendetta, Boondocks Saints, Kiss Kiss Bang Bang, and The Godfather.
Supergirl: Season 1 (Blu-ray) Jack Irish: The Movies (Blu-ray)