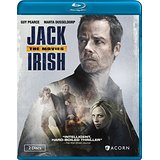 “Who do you think I am? Miss Marple?”

Despite his knack for becoming entangled in byzantine plots and conspiracies, no one would confuse Jack Irish for an Agatha Christie character. Instead, Jack is the creation of novelist Peter Temple, and the character’s rumpled charm and general aversion to violence means he has more in common with Jim Rockford than Hercule Poirot. The character has been adapted for Australian television and brought to life thanks to a winning performance by the great Guy Pearce. You can now get to know Jack yourself since Acorn Media was nice enough to put three Jack Irish TV movies on Blu-ray.

“I don’t practice law much anymore. I live off my wits…gamble…drink.”

Jack Irish (Pearce) is a successful Melbourne lawyer whose life is shattered thanks to a disgruntled client. As a result, he presently works as a debt collector for Harry Strang (Roy Billing), a colorful character who spends his days at the local horse track with right-hand man/muscle Cam Delray (Aaron Pedersen). However, Jack’s past catches up to him when a former client and recent parolee leaves him a frantic phone message…right before he’s killed by the police. Spurred by guilt over the man’s initial conviction, Jack decides to investigate the fishy circumstances surrounding his death and gets caught up in a wide-ranging land development scheme. Along the way, he also meets and falls for journalist Linda Hillier (Marta Dusseldorp).

Bad Debts is based on Temple’s first Jack Irish novel, and the movie does a terrific job establishing the full breadth of Jack’s world. The tragedy in Jack’s life is presented in a quick and effective prologue. And in addition to hitting the track with Harry and Cam, Jack is also fond of hanging out at the Melbourne Bitter, a hole-in-the-wall pub with three old rugby aficionados who seem to be permanently glued to their stools. We also see Jack under the tutelage of cranky cabinet maker Charlie Taub (Vadim Glowna), and in contact with former professional associates, including ex-law partner Drew Greer (Damien Richardson) and slovenly detective Barry Tregear (Shane Jacobson). These scenes are crucial in building the world of Jack Irish, which is driven by character rather than its complex plots.

Speaking of the plot, the land development scheme in Bad Debts is not all that interesting on its own, but it does have a neat resolution that gets unlocked at one of Jack’s shabby hangouts. Pearce, who broke out with American audiences as straight-arrow Ed Exley in L.A. Confidential, goes the opposite route as the disheveled, morally flexible Jack Irish. The actor brings both lightness and legitimate weariness to the role. Bad Debts also establishes Pearce’s dynamite patter with Dusseldorp. Both the actress and the character are Jack’s quick-witted, smart-aleck match.

“Old Bill Irish, eh? I could tell you some tales.”

When Des Connors (Ronald Jacobson), an old rugby teammate of Jack’s late father, shows up wanting help locating his miscreant son, I braced myself for a semi deep dive into Jack’s past. Instead, the job winds up drawing Jack into a conspiracy involving drug smuggling, a shadowy operation called “Black Tide”, and members of the Australian Army (not to mention the CIA, just for good measure). Meanwhile, Harry and his crew contend with a flashy new challenger at the track. More importantly, Linda has accepted a TV news job in Sydney, which has taken her away from Jack.

Maybe it’s my fault for having inaccurate/unrealistic expectations following the movie’s set-up, but as soon as Des showed up I expected some meaningful exploration into Jack’s early life. (Which would’ve been welcome, since Bad Debts quickly thrusts us into tragedy and his present circumstances.) The main plot has some effective jukes involving shady crooks, shadier cops, and the women who love them, but I felt it featured a few too many moving pieces to completely land effectively.

It’s also a bummer to see Jack and Linda apart for so much of the story, though the characters’ on-again/off-again nature means they aren’t permanently separated. (I also appreciate the story establishing that Jack isn’t the only screw-up between the pair.) Despite Linda’s absence, the Black Tide case has dire consequences for someone close to Jack, which is an effective way to bring the case home. Naturally, Pearce and Co. still offer charming performances that are more effective now that we have some familiarity with the characters. Unfortunately, Black Tide is still (easily) my least favorite movie in this collection.

Luckily, I didn’t have to wait long to find my favorite movie in this Blu-ray release. When we catch up with Jack, he’s trimmer and taking better care of himself. Linda is back in Melbourne hosting a radio talk show and continuing her playful banter with Jack. The past comes flooding back in an even bigger way when Jack’s former father-in-law (Barry Humphries) seeks his help with a private manner. The case takes Jack to a swanky private club called The Snug and a red book of potentially damaging secrets, including one that involves Jack’s former in-law, who is also a high-profile judge.

Dead Point simply clicks on all cylinders. The characteristically winding plot here is sexy, relatively simple and (more importantly) connected to Jack’s personal and past lives, which immediately makes it more engaging. (The guest performances in these movies are solid across the board, but Humphries is particularly affecting as a man living with disgrace) Meanwhile, Harry is dealing with his own issues after a trusted associate/betting agent is brutally assaulted. At the other/lighter side of the spectrum…the Melbourne Bitter decides to start serving breakfast with predictably comical results.

Cabinet maker Charlie is conspicuously absent this time around, and I assume the Jack Irish brain trust was trying to find a way work around the 2012 death of actor Vadim Glowna. The climax is the most dangerous and explosive one yet for Jack, who faces his deadliest circumstance yet. By this time, we’re all the way in on the character, his friends, and this entertaining underbelly of Melbourne.

Jack Irish: The Movies is presented in its original aspect ratio of 1.78:1. The 1080i image is arrived at with an AVC MPEG-4 codec at an average of 24 mbps. For a crime drama that inevitably deals with some grim material — an early sequence features a grisly murder-suicide, after all — the Melbourne setting offers a brighter, sunnier palette than you might expect. The result is a surprisingly warm presentation that also offers appropriately inky black levels and nice separation during the (literally) darker aspects of the stories. Fine detail is impressive throughout (the Melbourne Bitter tavern feels particularly lived-in). Not a dazzling visual presentation by any means, but very solid throughout.

The DTS-HD Master Audio 2.0 track is very dialogue-heavy, so the lack of a five-channel presentation isn’t a tragedy. (Though I suspect the various horse races and the air strip finale in Dead Point would’ve gotten a welcome boost from some subwoofer action.) However, the thing this track is asked to do well — deliver clean, intelligible dialogue — is accomplished in a satisfactory way. Heck, even the theme song (Nick Cave & The Bad Seeds’ “Red Right Hand”) receives a potent presentation here.

Jack Irish — Behind the Scenes, Disc 1: (16:52) This is traditional “Making Of” that features cast and crew discussing the challenges of adapting each of Temple’s novels into a 90-minute script. Pearce expresses relief at being able to act in his home country and use his native Aussie accent. There’s also a minor tribute to actor Vadim Glowna (crotchety cabinet maker Charlie), who had died by the time this featurette was made.

Jack Irish — Behind the Scenes, Disc 2: A series of on-the-set vignettes narrated by director Jeffrey Walker. They are each taken from a different Dead Point sequence, and they include The Docks (2:24), Traffic Jam (2:14), and Air Strip Finale (2:49).

Jack Irish: The Movies features all three films on two discs. (Bad Debts and Black Tide are on Disc 1, while Dead Point gets Disc 2 all to itself.)

The movies serve as a highly effective introduction to a character archetype that is very familiar. Fortunately, Pearce’s undeniable charm and some nimble writing make these Jack Irish mysteries something that we’re eager to unravel.

The Perfect Match The Knick: The Complete Second Season (Blu-ray)