Posted in: The Reel World by Archive Authors on August 20th, 2016 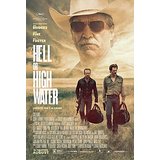 Taylor Sheridan is an actor. Let’s change that. Taylor Sheridan was an actor, and now he’s a writer. He’s a terrific writer. He’s the kind of writer that actors are going to be seeking out and critics are going to love. But he’s also made hard-boiled genre action pieces. He’s coming out of nowhere and getting everything right. He was a series regular on Sons of Anarchy and Veronica Mars, but he’s going to be in much greater demand as a screenwriter. His first film, Sicario, was one of the top ten films of last year, due in large part to his brilliant script (and also to everyone else involved with the movie, like director Dennis Villeneuve and cinematographer Roger Deakins). His new film as a writer is Hell or High Water. Both films demonstrate a clear of understanding of the hardcore action film but also show the deceptively sure undercurrents and perceptive intellectual understanding of the grand scheme that creates the violence in our society.

Two brothers in Texas have had a hard time in life. One, Tanner Howard (Ben Foster, Warcraft, The Finest Hours), has been away in jail for robbing banks. The other, Toby Howard (Chris Pine, The Finest Hours, Star Trek I, II and III) had been taking care of their dying mother. That task is done, because the mother has died, and the family farm is going to be foreclosed on in the coming months. Tanner is the bad brother, but they love each other, and they are both tired of life. Toby joins Tanner in robbing banks because it might be a way to save the banks. Anyone who has seen movies in the last 100 years knows that banks are often the villains in these kinds of movies. They are the giant vultures of society waiting for weakness to take from the poor and struggling. Movies like the Grapes of Wrath and Bonnie and Clyde are famous examples. Does that make bank robbers good people? No, they are criminals, but there is a clear dynamic of muddied morality. This is a cruel, brutal world, and time and time again the only people who survive are those who fight for their lives. Toby is doing it with a clear goal in his mind. He will save the farm for his two sons that he never sees. His ex-wife hates him, but he has nothing else in his life but his kids. He also believes there is oil on the land, and his sons will have the life he never had if he can find it. So they go on a bank-robbing spree.

Sherriff Marcus Hamilton (Jeff Bridges) is getting ready to retire. He has a few months left, and then this banking robbing spree disturbs and excites the quiet of his life. Jeff Bridges has increasingly turned to his take on the iconic western lawman in numerous recent films. This is certainly a capper on his ornery modern and wistful Texas Ranger. The film bears many similarities to the Best Picture Oscar winner No Country for Old Men. Both films are meditations on our violent past and the hidden violence of the modern age.