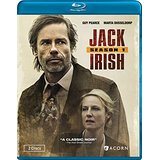 “He’s just got a knack for being in the wrong spot at exactly the right time.”

Jack Irish, the disheveled former lawyer-turned-debt collector with a nose for trouble, is at it again. The character is the creation of novelist Peter Temple, but Australian TV audiences got to know Jack thanks to a trio of TV movies starring the great Guy Pearce. The movies were successful enough that Jack Irish returned as a six-episode series that brings the entire gang back together.

“My car’s been stolen, I lost a client, and now they’re trying to pin a murder on me.”

The fact that all of these things happen to Jack (Pearce) by the end of the series’ first hour tells you that our reluctant hero is in for a rough time. After being a paid a too-good-to-be-true amount of money to find a client’s ne’er do well adopted brother, Jack finds his target…but the brother is killed in front of Jack’s eyes. For extra fun, Jack is framed for the murder. As he works to clear his name, Jack becomes involved with Sarah (Claudia Karvan), a troubled sculptor who believes Jack can help find her missing sister Tina (Brooke Satchwell). Tina was involved with a powerful mega-church called Way of the Cross, which is headlined by charismatic pastor Rob Shand (Marcus Graham) and has tremendous influence that extends all the way to the Phillipines.

“You don’t have a career, Jack. You hardly have a life.”

And it just so happens that Jack’s on-again/off-again journalist girlfriend Linda Hillier (Marta Dusseldorp) has just been sent to work in Manila as a correspondent. The two part ways early on in the first episode, but their paths cross a couple of times as the case Jack is investigating and the story Linda is chasing become entangled. Meanwhile, Jack’s horse trainer employer Harry Strang (Roy Billing) and Harry’s right-hand-man Cam (Aaron Pedersen) embark on a scheme involving a long-lost racehorse and Jack becoming a reluctant horse owner. The stuck-in-time Melbourne Bitter pub Jack frequents has introduced (much to Jack’s horror) Chinese tapas, and its owner has jumped into the world of online dating. Finally, Jack’s cabinet making mentor Charlie (David Ritchie) is as cranky as ever, especially since he seems to quietly be having money troubles. (That being said, we do shockingly see the softer side of Charlie when he meets the new woman in Jack’s life.)

“Admit it…you’re too gutless to break away from your petty world of old men and footy.”

While the three Jack Irish telemovies were based on novels of the same name — Bad Debts, Black Tide, and Dead Point — this six-episode story largely appears to be an original creation. (FYI: there is a fourth Jack Irish novel out there called “White Dog.”) On top of that, a trio of directors — Kieran Darcy-Smith, Mark Joffe, and Daniel Nettheim — have stepped in for Jeffrey Walker, who helmed each of the three TV movies. That being said, the tone and presentation of the series is consistent with that of the movies, which will please fans of the latter. (Like me.)

It just so happens that close-ended, limited-run TV series are in vogue now, so a six-episode Jack Irish story makes perfect sense. The expanded format — six hours vs. a 90-minute telemovie — allows for some of the characters on the margins to shine. That’s important because, despite its convoluted conspiracies, Jack Irish is driven by character. As a result, Shane Jacobson’s slovenly, morally questionable Detective Barry Tregear gets in hot water for helping Jack out of his latest pinch, and we get to see different dimensions of the character as Tregear works to wiggle free. On a lighter note, Jack’s former law partner Drew Greer (Damien Richardson) and computer-savvy/unlucky-in-love ally Simone (Kate Atkinson) each score laughs with their expanded screen time.

The longer format also means that Jack and Linda are essentially starring in their own TV shows. On one hand, this serves as a great showcase for Dusseldorp, who goes through an emotional roller coaster as she navigates a strange land and slowly and affectingly bonds with disengaged bureau chief Orton (Jacek Koman). Then again, it also means the viewers are asked to care about and track two separate webs of corporate and government wrongdoing. Don’t get me wrong, I can handle complex (even dense) storytelling, but for me the plots are easily the weakest, least engaging part of every Jack Irish story…and the TV series essentially doubles that up. (Not to mention that it’s a little too convenient that Jack and Linda’s cases happen to be intertwined.)

Still, everything here remains immensely watchable thanks to a cast hitting on all cylinders. Pearce has been one of my favorite actors for a long time, so it’s great seeing a showcase for his talent and effortless charm. Although Jack generally keeps a smartass, sarcastic detachment, the character goes to some dark places after the events of the explosive fourth episode. The rest of the cast is just as good, with Billing providing additional comic relief thanks to Harry’s strict house rules when Jack is forced to crash at his place.

On a sadder note, the series is dedicated to David Ritchie, who died shortly after filming was completed. These episodes represented Ritchie’s debut as Charlie; the actor had replaced Vadim Glowna, who played Charlie in two of the TV movies before Glowna himself died. At the risk of sounding flippant, I’d be worried about accepting the role of Charlie if they decide to make more of these. (It might be the real-life equivalent of Spinal Tap’s drummer.) That being said, I hope they make more of these.

Jack Irish: Season 1 is presented in its original aspect ratio of 1.78:1. The 1080p image is arrived at with an AVC MPEG-4 codec at an average of 25 mbps. Just like the movies that preceded this six-episode series, the Melbourne setting offers a brighter palette than we usually get with grim crime dramas. The season’s regular forays to Manila bring more sunny scenery, and these sequences have a somewhat golden tint to further distinguish them. Fine detail — from flecks of dust in the air inside a coffee shop to Jack’s ever-present stubble — is impressive throughout. In fact, the only visual misstep is a thoroughly unconvincing explosion at the end of Ep. 4, but I chalk that up to the limitations of a TV budget rather than any deficiency from this disc.

The DTS-HD Master Audio 5.1 track is an improvement over the two-channel track offered on the Jack Irish: The Movies Blu-ray release. This is immediately evident during the season’s opening scene in a jungle, when the rumble of thunder is felt throughout the sound field thanks to activity in the subs. There aren’t that many horse racing scenes, but the ones we do get feel larger in scale because of the crowd noise in all the channels and the galloping coming from the subwoofers. There’s also a harrowing assault in Ep. 4 that sprays automatic rifle fire all over a hotel swimming pool and (thanks to impressive directionality) all over the speakers. All that being said, this is still a fairly dialogue-heavy presentation. Fortunately, this track also succeeds on that front.

Jack Irish: Season 1 features all six episodes on two discs. After a strong introduction in the TV movies, this miniseries keeps the character’s winning streak intact. The attitude and presentation of Jack Irish is familiar, but it’s given an invigorating spin thanks to a fresh (for American audiences) setting and a winning cast of characters. Check it out if you’re looking for a funny, engaging neo-noir detective story.