Posted in: No Huddle by Brent Lorentson on August 24th, 2016 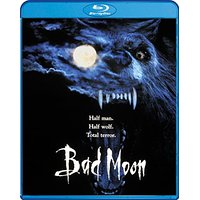 I think for the most part we can all agree that the 90’s were not so kind to horror fans.  Sure, you can find a few gems sprinkled throughout the decade, but as a whole the theater was not where you’d find the good stuff.  In the 90’s you’d end up having to go to your local video store to check out the straight-to-video titles and the independent films  that had just been released.  Unless you lived in LA or New York, there were so many titles you’d be missing out on, but the video store brought films like Carnosaur (1993) to your attention.  This was pretty much how I first stumbled upon Bad Moon, while cruising the titles in the horror section and this cool box art called out to me.  I never heard of the film, but I recognized the writer/director Eric Red as the guy who wrote Near Dark (for the longest time my favorite vampire film), so I just had to rent this.  At the time I had only known of two werewolf films that I had really enjoyed, and they were the staples An American Werewolf in London and The Howling.  Now, nearly two decades later, I’m getting to write up the review of the new Scream Factory release.

As much as the film is about a werewolf and it terrifying a single mother and her child, I really see this more as a story about the bond between a boy and his dog. Brett (Mason Gamble) is just a young boy who doesn’t seem to have many friends, but what he does have is Thor, his loyal canine companion that is a large German Shepherd.  The dog isn’t simply just the family pet but genuinely is part of the family and sees himself as its protector; what’s kind of amazing is how we can see this through Thor’s actions. While the story doesn’t allow for this to have the heart that many ‘boy and his dog’ films do, the relationship is still well established.

The horror element of the film is around Uncle Ted (Michael Pare), who is viciously attacked by a werewolf at the start of the film.  For horror fans, I don’t have to spell out for you what it means when you survive a werewolf attack, but Bad Moon at least gives us a few fresh twists on the lore, my favorite being that he can change any night, not just on full moons.  With a trail of bodies around him and his sister Janet (Mariel Hemingway) oblivious to her brothers condition, she welcomes him to stay at her home, at least till the police can find and kill whatever has been hunting hikers in the area.

This is where we see the transition in Thor, and when his need to protect kicks in he can sense Ted is a predator, but of course everyone just wants to believe it’s something else.  As the two males square off with one another imposing their dominance, you know this will only escalate in a bad way, but you also hope that possibly there is something that can be done to save Ted and keep this family together.

The wolf design is great; it’s a man in a suit, and despite the limited range of facial expressions the creature can make, I still will take this look over CGI.  While the film doesn’t boast the highest body count, when the kills and attacks occur, they are vicious and bloody.  While this may have been shot with a conservative budget, there is enough style and substance injected into the film to present a fun little creature feature.  It may not stand tall with the classics of the genre, but it is still a worthy entry.

Scream Factory did a great job with polishing up the film and presenting a nice little Blu-ray.  We get both the theatrical cut and the director’s cut of the film. The commentary track with Eric Red is great; so much information about the film and other topics that fans of the director or the film will definitely appreciate.  There are several interviews on the disc as well, personally the time spent with the Special Effects Makeup Artist Steve Johnson and Stunt Coordinator Ken Kirzinger were great and a fond reminder as to why practical effects are always superior to CGI.

This new Blu-ray release from Scream Factory is a fun little blast from the past that comes just in time for the Halloween season if you are looking for titles for some late-night movie marathons. If you’re a fan of the genre and Bad Moon has somehow passed you by, give this one a shot, and I think you’ll be surprised at how much fun you’ll actually have with it.

Brent Lorentson is a horror writer and film critic based out of Tampa, Florida. With a BA in Digital Film, he co-wrote and co-directed Scavenger Hunt. His short stories have appeared in various horror anthologies. In 2019 his short script Fertile Blood will be a part of the anthology horror film Slumber Party. He is currently working on his first novel A Dark and Secret Place set to be released in late 2019. Favorite Films: Taxi Driver, Fight Club, I Saw the Devil, The Wild Bunch, Dawn of the Dead, A Clockwork Orange, Pulp Fiction, Heathers, The Monster Squad, and High Fidelity.
Tuesday Round Up: August 23, 2016 Ash vs Evil Dead – The Complete First Season (Blu-ray)