Posted in: Disc Reviews by Brent Lorentson on August 24th, 2016 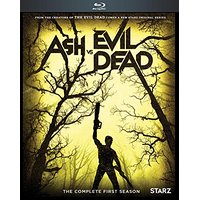 For years (at this point we can say decades), fans have been holding out hope for a new installment in the Evil Dead franchise. Over the years there have been rumors of a fourth film, even talks of doing a crossover involving Ash (Bruce Campbell) taking on various horror icons.  In the end these talks seemed to be nothing more than pipe dreams, but then in 2013 something special happened.  A remake/sequel occurred for the series that actually was pretty awesome and gory while also being a financial success…but it was the stinger at the end of the credits that got people excited, the brief appearance of the man with the chainsaw hand himself.  Was it a tease for more to come, or was it simply a wink to the fans of the series?  As it would turn out, a little bit of both.  It’s a fanboy’s dream come true, not just a continuation of the Evil Dead series, but Starz delivers a 10-episode season that packs a gore-soaked punch to my heart.

When we catch up with Ash, he’s pretty much the same as when we last saw him.  He’s a man stuck at a dead-end job and living in a trailer park, but this is the lifestyle choice he’s made on his own.  He remains haunted by his past battles with The Book of the Dead and of course the deadites, but in true Ash fashion he copes with it through alcohol and easy women.  It’s at his job that he meets Pablo (Ray Santiago) and Kelly (Dana De Lorenzo) who reluctantly find themselves mixed up with Ash and the return of the evil that seeks to be reunited with the Necronomicon.

For those of you who read that and are scratching your head wondering what all that means, well, I’d recommend checking out the first three movies before jumping into the series.  While it may not be required to appreciate the show, seeing the previous films does benefit the viewing experience since after all the events of the series do follow the events in the film.  Flashbacks are tossed into the episodes, but let’s face it, you’re only doing yourself a disservice by skipping past the films.

What separates this from the first three films is that the first season plays out more as a long road film. The series opener, “El Jefe”, is helmed by Sam Raimi, who seems to slide back into his world of the Evil Dead with ease, quickly recapturing the tone and style he established over 30 years ago.  For those worried that perhaps being a television series would compromise the integrity of the show in any way, well, they don’t skimp on the blood and gore; the TV-MA rating is well earned here.

Factoring Pablo and Kelly into the store is a move to help draw in a younger and fresher audience, and that’s fine, because it helps give plenty of material for the writers to give Ash to play off of.  Pablo seems to be along for the ride out of loyalty to Ash and his high hopes of winning the heart of Kelly, while Kelly is on board to avenge the death of her family.  Ash can easily relate to these two as he takes on the role of their protector, but of course the two manage to show they have talents to help Ash out along his way to destroy the book.

With a pile of bodies piling up at every stop, Ash and his crew are being pursued by Amanda Fisher (Jill Marie Jones), a cop on leave after her confrontation with some deadites, and Ruby (Lucy Lawless), a mysterious woman with her own agenda in finding the book.  These women bring an extra layer to the show that gives the audience some insight into what people in the outside world would see while confronting the aftermath of the battles Ash faces, but also it raises the stakes as the Evil seems to be spreading across the world at a faster rate than we’ve seen before, and there are some dangerous people in the world who have some nasty plans with the book.

The long, bloody road trip leads Ash and his companions to a familiar destination, and I honestly couldn’t have been smiling any wider when they arrived.  To say more would spoil the fun.

Each episode offers up its fair share of violence and gore while also delivering some great character development.  Everything seems to blend so well here, as we see a great blend of practical and CGI effects that fit seamlessly into the sequences.  But it’s not just about the gore; the show is actually pretty funny as well.  Sure, we get the staple vaudeville, The Three Stooges kind of physical comedy, but also there is the loaded sarcasm that comes along with Ash’s charm.

The 30-minute runtime is just right for this show, giving enough laughs and horror to keep us wanting more.  While this sadly won’t be getting nominations for best comedy, this is a production that achieves so much and delivers the kind of product fans will simply eat up.

Ash Vs Evil Dead is presented in the aspect ratio 1.78:1.  The 1080p image is arrived at with an AVC MPEG-4 codec at an average of 28 mbps.  This is a great looking show.  The picture is sharp throughout, and plenty of detail is captured here. The use of over-lighting helps with capturing some of the detail in the darker scenes, but it’s the added grain to the night shots that help give us the 16-mm-film feel that we got in the first film.  The skin tones are all natural, and the blood runs thick and red.  There are no compression issues; this is a pretty great-looking release.

The True HD 7.1 track is bliss.  Now, I’m only set up with a five-speaker spread, and the experience was still pretty impressive, but a friend of mine pointed out he had a seven-speaker setup, so I head over to check this out with him.  After I picked my jaw up off the ground, this was an amazing mix. The bass is heavily utilized, but the moment where I truly appreciated the speaker spread was when The Evil first comes through the woods.  It’s a mixture of haunting and creepy with a splash of a cartoonish environment, which is basically what the show is.  When the chainsaw revs up and we see Ash go into action with the music cues, the speakers are all utilized; it’s great.

Audio Commentary: Each episode comes with its own commentary track with the directors and stars of the show. The people on the tracks vary per episode, but each track is fun and insightful.  Campbell and Raimi manage to carry the tracks they are on and are just a blast to listen to if you’re fans of the films or just of the individuals.

Inside the World of Ash vs Evil Dead: (15:59) An episode by episode synopsis with a quick interview segment and some BTS footage of a key moment in the episode.

How to Kill a Deadite: (2.31) Pretty much a quick question to the cast about how they feel is the best method to kill a deadite.

Best of Ash: (1:27) A collection of clips with Ash saying something funny or killing a deadite.

Kind of a lackluster selection of bonus material considering the quality of everything else on the two discs.

While it’s not a fourth film, what we got I feel is something so much better.  As a fan of the series, I’m over the moon with this series, and it is one of my top shows of the year.  While I understand people will disagree, I simply want to point out how this is the little show that pulled off something big. It managed to meet expectations I honestly didn’t feel it could live up to.  Evil Dead 2 is one of my all-time favorite horror films that I’ve watched every year since I was a teenager.  The show isn’t scary, nor is it depressing like certain other horror shows that seem to have a rabid fan base. Ash vs Evil Dead remembers that horror is escapism and is the kind of over-the-top fun that gets us to forget real world drama for at least 30 minutes.  If you’re not a fan of the films, you’d better skip this, but if you are a fan, then prepare to have a good time.

Brent Lorentson is a horror writer and film critic based out of Tampa, Florida. With a BA in Digital Film, he co-wrote and co-directed Scavenger Hunt. His short stories have appeared in various horror anthologies. In 2019 his short script Fertile Blood will be a part of the anthology horror film Slumber Party. He is currently working on his first novel A Dark and Secret Place set to be released in late 2019. Favorite Films: Taxi Driver, Fight Club, I Saw the Devil, The Wild Bunch, Dawn of the Dead, A Clockwork Orange, Pulp Fiction, Heathers, The Monster Squad, and High Fidelity.
Bad Moon (Blu-ray) The Huntsman: Winter’s War (UHD Blu-ray) (4K)