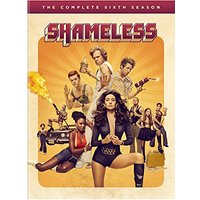 You think your home life is screwed up? I can almost promise you that the Gallagher family has you beat in spades. If not, perhaps watching them will help you feel better about your situation. Fiona, Lip, Ian, Debbie, Carl, Liam, and of course Frank are back with Season Six of Shameless, and it’s like they never left. That is the good thing about the series; it always feels like you can pick up right where you left off despite the several-month hiatus. This year is filled plenty of the same antics you are used to seeing by one of my favorite dysfunctional families, including illegal marriages, teenage pregnancy, and criminal mischief. After indulging in Season Six, the only thing you can say is in the words of Steve Howey, “F$8#ing Gallaghers.”

Thirty-second recap of last season: Fiona did a prison stint and almost lost custody (not to mention of the respect) of the family after becoming addicted to cocaine, and Liam almost died of an accidental overdose after getting into her stash. Lip continued to enjoyed campus life, eventually meeting and falling in love with one of his married professors (Sasha Alexander). Ian suffers a nervous breakdown and finally comes to grips with his bipolar condition. Debbie decides that she wants to have a baby with her boyfriend and goes about accomplishing her goal. Carl embraces his inner hoodlum, engages in drug running, and ends up being sent upstate. Finally, Frank finds love in the form of a terminally ill doctor who decides to go out on a bender. OK, all caught up; did it take longer than thirty seconds?

Season Six maintains the momentum previously established in the previous years. The show is not much for overarching storylines, keeping situations to a mostly episode-to-episode basis (the equivalent of day-to-day) which I feel makes it very relatable and engaging. They are not superheroes looking to save the world or stop a crisis. Their crisis is the everyday circumstances that are thrusted upon them, usually by Frank. Their longevity and the commitment that they share with one another is the best part of the show, because even though they do not always see eye to eye and may be feuding with one another, it is always established that it comes from a place of love.

Another theme that is pivotal for every season is that one member of the family must face a crisis that forces them to take a long and hard look at themselves and question the choices that brought them to this moment. Last year it was Fiona; this year it is Lip, and if I’m being honest, I think I prefer his scenario, because there is nothing so tragic about watching someone with his potential and ability fall from grace. Jeremy Allen White plays it for all it’s worth, too. I’m not even sure what I liked more, watching him spiral out of control or his pained expression when he realizes how close he is getting to acting like another degenerate member of his family.

The season isn’t all doom and gloom; after all, this Shameless, and you need to laugh, which begins with the episode recap with a cameo from a member of cast ridiculing you for missing the previous week’s episode. Frank is a resident comedian on the show without even intending to be funny. You can’t help but laugh at his audacity in believing that he is the unjust victim of the Gallagher family’s disdain when he’s not transplanting himself in his family’s lives such as teaching Debbie how to survive off the government or replacing drugs with baby laxative. Another source of entertainment is the antics of neighbors Kev and Veronica, who find themselves in strange new waters when it comes to their relationship.

Memorable episodes: I Only Miss Her When I’m Breathing, Refugees, Be a Good Boy. Come For Grandma, and Familia Supra Gallegorious Omnia.

Jeremy Butler is a film school graduate of the International Academy of Design and Technology. He is been writing for Upcomingdiscs since 2012; however, movies have played a big part of his life for much longer. Favorite genres include horror, science fiction/fantasy, and comedy. Favorite movies are V for Vendetta, Boondocks Saints, Kiss Kiss Bang Bang, and The Godfather.
Tuesday Round Up: Aug. 30, 2016 The First Monday in May