The First Monday in May

Posted in: No Huddle by Archive Authors on August 31st, 2016 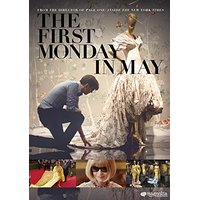 The First Monday in May is a documentary that traverses many worlds. It caters to mass culture but also explores the inner sanctums of high art. What is art? This is one of the questions the movie asks. In this case, it examines the ignored stepchild of high art, which is fashion and costume design. The Costume Institute of the Metropolitan Museum of Art languished in the basement for many years, never truly respected. Something called the Met Gala has changed all that. It is one of the most important social events of the New York City social scene. The invitation list is ruthlessly trimmed every year to only include the most glamorous and relevant celebrities. It is also one of the biggest fundraising events that the museum has. This movie is full of celebrity faces and the inside world of the likes of Lady Gaga, Cher, Jennifer Lawrence, George Clooney, Bradley Cooper, Rihanna, Beyonce, Jessica Chastain, Kim and Kanye, Anne Hathaway, Katy Perry, the Olson twins, Helen Mirren, Larry David, Miley Cyrus, Selena Gomez, and on and on  and on and on. It is definitely a place to be seen, and only in the very finest fashion statements possible. But the Met Gala has a purpose, and that is to bring respect to a part of the culture that is not seen as true art. The superstar editor of Vogue, Anna Wintour, is the powerhouse behind the event. The other half of the equation is Andrew Bolton, who is the current head of the Metropolitan Museum of Art’s Costume Institute. The beginning of the movie covers the enormous success that Bolton had with the Savage Beauty exhibition in 2011. It was a tribute to the work of Alexander McQueen, who had hung himself in 2010. It was such a success that it was an albatross around Bolton’s neck as he tried to mount an exhibition that could possibly top it.

The First Monday in May spends much of its time following Bolton around the world as he prepares a massive new exhibit, China: Through The Looking Glass. It also follows Wintour as she presides over the massive job of both running Vogue and supervising the “Super Bowl” of the social season. Two superstar directors are also brought in, Baz Luhrmann (Moulin Rouge) to consult on the Gala, and Kar-Wai Wong (In The Mood For Love) to consult on the exhibit. There are probably more big names in this movie than any other movie you are likely to see, but in situations that would be considered behind the velvet rope.

I was impressed overall with the amount of secret knowledge of the fashion world, the magazine world, and the world of high art. Both of Savage Beauty and China: Through the Looking Glass are among the most successful exhibits of all time, generating huge streams of income. I hope that isn’t a spoiler, because so much of the movie is devoted the enormous amount of work producing such exhibits. The film also clearly shows that these exhibits were successful because they were not afraid of soliciting the biggest names in the mass culture to get some respect. Still, the exhibit about China was especially brave in navigating through cultural stereotypes and political controversies, which only made the exhibit more intellectually vibrant. The First Monday In May was a revelation in general.