Posted in: No Huddle by Gino Sassani on September 1st, 2016 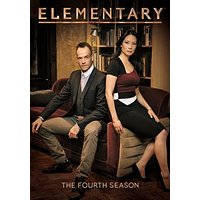 Modernizing Sherlock Holmes has been a popular trend in film and television lately. We have seen two slick action film adaptations courtesy of Guy Ritchie, a contemporary BBC adaptation (Sherlock), and now there is Elementary, which transplants Sherlock Holmes and his loyal companion Watson from Victorian Era England to modern New York. We might be a long way from Doyle here, but the possibilities are very intriguing. This is the season that Elementary really finds its legs.

The season begins with Sherlock falling off the wagon once again. It started at the end of Season 3, and now there are the consequences. He’s beaten the crap out of a guy, and he’s kind of out of control. So he’s back in recovery. What he doesn’t need is more stress. Along comes Dad, who is so wickedly and perfectly cast to be John Noble. This was teased as the last season ended, and it’s a casting that brings up the level of this season immediately. Morland Holmes is every bit of the enigma his son is. You never quite know if he’s a good guy or a bad guy. He’s charming, but he’s holding dark secrets. While Sherlock doesn’t want to be bothered, Morland is his ticket back to working with the police force. The man has some juice. Of course, like all deals with devils, that favor comes at a price. It doesn’t help that Holmes believes his father might be a killer. On the brighter side Holmes might have made a bit of an emotional connection with Fiona, and that struggle puts a nice evolutionary moment on the character. The arrival of Dad also means the revelation of who his mother is.

As for Watson, she puts herself in the role of Holmes’ protector. She helps to bring the clues Holmes needs to decide if his father is a killer or victim when Morland’s lover is murdered. Watson takes a case from Morland without Holmes knowing. She’s searching for a mole in his company. This is one of those lazy plot devices used on almost every detective/agency series out there. I have to say that there are some twists here that keep this quite interesting. It also leads to discoveries that Morland would rather remain undiscovered. Watson also discovers that she has a sister and all the sibling rivalry that entails. They have a kind of love/hate thing going on.

There’s an episode with a kooky costumed hero who sees himself a character out of the comics. We also meet the famous Henry Baskerville, and we all know how his story turns out. The season ends with a chilling new bad guy who wants to see Moreland dead. The team realizes that they didn’t take the threat seriously enough until it’s too late. Without revealing any spoilers, you can be sure the price is going to be steep here. It’s by far the most exciting season finale of the series to date. You get all 24 episodes along with some extras. There’s the traditional 30-minute season summary, a gag reel, a feature on the season’s villains, and a profile on John Noble/Morland Holmes. The show still has legs, and it’s the sleeper hit of the network. Plenty of places left to go. Anything can happen here. “There is a vast gulf between ‘impossible’ and ‘impossible to imagine’”.

Gino Sassani is a member of the Southeastern Film Critic's Association (SEFCA). He is a film and television critic based in Tampa, Florida. He's also the Senior Editor here at Upcomingdiscs. Gino started reviewing films in the early 1990's as a segment of his local television show Focus. He's an award-winning recording artist for Omega Records. Gino is currently working on his 8th album Merchants & Mercenaries. Gino took over Upcomingdiscs Dec 1, 2008. He works out of a home theater he calls The Reel World. Favorite films: The Godfather, The Godfather Part II, The Body Snatcher (Val Lewton film with Karloff and Lugosi, not the pod people film), Unforgiven, Gladiator, The Lion King, Jaws, Son Of Frankenstein, The Good, The Bad And The Ugly, and Monsters, Inc.
DC’s Legends of Tomorrow: Season 1 (Blu-ray) Clown (Blu-ray)