Posted in: Disc Reviews by Brent Lorentson on September 1st, 2016 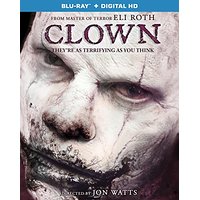 I wouldn’t go so far as to say that I have a fear of clowns, but more of the people beneath the paint. I’m not sure if anyone has recently seen in the news, but there are reports of people dressing up as clowns behind an apartment complex in South Carolina attempting to lure children into the woods.  First off I immediately think this is a prank, but also there is the side of me that is curious as to there being something more sinister at play; after all, it seems like a good start to a horror film. Going back through my childhood, I can’t think of any one moment that caused me to despise clowns, but I do remember a trip to Circus World that left me convinced all the clowns there were bad.  Yes, I know this fear/hatred is unwarranted if not an overdramatic response from my imagination; after all, I do have an extreme phobia of the Amish that I have trouble coming to terms with.  So when Clown was up for grabs to review, I figured this could be a fun experience to sort of face my fear. Well, let me just say (gulp) it didn’t work out so well.

Kent (Andy Powers) is a dad who just wants to see his son have a happy birthday, so when the clown scheduled to appear at the party fails to show up, Kent decides to improvise.  After finding an old clown suit that was hidden inside his new home, he does what any dad would do to save the day.  He suits up and puts on a show for the kids.  Just one tiny problem; after the show when he attempts to take off the suit, it won’t budge.  At first family and friends just believe this is no more than a silly joke, that is until Kent asks his wife, Meg (Laura Allen) to help with removing the suit.  Already Kent has accumulated a series of injuries while using several sharp instruments to remove the suit, but when Meg ends up ripping off the tip of his nose when attempting to remove the red ball at the end, well, things only grow more intense from here on.

While we watch Kent go through this transformation of the suit becoming a second skin, it’s hard to not notice the similarities the film has with The Fly, or many of the body horror films of David Cronenberg.  Things continue to only get worse when Meg finds the former owner of the suit and an old book filled with information about the early origin of the clown. Not to spoil anything, but really creepy stuff.  But when it’s revealed what the costume really is, the film starts to shift its tone and no longer goes for dark jokes but instead becomes the thing children’s nightmares of made of. Kent slowly is changing into a monstrosity that survives to feed on children, and let me just say that the film isn’t afraid to claim the lives of its young cast members.

With a healthy mix of practical and CGI FX, the film offers up some pretty nasty visuals.  But what takes away from the genuine creepiness of the film and its scares is the reliance the film puts on jump scares.  I’m fine with the notion of a character jumping out from a dark corner, but when you need an overly loud sound cue to get a jump out of you, this just feels cheap. What makes it worse is that it is the same stinger we hear over and over, and it just frustrates me, because I feel the scenes don’t need it to get the scares they are looking for.

I’ll admit the first third of the film just really did nothing for me, and it did have me worried that this film would turn out to be a misfire.  But the moment Kent shows up at the home of a kid who bullies his son, things quickly ramp up and it just becomes an awesome horror flick.  I’m trying to be vague on many aspects of the film simply because there are some really unique and fearless moments in the film.  With the mythology set up there is plenty of room for a sequel, if not a long-standing franchise with this idea.  This Eli Roth-produced film has so much untapped potential I’d love to see the next step this film can take.

Clown is presented in the aspect ratio 2.40:1.  The 1080p image is arrived at with an AVC MPEG-4 codec at an average of 18 mbps.  If I have one complaint that stands out from the rest, it is that this film looks really flat; the locations never have any depth, and to a degree that ruins some of the atmosphere.  I’d blame this on having a smaller budget and not having fancier camera equipment possibly.  With the flatness we get the loss of detail, which would have been more effective when explaining what the clown suit really is.  The film also seems to be really stripped down of color, and as the film progresses the saturation levels get to the point where the film is almost black and white.  This is clearly an intentional choice, but I’m not sure I agree with it.  There is a moment when the film goes to a Chuck e Cheese and there could have been a moment to show some contrast, but even this had dull coloring.  While I didn’t see any artifacts, there were some times where the blacks seem to crush slightly, but nothing distracting.

The DTS-HD Master Audio 5.1 track is a unique one.  The dialog in the film is centered from the front speakers, but it’s the unsettling music score along with the use of bladed weapons and electric tools that really keeps this film in the land of creepy.  I mentioned above about the use of stingers for the jump scares, but for me it was the creepy children’s music that got under my skin.  It’s innocent and fun for kids, but in this setting it is unsettling. Good job to whoever found the music.

Making Clown: (6:24) Here we have a brief look at how the film came to life, from a clever fake to trailer and Eli Roth’s reaction to it.  We also get a quick look at some of the practical FX magic that went into making the film.

Though I don’t foresee the film reaching immediate cult status, it will have a solid fan base, and I do hope that we can get some sequels out of this film.  With Halloween just around the corner, this is the kind of film that can help get you in the mood, the kind of film to show others who find it amusing that you have a phobia of clowns. As I said, the film does have a weak start, but if you hang in there, it does deliver some good scares.

Brent Lorentson is a horror writer and film critic based out of Tampa, Florida. With a BA in Digital Film, he co-wrote and co-directed Scavenger Hunt. His short stories have appeared in various horror anthologies. In 2019 his short script Fertile Blood will be a part of the anthology horror film Slumber Party. He is currently working on his first novel A Dark and Secret Place set to be released in late 2019. Favorite Films: Taxi Driver, Fight Club, I Saw the Devil, The Wild Bunch, Dawn of the Dead, A Clockwork Orange, Pulp Fiction, Heathers, The Monster Squad, and High Fidelity.
Elementary: Season 4 Exclusive Interview With Scarlet Red From All American Bikini Car Wash