Posted in: No Huddle by Dan Holland on September 3rd, 2016 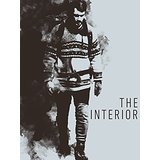 I have seen an incredible number of independent horror films that are either shot in or around the woods. The setting makes sense for budget purposes: you are able to create a mysterious, brooding atmosphere for absolutely no cost. These films were produced even before The Blair Witch Project made the aesthetic popular in 1999. Even I hear the call of the woods as an amateur filmmaker, but I’m careful not to give into temptation and create a guaranteed flop just so that I can have a film set “in the woods.” I may seem pessimistic, but I have been disappointed by too many of these films to understand that it is not just being “in the woods” that makes the film. For these films to succeed, you need excellent writing and an unsettling/uncanny presence of which to be afraid. As is the case with The Interior.

The film tells the story of James, a young man who recently learns he has an undisclosed, and assumed fatal, illness. In an effort to cope with this news, James shifts careers from office to manual labor, but to no avail. He finally decides to journey into the interior of British Columbia, where he begins living off of minimal supplies in a true outdoorsman fashion. However, it is not long before James begins to feel the anxieties of being alone trickle into terror, as he is soon tormented by a sickly-looking man wearing a red jacket.

The Interior is the most impressive first film of any director I have seen to date. Written and directed by Trevor Juras, this film has the right amount of comedy, a wonderful tension that builds slowly, and very creepy, unnerving scenes that would make David Lynch proud. What brings all these elements into a cohesive whole is the pacing and execution of each scene. While each shot may seem to linger at times, I found that every second of the film was severely deliberate, and that is hard to pull off as a first timer. The comedic portions towards the beginning of the film are paced slowly, but this serves two purposes: To introduce the character’s attitudes and habits, and also to establish the speed of the film for its viewers. By providing quality entertainment during the slow portions of the film, Juras brings our attention away from the pacing, which is important for an indie film.

James is played by Patrick McFadden, who fits the part so well. From causing trouble with his boss to screaming in terror and confusion over the man in the red jacket, McFadden demonstrates quite a bit of range throughout the film. Even though I really did enjoy McFadden’s performances throughout, I really must say that it is ultimately a combination of the atmosphere created by Juras and McFadden’s reaction to said atmosphere that earned the film a four from me. There are several scenes where you must watch the tent bend inward as what looks like a hand is reaching through the tent towards James (à la Polanski’s Repulsion). This is terrifying in and of itself, but watching McFadden’s reaction clues you into his character’s uncertainty of his own mortality. There is nothing that can prepare you for the eeriness of those scenes, and the film does not stop at having James just out of reach of the impending terror.

If first impressions are the ones that last, I cannot wait to see new films from Trevor Juras in the future. Very rarely do I find that two genres mix well into one movie, especially horror and comedy. Juras managed to mix water with oil on his first try. The Interior is like a slow, midnight walk through an abandoned house with your friends: it begins as a fun venture, but slowly you become terrified and regret ever having stepped foot inside (yet you are afraid to admit it). The horror in this film is delivered only through complete immersion into this film’s atmosphere.