Posted in: No Huddle by Gino Sassani on September 6th, 2016 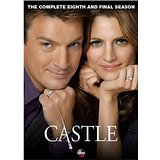 “I mean the guy’s abducted, like what, twice a year? I think that’s a tad above the national average.”

After eight long seasons, the book on Richard Castle has finally come to a close. It started when Stana Katic decided that she was leaving the show after the eighth season. That did not spell doom for the show immediately, and honestly it shouldn’t have. It was obvious in the first couple of episodes that the powers that be were experimenting with a new look to the show, and I thought it was actually a pretty good idea. More on the new look later. The Beckett character is not essential to the success of the show, and it never was. With all due respect to all of the trendy “ship” fans out there, this series was much more than the romantic relationship. And I believe the early season proves the point, if only someone in power was paying attention.

Rick Castle (Fillion) is a very successful mystery pulp-fiction writer with over 26 books hitting the bestseller list. He’s rich, and he’s spoiled. He lives with his mother (Sullivan), who is pretty much a has-been actress who thinks she’s just one part away from stardom. He has a daughter (Quinn) who is more responsible than he is. After having so much fun and inspiration tracking down his fictional copycat killer, he decided to pull strings and become an unpaid consultant for the team. At first that wasn’t so good for team leader Detective Kate Beckett (Katic). Of course, now the whole sexual tension thing has been discarded, and they are an official couple these days and married. The team is also filled by a pair of detectives. Detective Javier Esposito is played by Jon Huertas and is the macho member of the team. Detective Kevin Ryan is played by Seamus Dever and is the more reserved member of the team, now trying to start a family. Now Beckett is the precinct captain.

Beckett is the one who ends up missing in the start of the season. We see Castle now has his daughter working with him at his detective agency. He also finds a new ally in former British M-6 agent Haylee Shipton, played quite well by Toks Olagundoye, who also has a secret past that might be linked to Castle’s missing time. This is a fine example of where this show could have gone. There was a tremendous amount of chemistry here between the three characters, and this could have been a show I would have absolutely watched. Instead we quickly get Beckett back in the mix.

Beckett has decided that Castle would be put in danger as she attempts to catch the elusive and dangerous LokSat. So she splits with him to keep him safe. Of course, he is going to pull out all of the stops to “win” her back. We learn that the LokSat case and Castle’s previous year’s kidnapping are pretty much the same case. It’s been a year since Castle has been missing. Castle discovers that he forgot intentionally and that it would be dangerous to pursue that missing time. Honestly, I thought it was rather clever to put it aside and get back to the formula of the series at times with the mystery hanging over their heads. It would have been a mistake to draw this out in bits and pieces for an entire season. Shows like The Mentalist have taught us that there is such a thing as audience fatigue, and this show smartly avoids it by pushing it away without even looking into it during most of the season. But that can’t last, particularly when it was decided that this would be the final season.

There are a couple of standout episodes that are great just because they play into Castle’s childlike fantasies instead of the big LokSat plot. In The Nose, Castle meets a witness, played by Stephanie Weir, who has a very acute sense of smell but who lives like a hermit because there are too many offensive odors in the world. The two end up having a nice flash of chemistry that could have made her a recurring character in the Castle Investigations show that didn’t happen.  It’s always a treat to see Fillion teaming up with his Firefly pal Adam Baldwin, and it happens for a second time on Castle with the return of edgy cop Detective Slaughter. The two take a pretty whimsical journey as Slaughter has been framed fore murder and needs Castle’s help to clear his name while both are on the run from the cops. In The Blame Game, Castle gets an invitation to collaborate with Stephen King. But it turns into a Saw-like trap that forces him to compete with other abductees for clues and life-and-death decisions.

But let’s be honest. Castle was always so much more entertaining when he starts to believe that the case has entered the world of his flights of fancy. We get some of those this season. In Death Wish he believes the case involves Aladdin’s Magic Lamp and thinks he’s interacting with a genie. Dead Again lets his imagination really soar when a victim survives poisoning, then electrocution, and even being shot in the head. Castle thinks he’s immortal and starts looking for the comic-book angles to create his “origin” story.  Finally there’s Hell To Pay when Castle discovers a hidden vault in his office and believes they are dealing with the Anti-Christ. Maybe he really is; has anyone ever noticed that Stana is an anagram for Satan? These are the shows that make every season of Castle. This is the kind of story that gave the show legs with or without Beckett. I envisioned a kind of Carl Kolchak meets James Rockford. I really want to watch that show. Come on, ABC!

I know there are fans out there who take the show pretty seriously. Now with first-run episodes over, you need your fix. The DVDs aren’t the only way you can get into the show these days. Castle has become a world all on its own. You can now buy actual mystery books in the Heat series written by “Richard Castle”. There is a game and even a Marvel comic book series. Next thing you know they’ll be The Castle Experience at Disney World. This is an ABC/Disney property, after all. Perhaps the prospects of a Castle Investigations show will grow on someone at the network. Until then we’re all on a time-out. “We can have a time-out from our time-out?”

Gino Sassani is a member of the Southeastern Film Critic's Association (SEFCA). He is a film and television critic based in Tampa, Florida. He's also the Senior Editor here at Upcomingdiscs. Gino started reviewing films in the early 1990's as a segment of his local television show Focus. He's an award-winning recording artist for Omega Records. Gino is currently working on his 8th album Merchants & Mercenaries. Gino took over Upcomingdiscs Dec 1, 2008. He works out of a home theater he calls The Reel World. Favorite films: The Godfather, The Godfather Part II, The Body Snatcher (Val Lewton film with Karloff and Lugosi, not the pod people film), Unforgiven, Gladiator, The Lion King, Jaws, Son Of Frankenstein, The Good, The Bad And The Ugly, and Monsters, Inc.
NCIS: Los Angeles: Season 7 The Night Manager – Uncensored Edition (Blu-ray)