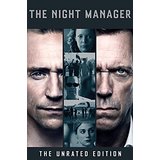 “Anyone can betray anyone.”

The word “spy” tends to conjure images of international intrigue and attractive people getting into exotic adventures. But don’t blame John le Carre. Despite being one of the most successful and prolific spy novelists of the past century, le Carre’s stories tend to be aggressively un-sexy, morally murky tales that focus on the psychological toll of intelligence work. That’s why it’s interesting to find that The Night Manager — a British miniseries that also aired on AMC — manages to straddle both sides of the spy fiction fence.

Jonathan Pine (Tom Hiddleston) is the titular night manager of the Nefertiti Hotel in Cairo. We know he’s unflappable because we meet Pine — who also happens to be a former British soldier — as he calmly makes his way through the streets of Egypt during the zenith of that country’s political unrest in 2011. Sophie Alekan (Aure Atika) is the mistress of one of the hotel’s prominent guests, who is involved in some shady dealings with elusive arms dealer Richard Roper (Hugh Laurie). Pine becomes dangerously entangled in Sophie’s life when she comes to him with details involving an upcoming transaction between Roper and her paramour. He tries to get Sophie’s information to the proper authorities and…it doesn’t go well.

“You’re gonna have to learn to be someone else, aren’t you?”

The action jumps forward four years with Pine working at a hotel in Switzerland and coming face to face with Roper himself. This time, he decides to properly team up with Angela Burr (Olivia Colman), an intelligence operative with a long-standing vendetta against Roper. With minimal support from the British government — certain agencies may or may not be in bed with Roper — Pine and Burr craft a criminal background and an elaborate plan to ingratiate Pine into Roper’s inner circle, which includes statuesque girlfriend Jed (Elizabeth Debicki) and suspicious right-hand man Corky (Tom Hollander). Pine goes on to assume several new personas and gradually gains Roper’s confidence. But can Pine stay focused on his mission (and hang on to his original identity) as he continues to ascend in the criminal underworld or will he be seduced by everything Roper has to offer?

The Night Manager is based on the 1993 le Carre novel of the same name, and it has seamlessly been updated for the contemporary world by screenwriter David Farr. This story has elements that will feel familiar for fans of other le Carre adaptations. (The author himself has a cameo in Ep. 4.) Probably the most obvious comparison is the underrated The Tailor of Panama (starring Geoffrey Rush and Pierce Brosnan): both feature picturesque locales along with a protagonist with a shady past who caters to society’s elite. On its surface, The Night Manager also has more in common with a Bond movie — and not just because Hiddleston is a long-rumored choice to slip into 007’s tux — than with a chilly spy tale like le Carre’s Tinker Tailor Soldier Spy.

But Danish director Susanne Brier also devotes a considerable amount of screen time to the psychological complexities of Pine’s predicament, even if The Night Manager doesn’t fully convince us that our hero will fully break bad. If she comes close, it’s because this big budget production — between $20 and $30 million reportedly — spared no expense in making Pine’s new lifestyle look alluring.

Hiddleston — who broke out in the U.S. by giving humanity and dimension to the villainous Loki in the Marvel Cinematic Universe — is a good choice to play a handsome cipher who wavers back and forth between “good” and “bad.” But while the actor looks excellent in the tailored suits Pine eventually receives, he never taps into the “inner psychopath” that Burr tries to draw out of him. As a result, the character’s inner conflict isn’t as impactful as it could’ve been. There’s no conflict when it comes to Laurie’s performance as Roper: the actor practically purrs all his lines as the dangerous, hugely charismatic arms dealer. Laurie and Hiddleston are similar in stature, so it’s not hard to see Roper regarding Pine as a younger version of himself, which makes for an interesting dynamic.

The talented supporting cast is led by Colman (Broadchurch) as the dedicated, dogged Burr. The fact that the character is pregnant for most of her screen time is almost an afterthought; her focus is Pine’s safety and capturing Roper, so she mostly can’t be bothered with the life she’s carrying around. Hollander steals every scene he’s in as Corky; everything he says sounds like a double entendre, but the character still oozes danger. Debicki cuts a striking figure (and a strong contrast to pregnant Burr), but Jed is — in true le Carre form — too sad and too much in turmoil to be a traditional femme fatale. I’d actually venture to say Debicki sells her character’s inner conflict more convincingly than Hiddleston does.

Overall, the miniseries format favors le Carre stories more than feature films. There’s more space for the writer’s intricate plots and layered characters to breathe. The table-setting first episode of The Night Manager is followed by a tense robbery in Ep. 2. My favorite installment, however, is probably Ep. 5, which takes Pine (and us) deep inside Roper’s world. It sets up a final hour that circles back to where the story started in a satisfying way.

The Night Manager is presented in its original aspect ratio of 1.78:1. The 1080p image is arrived at with an AVC MPEG 4 codec at an average of 25 mbps. This is one of the more versatile small-screen presentations you’ll come across; the story hops from Egypt to the Swiss Alps before progressing to Spain and Turkey. (With occasional stops in characteristically gray, monochrome London.) Fine detail — particularly in the miniseries’ set design — jumps out early on during the first episode, which is largely set in Egypt’s lush Nefertiti Hotel. The highlights, however, are the gorgeous, sun-drenched exterior shots in Majorca, Spain that take up a good chunk of the story’s middle section. This section is so pretty and picturesque that it makes the more darkened sequences in Turkey (and some other low-lit interior scenes) look markedly inferior by comparison. The latter low-lit interiors, in particular, occasionally feature some distracting digital noise. Otherwise, this is a presentation that is as slick and attractive as the world Jonathan Pine gets drawn into.

The DTS-HD Master Audio 5.1 track offers a full-bodied presentation right from the show’s explosive opening credits. Rear speakers burst to life with the same level of dynamic ambient activity during the hectic, violent protests in the streets of Egypt as they do during one of Roper’s swanky parties. The subs get to flex their muscles during Ep. 5, when Roper and Pine Birch show off their deadly merchandise. All that being said, this is still largely a dialogue-driven presentation. Luckily that dialogue is presented impeccably in what is overall an extremely lively and very well-balanced presentation.

The Night Manager: Uncensored Edition features all six episodes on two discs. While it’s a bummer that there are no special features in this set, this high-quality production largely speaks for itself, so it’s not a devastating loss.

The “Uncensored” bits — which I assume where taken out of the version that aired on AMC — include some F-bombs and several instances of (tasteful) nudity. But whether you pick up this version or the slightly tamer cut that American audiences saw on AMC, I definitely recommend you check out The Night Manager.

Castle: Season 8 Friday the 13th: The Series – The Complete Series