Posted in: The Reel World by Archive Authors on September 11th, 2016 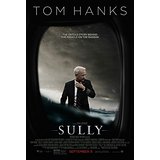 Clint Eastwood is 86 years old. He is also one of the best film directors working today. His latest film shows no signs of a man winding down his life, let alone his career. I obviously hinted that most other actors (or directors) his age have long ago died or checked into a nursing home. Eastwood looks lean and mean and still directs that way. Eastwood is interesting, as well, because he tends to pick projects that are outside the Hollywood studio corporate thinking. In other words, Eastwood is his own man and does pretty much anything he wants. His films as an actor and director have courted controversy way back to the days of Dirty Harry and A Fistful of Dollars. His films as a director and his personal political views are always full of contradictions that suggest a vibrant, searching mind. Sully is Eastwood’s latest film, starring Tom Hanks, and it is deceptively complex as well. On one level, Sully is a textbook depiction of a famous true life event.

On January 15, 2009, Captain Chesley “Sully” (Tom Hanks) Sullenberger piloted a US Airbus A320 from LaGuardia airport. Three minutes into the flight both engines are unprecedentedly hit by a flock of Canada geese (which is the subject of a pretty good joke later in the film) and created 208 seconds of hell for Sullenberger and the other 154 human beings on the US Airways flight. The film starts with a bang, with Sullenberger struggling to control the plane under the worst possible circumstances. This is part of the nightmares that hound the rigorously professional pilot. The fact is that the world is full of people who do difficult and dangerous jobs, and piloting a giant passenger airliner is certainly one of them. But the film also pays tribute to hundreds of other first responders who have to rush to life-and-death emergencies every day. Much of the film is given to second-guessing a top professional who has given a life time of exemplary service. It is fair to compare Sully to Flight starring Denzel Washington, except this time the Captain wasn’t doing cocaine. In this case, we have a serious and earnest man questioning himself despite knowing from years of experience that he has done the right thing. We see the crash played over and over again from different perspectives and with different outcomes, constantly forcing us to think how we would react in a crucial once in a lifetime crisis. Many of the depictions come from the nightmares of Sullenberger showing how thousands might have died if he had crashed into midtown Manhattan. It goes without saying that this has echoes of 9/11, and much of that is addressed head on. It comes back to the fact that Eastwood is his own man. He is one of the few people who could make such a rigorously square movie and pull it off. This is a movie about an honest man with a lifetime of proven integrity forced to defend himself in front of the whole world. This is also a big part of the movie. The world judges someone in an instant in this media-obsessed world.

Sully is full of tension from beginning to end, mainly because we can see how difficult it is to find real justice in the modern world, and I give all the credit in the world to a sharp-as-steel 86-year-old geezer.