Posted in: No Huddle by Jeremy Butler on September 12th, 2016 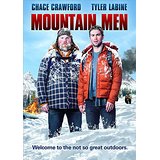 I have a new opinion, newly formed, that Tyler Labine is underrated, because it goes without question that his performance was the crown jewel of Mountain Men, a story about two estranged brothers who find themselves without a vehicle, trapped in the winter wilderness, and must trek their way back to civilization. This movie features some of the quips and brotherly banter that I’ve seen all year. In fact, if it weren’t for the fact that the two look nothing alike, I would be inclined to be believe that they were actually related.

Toph (Labine) is part-time deejay, full-time weed dealer who has just been notified that his girlfriend (Britt Irvin) is pregnant. Cooper (Chace Crawford) is his more successful younger brother, who returns home after a long absence for their mother’s wedding.  Early on it is clear that the family is not very close, and much of that is explained to be in part due to the death of their father. Cooper hasn’t accepted their father’s death because his body was never found, partially due to the fact that their last conversation together was not a happy one. As a result, Cooper stalls signing the documents regarding their father’s estate. Toph, in need of that money due to his situation as well as to try and open up his own business, convinces Cooper to visit their father’s old camping lodge for some brotherly time. Everything that transpires after this is a hilarious adventure in adversity and self-discovery.

As I stated earlier, Tyler Labine is underrated. To me, he has always been that character in the background, the sidekick if you will, but ever since playing Kristen Bell’s love interest in The Boss, he has shown that he has the capacity to lead the charge, as evident in Mountain Men. Labine’s Toph is the essential central character that the story follows. At the beginning he is a somewhat hapless character with no real direction and delusions of being more of a deejay rather than weed seller (when it’s really vice-versa). He is also of the pairing the more likable and relatable character, quick-witted, albeit a bit naïve about certain things, and all too willing to fall in line. Despite that character flaw, he shows the true empathy of the two brothers, and without question is the hero of the story.

Chace Crawford’s Coop may not be the hero, but he has more of an emotional arc in the story than his movie brother. In beginning, I perceived him as callous, but as the story progressed and the more I learned about his situation, specifically his relationship with his father, the character achieves partial redemption in the end. I wouldn’t grant him full redemption, as he was quite the tool, and I hold grudges.

The story remains lighthearted and engaging throughout its runtime, all the while managing to inject a little heart in the right places to make it more than just a comedy. Mountain Men successfully straddles the line between comedy and drama, although the argument can be made for it to be classified as a comedy. Either way, it is an enjoyable experience that can be shared with the entire family, provided that the young ones understand what edibles are.

Jeremy Butler is a film school graduate of the International Academy of Design and Technology. He is been writing for Upcomingdiscs since 2012; however, movies have played a big part of his life for much longer. Favorite genres include horror, science fiction/fantasy, and comedy. Favorite movies are V for Vendetta, Boondocks Saints, Kiss Kiss Bang Bang, and The Godfather.
Sully Live At The Orleans Arena Las Vegas (Blu-ray)