Posted in: No Huddle by Gino Sassani on September 20th, 2016 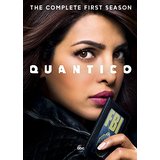 “The state of this country is the most precarious it has ever been. Not only are there more threats than ever before, but the majority of those threats don’t come from known organizations or extremist groups, but our own backyard. A neighbor you grew up next to, a one-night stand you had, perhaps even a family member. You applied here to protect your country from those threats. And while your ideals and your test scores might have gotten you here, they will not be enough to keep you here. The FBI academy is the toughest boot camp, hardest grad school rolled into one. It is not college. It is life and death.”

And that’s the setting of ABC’s new drama Quantico. But not quite so fast. Quantico is the latest series to follow a trend that I honestly find distracting and more than a little annoying. The basic idea of the show appears to be to follow a new group of FBI recruits as they go through six months of training at the FBI training center in Quantico. If that’s the kind of show you were expecting, you are in for some surprises. That’s half the story. The other half uses the How To Get Away With Murder format. There is another story playing out a few months after their graduation. We get pieces of this story intermingled with the training story. Confused? You ain’t heard nothing yet.

The FBI training responsibilities are split between two veteran agents. Both are also poor imitations of other shows’ characters. Miranda Shaw is played by Aunjanue Ellis, and she delivers most of the class lectures. She’s very much a clone of Viola Davis’s character Keating from the already-mentioned How To Get Away With Murder. We get the same dramatically-delivered bullet-point lessons that often provide us with a backdrop to some activity that we’re watching instead of her and the class. The delivery is exactly the same with that same stern face. Like Keating, she’s partnered with a man who has made some really bad mistakes and also sleeps with the students. In this case that would be Agent Liam O’Connor, played by Josh Hopkins. He tends to deliver the instructions for the tasks. These tasks appear straight out of a bad Survivor episode with Hopkins giving us his best Jeff Probst imitation. The tasks even feature elimination from the school by a vote of the winning team. Where have you seen that format before?

Then there are the students. If the FBI’s screening process is as bad as it appears here, this country is in real trouble. Each of these students has devastating secrets, many tied to either terrorist activity, or dangerous cult membership. Not one student here isn’t hiding one of those disqualifying deceptions. Most are incredibly emotionally damaged. They jump in and out of bed with each other in spite of a rule forbidding such activity. I looked hard but just couldn’t find Shonda Rhimes’ name anywhere in the credits. But that’s the kind of show we have here.

The students include Alex Parish (Chopra), who is here without ever telling her family. Her father was an agent who abused her mother, and she ended up shooting him as a little girl. She came here to find out what kind of a person he really was. Her first “contact” is Ryan Booth (McLaughlin). She meets him at a bar before she enters Quantico, and they end up having sex in his car. No surprise to us when we find him also at Quantico. Of course, their meeting was no accident. There’s Simon Asher (Ellington). He’s a computer whiz who is hiding involvement in the Middle East which may have included war crimes. Shelby Wyatt (Braddy) lost her parents during 9/11. That’s her motivation for coming here. Her parents left her a fortune and a thriving company that does military contracts. She carries around a piece of metal from the plane she believed her parents were on. That investigation will reveal big secrets that will compromise her in and out of the FBI. Caleb Haas (Rogers) is the son of the Director of the FBI, Clayton, played by Satan himself Mark Pellegrino, who did double duty last year as Clayton here and Lucifer on Supernatural. His mother is a senator who is running to be the next Vice-President and played by Desperate Housewife Marcia Cross. She is keeping more secrets than anyone here. Caleb’s sleeping with Shelby, who has another bedmate who will really cause some fireworks. Finally we have actress Yasmine Al Massri playing twins Nimah and Raina. It’s a secret that Miranda has arranged. She wants to prove to the FBI that she can works twins undercover as one person so not a soul knows this one person is really two people….played by one person.

The “present” part of the show treats us to all of these secrets and some FBI training just in case we forget the name of the show. The future segments deal with a terrorist attack on New York. Alex has been framed for the attack, and she must elude a national manhunt and the news labeling her as Jihad Jane. All of her classmates get pulled into the conspiracy on one side or the other, often both. There are multiple planned attacks and lots of folks getting killed as the former cadets are forced to follow a nameless voice on a phone to further the terrorist plot. They do this because of threats on their family and friends, but I find it almost impossible to believe that this many FBI-vetted people would basically create terrorist events by blindly following a voice because of threats. They know their actions are actually killing people. It makes for wonderful tense drama. Just try not to think too hard.

Here’s the problem. The cast is an exceptional one. They quickly build up a lot of chemistry, and there are some good things to be found here. I can even live with all of the secret pasts. But the show resorts to a clever trick that isn’t even clever anymore. And it’s totally unnecessary. They could have moved the terrorist plot and the more compelling elements of the future segments and made a pretty compelling drama with the pieces they have in place. There aren’t the usual clues to let you know what time you’re in, and more than once I was caught off guard by where in the whole distorted timeline I was. I’m pretty observant and have quite an appetite for sci-fi, so I’m adept at following shows that stray from a linear presentation. It’s important to have a “tell”. Something different about the colors or the environments. Quantico just moves back and forth with no true guidepost to anchor the audience.

You get all 22 episodes on five discs along with a gag reel, deleted scenes, and a set visit.

The episode titles are one-word affairs that reflect the final word spoken in each. The notable exception is the season finale where I believe the word is implied. The series will certainly change for next season. You never know who is going to survive, and the season saw regulars getting killed. They will no longer be training at Quantico, because they’ve graduated. Not sure how the show’s title allows for the new format. I guess we’ll all see together. There’s hope for this show. It had a rocky start because of the format. Now the characters are established. “That was the hard part but now it’s over.”

Gino Sassani is a member of the Southeastern Film Critic's Association (SEFCA). He is a film and television critic based in Tampa, Florida. He's also the Senior Editor here at Upcomingdiscs. Gino started reviewing films in the early 1990's as a segment of his local television show Focus. He's an award-winning recording artist for Omega Records. Gino is currently working on his 8th album Merchants & Mercenaries. Gino took over Upcomingdiscs Dec 1, 2008. He works out of a home theater he calls The Reel World. Favorite films: The Godfather, The Godfather Part II, The Body Snatcher (Val Lewton film with Karloff and Lugosi, not the pod people film), Unforgiven, Gladiator, The Lion King, Jaws, Son Of Frankenstein, The Good, The Bad And The Ugly, and Monsters, Inc.
CSI: Cyber: The Final Season Wonders Of The Arctic (UHD Bluray) (4K)