Posted in: Disc Reviews by Gino Sassani on September 20th, 2016 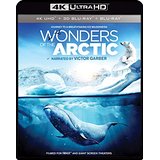 Victor Garber appears to me a man of extremes, at least in his climate preferences. Of course, the actor was aboard James Cameron’s ill-fated Titanic when it struck an iceberg before Leonardo DiCaprio dies because he was too stupid to climb aboard a huge floating door. On television recently, Garber jumps to nuclear fire as one half of the superhero Firestorm in the DC television universe. For this release, actually filmed a few years ago he heads back to the ice, and not just any ice. This time Victor Garber narrates an IMAX documentary called Wonders Of The Arctic. Shout Factory has released the documentary as part of their impressive IMAX titles in 4K on UHD Blu-ray. This one is no less impressive and takes us on a journey to the top of the world, a place we refer to as the Arctic Circle.

The documentary isn’t so much about the Arctic as a region but really is the story of the ice itself and how it impacts on both human and animal populations. It does sound the warnings of climate change, but I give it a lot of credit for not attributing such change to anything in particular. Instead the documentary does what all good documentaries should do. Present us with some facts. Show us some interesting stories. Leave us educated, thrilled and entertained. Wonders of the Arctic actually accomplishes all three of these goals.

Written and directed by David Lickley, he takes his IMAX cameras into some of the most hostile environments on the planet. We meet some people who make this ice their lives. The first story introduces to Shari, who is a scientist descended from the Inuit Indians. She has returned to her roots to set up climate stations to measure wind, temperatures, and the arctic ice itself. She teams up with one of the area’s elders, Illcook, who has a reputation for being very good at predicting the rather unpredictable weather in the Arctic. The piece shows us the combination of cutting edge technology working hand in hand with traditional instincts and skills that have been handed down for hundreds of years. We also meet the crew of an ice-cutter and witness the challenges they face attempting to keep some of the waterways clear.

Of course, it’s not just humans that make this place their home. We get to see how a small down in Manitoba protects kids who are trick-or-treating from the polar bears who sometimes wander into the town. We go under the ice to see the diversity of plant and animal life that lives in the oxygen-rich cold water.

If there is a flaw here, it is that these stories are told too quickly to really get any kind of in-depth knowledge about any of them. There doesn’t appear to be any kind of logical segue from one segment to another. I particularly would have enjoyed more of the interactions in the Inuit village. They say that when you see an iceberg only a small fraction of its actual size is visible above the water. Most of it lies hidden underneath. That’s the impression I got of these stories. We just barely scratched the surface. Of course, you have to move quickly when you only have 40 minutes in which to say all you need/want to say. I shouldn’t have to tell you that it’s the wonderful photography that drives the feature.

Wonders of the Arctic is presented in an aspect ratio of 1.78:1. The ultra high-definition  image is arrived at by an HEVC codec. There are some issues with ratios here. There are a few scenes that are stretched from their original aspect ratio, and it’s not a subtle issue. Fortunately, most of this looks pretty solid in that respect. The ultra high-definition image presentation is truly a thing of beauty. You might not think that there could be much variety or beauty to be found in an Arctic wasteland. You would be very wrong. There are subtle colors of blue and even green present in some of these frozen oceanic monuments. The 4K presentation really brings those nuanced colors and shades. The white is delivered without blinding artifact to reduce the sharpness or detail. Colors are brilliant when they need to be. Reds are perhaps a tad too brilliant. You might need to adjust your own color saturation or reds will become blinding orange fluorescents. As I mentioned before, these release color engineers are still learning the 4K technology, and the temptation to nudge those colors exists simply because you can. You now have the ability to dominate bright and vivid colors. Soon they’ll learn to be more self-disciplined… I hope. Otherwise this is a wonderfully visually exciting image presentation.

The 3D disc provides a nice MVC codec at about 29/12 mbps. This isn’t the kind of feature with a lot of depth reference, so I didn’t find this version as immersive. I’d stick with the 4K here, to be sure.

The Dolby Atmos presentation defaults to a nice 7.1 track. Of course, the narration is front and center and perfectly clean. The surrounds mostly boost the folksy score and provide us with some instances of wind and whale echoes when we’re beneath the surface. There’s nothing terribly aggressive here, nor should there be. Your attention is directly to the screen, and that’s where it belongs.

The only extra here is a commercial.

Shout continues to impress with this series. There’s plenty of material out there to keep them busy for a long time, and I suspect these make good entry-level discs for those of you just getting your feet wet in the format. Those toes are going to get a little cold here, so be sure to drink lots of warm tea to stave off frostbite. That’s how real some of this can appear. So join me and Shout Factory “at the top of the world”.

Gino Sassani is a member of the Southeastern Film Critic's Association (SEFCA). He is a film and television critic based in Tampa, Florida. He's also the Senior Editor here at Upcomingdiscs. Gino started reviewing films in the early 1990's as a segment of his local television show Focus. He's an award-winning recording artist for Omega Records. Gino is currently working on his 8th album Merchants & Mercenaries. Gino took over Upcomingdiscs Dec 1, 2008. He works out of a home theater he calls The Reel World. Favorite films: The Godfather, The Godfather Part II, The Body Snatcher (Val Lewton film with Karloff and Lugosi, not the pod people film), Unforgiven, Gladiator, The Lion King, Jaws, Son Of Frankenstein, The Good, The Bad And The Ugly, and Monsters, Inc.
Quantico: Season 1 Gunsmoke: The Twelfth Season