The Good Wife: The Final Season

Posted in: No Huddle by Gino Sassani on September 27th, 2016 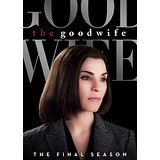 The title might be a bit misleading. Alicia is not so “good” these days. She’s tougher and more willing to make the hard choices. She’s more cutthroat in court and even when it comes to asserting her position in the firm and with her cheating husband. This is not the “stand by your man” show it might have appeared to be when it began. It’s evolved, and that only makes for better television. And now that it has finally come to an end, it’s easy to see that Alicia is now just as calculating and manipulative as her husband ever was. If the show was going to stay on the air, there might have been need for the title to change. Of course, I always took it as ironic anyway. Fans will have all the time in the world now to debate such subjects.

The series is not really a lawyer procedural, at least not on the surface. The show was never about anything else but Alicia and the people who would come in and out of her orbit. Of course, one of the most important of these was always Will Gardner, played by Josh Charles. For the first five years the show was about their complicated relationship. For most of that time there was a back-and-forth both in Alicia’s feelings and in her sometimes illogical actions. But Charles left the show in Season 5, and there has absolutely been a bit of a void in both the show and Alicia’s life. She has become far more cold and calculating. It’s almost as if the last bit of feeling died with Will. She’s still dealing with it in the final season. Fans of Josh Charles and his character will be overjoyed to hear that he had a return for the final episode. Of course, he’s just an image in Alicia’s head, but fans will respond to that material. In fact, it leads to the season’s best episode as Alicia daydreams about how her life would have gone with both Peter (Noth) and Will and a new player. That new player is Jason Crouse, and he’s played by Supernatural Daddy Jeffrey Dean Morgan.

Morgan adds new life to the series even as it comes to its end. In many ways I wish this character had been there from the start. Nothing against Josh Charles, but Jeffrey Dean Morgan has instant chemistry with Julianna Margulies. This relationship could have made the last five years much more interesting. He’s not quite the even person that Will was. He has a temper and an overall more animated emotional character. By the end she must decide between her husband and Jason. It’s the same kind of back-and-forth we were presented with all through the show, but one gets an impression the choice is real this time. It’s appropriate that she fantasizes about the three lives. I think it’s the perfect reflection of what the fans have likely been doing all along.

Michael J. Fox, of course, returns to play Canning. It’s a shame that Archie Panjabi is gone as Kalinda. She had been one of my favorite characters on the show, and Cush Jumbo’s Luca Quinn attempts to fill that void, but it’s never the same. Luca can never replace Kalinda the way that Jason so perfectly replaced Will.

I like the fact that this series is not so single-minded. I’ve never been a huge fan of Chris Noth going back to his Law & Order days, but I have to admit he plays the slimy politician quite well here. His story starts out slowly and builds as we get closer to the end of the series, but he’s always there even if in the background. The writers have done a superb job of balancing these show arcs with compelling legal drama. In the end you have something quite fresh and original here even after seven years. It doesn’t hurt that there are some familiar situations that are obviously inspired by the political and real-life scandals. You get all 22 episodes along with a farewell to Alicia, a feature on the music, and wrap party.

The Good Wife is riding off into the sunset, but this television world is not coming to an end just yet. Not much is known about it just yet. I suspect that will change now that the final season of The Good Wife is out on shelves. You get your chance to sit back and wonder “What was that like?”

Gino Sassani is a member of the Southeastern Film Critic's Association (SEFCA). He is a film and television critic based in Tampa, Florida. He's also the Senior Editor here at Upcomingdiscs. Gino started reviewing films in the early 1990's as a segment of his local television show Focus. He's an award-winning recording artist for Omega Records. Gino is currently working on his 8th album Merchants & Mercenaries. Gino took over Upcomingdiscs Dec 1, 2008. He works out of a home theater he calls The Reel World. Favorite films: The Godfather, The Godfather Part II, The Body Snatcher (Val Lewton film with Karloff and Lugosi, not the pod people film), Unforgiven, Gladiator, The Lion King, Jaws, Son Of Frankenstein, The Good, The Bad And The Ugly, and Monsters, Inc.
Tuesday Round Up: September 27, 2016 The Catch: Season 1