Posted in: No Huddle by Gino Sassani on September 28th, 2016 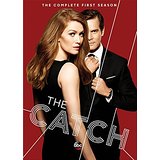 Shonda Rhimes now has a fourth series running on ABC this past season. Joining Scandal, Grey’s Anatomy, and How To Get Away With Murder is the new series The Catch. The series is based on a series of novels by Kate Atkinson and was actually created by Jennifer Schuur. And while The Catch distinguishes itself rather nicely from the usual Rhimes formula, you can still expect the bed-jumping antics that Rhimes is so obsessed with. It’s the one thing that all four shows have in common. It doesn’t matter whether she’s a writer, creator, or just a producer; there’s never been an episode of a series with her name on it that doesn’t have plenty of sex. In this case it’s a sad distraction from what turned out to be a rather clever show.

Alice Vaughan (Enos) helps run one of L.A.’s elite private investigation and security firms. She was engaged to Christopher Hall (Krause) whom she has been with for a year. In the pilot it all comes crashing down. Christopher’s real name is Ben Jones, and he’s been running a con the entire year. He’s gotten close to Alice in order to put himself and his partner Margot (Walger) in a position to steal from the firm and its wealthy clients. The sting backfires and the firm is saved, but that’s not going to be the end of the story. Alice decides she’s going to track him down and put him away for what he tried to do. But when she does track him down in the middle of another sting, he claims his feelings for her were real and tries to warn her against digging too deep.

Alice has good reason to be afraid. Ben and Margot worked for an international crime organization called The Firm. They had to pay to go out on their own, and if they can’t come up with $15 million a month The Firm sends collector, translate that to killer, Felicity (Ghai). Ghai doesn’t get near enough screen time on the show, and that’s a huge loss. It’s a rather complicated background that comes together in pieces throughout the ten-episode run of the first season.

The episodes are told from three perspectives at various times along the way. When Alice is in a reflective mood, we get flashbacks to some of the intimate moments of her year with Chris/Ben. Of course, since this is a Rhimes show, those moments almost always happen in a bedroom. We also get the case of the week from the firm. They also have to do work for clients that range from a woman who was poisoned in an MS drug trial to a female military officer who is being harassed because she passed combat training. The third perspective involves whatever con Ben has going with Margot and their third partner, Reggie (Lennox). All the while an FBI/Interpol Agent Dao enters the picture, trying to use Alice to get to Ben.

These relationships are constantly changing, and that’s one of the things I like about the show. Sides switch with ease, and everyone, including Alice, has a personal agenda that makes her both an enemy and at times an ally for Ben. Dao ends up being a romantic interest for Alice’s newly divorced partner Valarie (Rollins). Did I mention Rhimes was involved in the show? But things really get good when Rhys shows up, played by John Simm. He’s a dynamic character who is a ton of fun to watch, and he changes the pieces in so many ways. He’s Margot’s brother and Ben’s old crime partner. Most of all he’s in charge of The Firm and is a rather spoiled and demanding sort of guy. He’s also nostalgic for the old days and wants “Bad Benji” to be his partner again. But he also has his and The Firm’s interest to deal with, and he’s the kind of guy who will shoot anyone just for the fun of it. He’s an entertaining character, to be sure. But he’s also a dangerous one. Things get even tighter when Mum Sybil (Nicol) comes to town. She’s the real head of the organization, and we learn a lot about how the characters got to be who they are now through her. She’s not near as entertaining as Rhys but essential to keep this ever-changing plot moving along.

It all takes a short while to grow on you. I was at first put off by the lack of chemistry between Krause and Enos. In fact I find her to be the weak link in the acting chain here. It’s a good thing there is a tremendous supporting cast here, because I have to say I don’t see too many chops in Enos’s acting skills. She has a rather odd look that is also a bit off-putting. It’s a mystery to me that any group of people looked at her and many other actors and thought she was perfect for the part. She drags the first couple of episodes down. It’s not until all of the other players have been placed in the playing field that the show improves dramatically. With such a weak pilot, it’s a bit amazing the show was picked up. Be glad it was, because this is a series that actually improves with time.

I’m happy that the plot ceases to drag. Certainly there are elements they are trying to hold out for dramatic suspense. Still, the series moves at a quick pace. There are only 10 episodes here, and you’ll be a bit amazed at how much story and character evolution you end up getting in just eight hours of material. That’s even with the slowdown for the obligatory sex scenes. Yes, pretty much everyone has a relationship with everyone else. I should have mentioned at the top that Shonda Rhimes is associated with the series.

It’s a slimmed-down release. You get 10 episodes on two discs with just a few deleted scenes and a blooper reel for extras.

The series stays clever and fresh right up to the season finale which promises even more changes for the beginning of next season. Just what those changes might be? I intend to “watch and find out”.

Gino Sassani is a member of the Southeastern Film Critic's Association (SEFCA). He is a film and television critic based in Tampa, Florida. He's also the Senior Editor here at Upcomingdiscs. Gino started reviewing films in the early 1990's as a segment of his local television show Focus. He's an award-winning recording artist for Omega Records. Gino is currently working on his 8th album Merchants & Mercenaries. Gino took over Upcomingdiscs Dec 1, 2008. He works out of a home theater he calls The Reel World. Favorite films: The Godfather, The Godfather Part II, The Body Snatcher (Val Lewton film with Karloff and Lugosi, not the pod people film), Unforgiven, Gladiator, The Lion King, Jaws, Son Of Frankenstein, The Good, The Bad And The Ugly, and Monsters, Inc.
The Good Wife: The Final Season Aliens: 30th Anniversary Edition (Blu-ray)