Posted in: No Huddle by Gino Sassani on October 5th, 2016 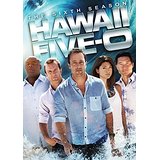 It’s been 30 years since we first heard that phrase. Still it persisted in the modern lexicon along with the term Five-0, which is still shouted in high-crime areas in cities all over the country whenever a police presence is felt closing in on the bad guys. Hawaii Five-0 ended in 1980. That’s when Tom Selleck took over the sets and production crew on Hawaii to work as Magnum P.I. until 1988 when it all closed down for good — or did it? Wouldn’t you know it, the show has been resurrected and become the hottest drama on television. A younger Steve McGarrett and company are back in action and Hawaii …the world might never be the same again. Not sure what I’m talking about? You’ve got five seasons of the new Hawaii Five-O to catch up on. Let’s give you the quick 411. Roll wave…

Steve McGarrett (O’Loughlin) is a Navy Seal, and his last mission ended with the murder of his father. The governor of Hawaii has offered him a special unit with complete immunity and means to tackle the tough cases and look into his father’s death. He’s allowed to assemble his own team. His first choice becomes his own partner. Danny “Danno” Williams (Caan) is a detective on the Honolulu Police Department assigned to his father’s case. He’s a divorced father of a young girl. The two work well together, but there’s a ton of buddy-cop bickering on this one. Next on the team is Chin Ho Kelly (Kim). He’s a disgraced Honolulu officer who was accused of stealing a ton of money. He didn’t do it but ended up resigning in shame. He was Steve’s father’s last partner when he was a cop, and Steve believes in him and brings him on board. The next member of the team is Chin’s cousin. She’s Kono (Park), and she’s the bright-eyed rookie with high ideals and a knack for sophisticated tech, a competition-level surfer. Newer members of the team include Heroes‘ Masi Oka as the medical examiner, Dr. Max Bergman. Like his previous character, he’s a bit of a sci-fi geek. It took some getting used to to listen to the techno-babble medical stuff that he delivers now. Chi McBride returns, but no longer as the city’s SWAT captain who doesn’t always get along with Steve at all. The two have now become tight buddies, and he’s on the Five-O team. Lost’s Jorge Garcia is now a regular. He plays conspiracy theory guru Jerry Ortega, who has become a real heart for the team. He finally gets an office but pines away for that badge. It’s even harder when he sees newcomer Julie Benz from Dexter join the team as Inspector Abby Dunn. She’s a San Francisco cop who was originally sent here to spy on the team. Now she’s a newly-minted regular. One of the surprise breakouts is local actor Taylor Wily as Kamekone. He’s the show’s Huggy Bear. He owns a shave ice company, but he’s an ex-con with a lot of connections. He’s a huge-looking guy with a heart of gold. This amateur steals every scene he’s in.

This year The Sopranos’ Michael Imperioli continues his recurring role as con man Odell Martin. Turns out our favorite Island barber is also a lawyer. That leads to a My Cousin Vinny episode that is one of the most lighthearted of the show. He always was a good balance of humor and dead serious on The Sopranos, and it’s no surprise that he can deliver the comedy here.

The season opens with a rather ambitious scene that they pull off perfectly. We go back in time to the days of the pirates and witness an old pirate invasion of Hawaii. It’s loaded with wonderful pirate characters and a theme that’s almost very familiar from a series of films featuring a certain Captain Jack. The scene features a horizon loaded with ships and a period Hawaii that looks quite good. Of course, it all leads to a present-day case, and it leads the team on a search for buried pirate treasure led by, of course, Jerry. It’s hard to top such a great season opening episode, but there are plenty of memorable moments that follow.

Five-O goes Breaking Bad when Danny goes undercover as a college economics professor after a professor who tapped one of his drug-selling students to partner with him in a pot business turns up dead. The dead professor was eaten by pigs. So while the team, and by the team I mean poor Jerry, waits for the pigs to poop evidence, Danny has to deal with flirting female students and a killer on campus.

The big bad of the season turns out to be Gabriel Waincroft (Sean), who is taking out all of the competition for drugs on the Island. He ends up helping Adam and Kono out of their jam with the cartels. Of course, he’s the one who put them in danger when he steals the money they were going to use to buy Adam’s freedom. It all ends up with Adam serving a short sentence for killing thugs sent to take him out. That sentence gets complicated when he is unwittingly part of a jail break that goes terribly wrong because one of the escapees is a serial killer who just can’t help himself.  Gabriel ends up at the center of most of the season’s violence and trouble. He’s the season’s surrogate for Wo Fat.

Catherine returns at the beginning of the season, but there’s a reason you won’t see her return to the opening credits. She’s really there to close that thread and give Steve a reason to move on and find a new girl. That girl shows up as Sarah Carter, who plays Lynn Downey. Theirfirst date doesn’t go so well. They are snorkeling near a remote island where a bad guy has a camp set up. More running for their lives gives Lynn a real introduction of what it’s like to hang with these guys. That happens a bit too often on this show. You can count on trouble whenever any of these guys tries a little getaway. I know it’s a plot as old as television itself, but this series uses it a bit too often, in my opinion.

One of the most dramatic shows has to be Grover going back to Chicago to confront his old friend Clay Matthews, played by Mykelti Williamson. Grover shows up and unleashes his rage in actions you would think there was no coming back from. It’s amazing that he gets away with it, but does he? In a later episode his actions put him and his family on the run from a mobster that Clay puts onto Grover. They end up running in the jungle, and it looks bad for Grover and his family. Turns out they were in a kind of witness protection program. I think Grover has too high profile of a job for that to make any sense.

Upcomingdiscs’ old friend Joe Dante directs a very creepy Halloween episode. A serial killer is trying to put his dead girlfriend back together from pieces of girls he kills. We have a blood bank robbery, serial killers, and stitched corpses. It’s a nice nod to the old horror films for which Dante shares so much love. We chatted about such things a couple of years ago. You can listen to that chat Here.

Even Kamekona (Wily) gets his own episode away from the wisecracks and shrimp sales. We get to see his childhood and the criminal life he left behind. When his old partner gets out of jail he wants Kamekona to come back into that life. He has to work to take his friend down, and it’s one of the most emotional episodes of the series. They did a good job of casting his younger self. Somehow the show continues to serve so many characters in this ever-growing cast.

This is not your father’s Hawaii 5-0. The first thing you need to know is that there have been a lot of changes to the formula. Steve McGarrett is a much younger, hipper, and more active. He no longer rolls in at the cleanup to bark orders. This Steve is an ex-Navy Seal who is quite accomplished at weapons and hand-to-hand combat. He’s the primary investigator in the whole thing. Alex O’Loughlin has been trying hard to get a successful series running. He started out as a vampire on the short-lived Moonlight and went on to another series called Three Rivers, which lasted even fewer episodes. But give the television executives some rare credit here for believing he could run a quality show. It looks like the third time really is the charm. There’s a lot more action and explosive f/x than you ever could have imagined in the 70’s show. It’s a faster-paced show, and the team has the latest in technology to use on their cases.

So with all of these changes, what makes this show work so well? The most important element has to be the characters and the actors who play them. O’Loughlin and Caan develop almost instant chemistry, although I do think they take the bickering banter a little too far sometimes. When last we saw Daniel Dae Kim, he was finishing his six years on Lost, also filmed in Hawaii. Lucky for us he got the job. Lucky for us, too, he’s quite good in the role, and it’s nice to see him have a more active and English-fluent character. Grace Park comes from the new Battlestar Galactica and brings probably the most balanced character to the show. She actually has a life outside of the office. She’s the geek smart member of the team, and she can kick butt as well as the guys. You can really see a lot of Scott Caan’s father, James Caan, in the kid. He has those manners of speech that remind us of Sonny Corleone. He’s a huge find for this series. These characters might not reflect anything from their earlier counterparts, but they are all very compelling in the way they work together. It’s a nice team, and the Hawaiian locations don’t hurt any either. So often in my reviews of this show it goes back to the characters.

You get all 25 episodes on six discs with a gag reel, stunt feature, season summery, casting guest stars feature, and a behind-the-scenes tour with Alex O’Loughlin. It’s another strong season. I feel like I’ve watched so much of this stuff, “I feel a badge coming my way”.

Gino Sassani is a member of the Southeastern Film Critic's Association (SEFCA). He is a film and television critic based in Tampa, Florida. He's also the Senior Editor here at Upcomingdiscs. Gino started reviewing films in the early 1990's as a segment of his local television show Focus. He's an award-winning recording artist for Omega Records. Gino is currently working on his 8th album Merchants & Mercenaries. Gino took over Upcomingdiscs Dec 1, 2008. He works out of a home theater he calls The Reel World. Favorite films: The Godfather, The Godfather Part II, The Body Snatcher (Val Lewton film with Karloff and Lugosi, not the pod people film), Unforgiven, Gladiator, The Lion King, Jaws, Son Of Frankenstein, The Good, The Bad And The Ugly, and Monsters, Inc.
Tuesday Round Up: October 4, 2016 Central Intelligence ( UHD Blu-ray (4K)