Posted in: No Huddle by Gino Sassani on October 7th, 2016 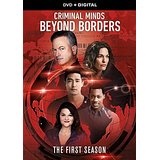 “Over 68 million Americans leave the safety of our borders every year. If danger strikes, the FBI’s International Response Team (IRT) is called into action.”

In these days of international terrorism, I’m not sure that anyone feels particularly safe here or abroad. If recent events have taught us anything at all, it’s that evil knows no country and that no quarter is completely safe. You would also get the idea that terrorism is one of the biggest issues this IRT deals with. The first 13 episodes of Criminal Minds: Beyond Borders don’t really deal with that kind of danger with the single exception one episode.

This is the second attempt to turn the popular Criminal Minds series into a franchise. A couple of seasons ago we were introduced to Criminal Minds: Suspect Behavior. The cast varied from the great Forest Whitaker to the incredibly untalented Jeneane Garofalo. This show differed from the original by giving us more from the point of view of the killers themselves. The show only lasted a half season and was gone before we really got to know it. The same thing won’t be true of Criminal Minds: Beyond Borders. It was a mid-season replacement last season and only got a 13-episode run. That’s going to change this season. It has been picked up and will finally help establish that Criminal Minds franchise.

Beyond Borders owes its success to a couple of important factors. The first is the very nature of the premise itself. Each week the IRT travels to a foreign country where an American has been killed in suspicious circumstances, kidnapped, or in some kind of danger. Most of the episodes deal with kids or young folks often off on their first adventures abroad. They meet up with a deadly stranger or wander into the wrong part of town. This premise allows for each show to be visually different. Of course, the production doesn’t travel to a new country every week. But the production design guys do a great job of finding these elements of culture, geography, and architecture in and around southern California. Add in some establishment shots of the real thing, and each week you get transported to a new place on the globe. The travelogue aspect of the show absolutely establishes the series as something new and interesting.

The second smart move was the casting. While Whitaker is one of the best, the rest of the Suspect Behavior cast was either boring, inept, or simply didn’t share any chemistry. This series is populated with a good team of actors who work well enough together that the story can be set with the team already established and running for some time already. And it all starts at the top. This isn’t the first franchise rodeo for Gary Sinise. He also led the team in the second CSI series set in New York City. Sinise has that wonderful ability to project firm authority yet still be incredibly accessible and an emotional center for his team. Here he plays Jack Garrett, who has been running the team for years. He already has working relationships in most of the countries and is always running into “old friends”. Alana De La Garza is the female lead as Agent Clara Segar. She has just recently rejoined the team after an extended leave of absence to mourn the death of her husband. The character is still grieving and brings us more into the emotional ground that’s covered here through the eyes of her hurting character. That’s not to say she isn’t a strong character. She’s not pining away all of the time. It’s a subtle element brought out in some interactions with Jack and through the actor’s own ability to deliver nuance. We know the least about Agent Matt Simmons, played by Daniel Henney. He’s often the legman and is out scouting on the motorcycle they carry on their plane along with other vehicles. He’s also the security expert, which means he’s the muscle of the group. Annie Funk plays the medical examiner on the team, Dr. Mae Jarvis. While the actress does a fine job, she’s the weak link in the cast for me. I can’t really tell you why, but I don’t buy her as a medical examiner at all. I’m not sure if it’s the writing or the fact she appears a bit too awkward for that kind of work. The writers must also notice this, because she’s rarely working on the bodies. Finally, there has to be the techie who stays home and does all the hacking stuff. That duty falls to Tyler James Williams as Russ “Monty” Montgomery. He’s the voice at the other end of the phone or video conference who handles the research and computer-whiz tasks. There’s an episode where he is visited by the mothership’s counterpart, the lovable Kirsten Vangsness as Garcia. They appear to have a bit of a practical joke rivalry going on. The only other member of the original show to make an appearance is a short cameo by Joe Mantegna’s Agent Rossi in the pilot.

I’m a bit surprised that the team is often presented as a bit of the stereotypical American bully. In most of the countries they visit they take charge and don’t often have the complete support or backing of the native police forces. In some cases they are in a country where women do not occupy places of authority, and that creates issues for the two female members of the team. Whatever the source of conflict, Jack gets in their face, forces them to back down, and ends up acting like a buddy as the team prepares to leave. Still, the series does a pretty fine job of showing these diverse cultures and how they relate to ours. How do you protect an American woman in a country where domestic violence is not a crime? Those are the kinds of questions the new series tackles each week.

The show differs from the mothership in another important way. The killers aren’t quite so creative or gruesome here. The show puts the accent on the exotic locations more than the exotic nature of the killers. The writers appear to be compensating a bit too much by returning to the same kind of story too often. Many of these episodes deal with killers plugged into some kind of ancient local ritual. It’s certainly a cool idea and a fast window into the history of these various countries. I think it’s used as a crutch here and keeps the show from spreading its wings a bit more. There are some notable exceptions here. One of the most ambitious and my favorite from the season involves a plot to lure a girl to a Middle East country to meet her lover who was deported from America. She’s being manipulated into carrying out a terrorist plot.

You get all 13 episodes and a couple of brief features on the locations and cast. There are a few deleted scenes and a gag reel. Overall this season was a promising start. I’d like to see Sinise and his team turn this into the ten-year affair he did with CSI: New York. He’s certainly got the chops for the job, and the locations and stories are endless here. They can tell stories that would be awkward and a stretch for the mothership. I can’t imagine there’s any shortage of ideas. “Good to see that some things never change.”

Gino Sassani is a member of the Southeastern Film Critic's Association (SEFCA). He is a film and television critic based in Tampa, Florida. He's also the Senior Editor here at Upcomingdiscs. Gino started reviewing films in the early 1990's as a segment of his local television show Focus. He's an award-winning recording artist for Omega Records. Gino is currently working on his 8th album Merchants & Mercenaries. Gino took over Upcomingdiscs Dec 1, 2008. He works out of a home theater he calls The Reel World. Favorite films: The Godfather, The Godfather Part II, The Body Snatcher (Val Lewton film with Karloff and Lugosi, not the pod people film), Unforgiven, Gladiator, The Lion King, Jaws, Son Of Frankenstein, The Good, The Bad And The Ugly, and Monsters, Inc.
“31 Nights Of Terror” The Neon Demon (Blu-ray) Banshee: The Complete Fourth Season (Blu-ray)